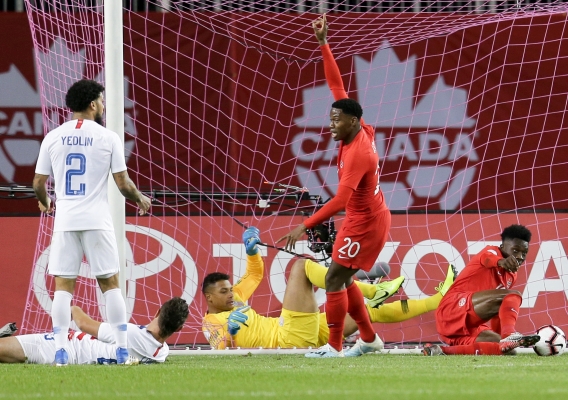 For over a month, Canada was talking about wanting to beat the United States. Last night, they backed up their talk over a U.S. team that lacked desire and had neither desire nor confidence. That should be a huge concern.
BY Brian Sciaretta Posted
October 15, 2019
8:00 PM
ONCE AGAIN, the United States national team finds itself in a crisis point. After the failure of the team to qualify for the 2018 World Cup and a lost generation of players, it was always going to entail a tricky rebuild. Of course, there were going to be bumps and setbacks along the way. But a crisis?

The U.S. team was thoroughly played off the field by Canada on Tuesday night in a 2-0 loss in Toronto. And the loss could have been far worse too. The U.S. team dodged a bullet when Mark Anthony Kaye had to leave the game early with a hamstring injury.

Once again, the U.S. team was disjointed and the most telling fact is that the U.S. team played far, far below the sum of its parts. Canada has some similarities with the U.S. right now in terms of the make up of its players. Both teams still have portions of its core that play domestically (and it can be argued that many of the domestic-based players for the U.S. team are in better form with their clubs too). Both teams also have a number of young players who have moved to big European teams.

But in terms of the ability to take a group of players and put them into a collective unit? That was not similar at all. Canada had a true collective unit on the field with properly defined roles. The U.S. team had players who looked like deer in the headlights.

It’s hard to say no one saw this coming. Canadian players and fans have been talking about this game for months. They wanted this game. The knew they could win it.

Following the game, Gregg Berhalter said he was disappointed by a lack of desire. That’s telling because that is on him. What is also telling is that confidence and desire go hand in hand. A lack of desire is often a symptom of problem, not the problem itself. What's the reason for a lack of desire?

Teams only have desire if they are confident in what they are doing. This U.S. team has no basis at all to feel confident. With performance after performance, there is no sense of that this team can play beyond its talent level and play with team it used to.

For old-time fans, it’s particularly disappointing because the very elements that the U.S. team is missing right now used to be its hallmark.


This is a shocking mentality against a team you haven't lost to in 34 years.

If a Juve coach gave this quote after a loss at Barcelona, he'd be fired in the morning. pic.twitter.com/95qsRCFTgD

In the 1990 and into first few years of the millennium, the U.S. team used to come together and almost will itself to win games few people thought were possible. Beating Argentina 3-0 at the 1995 Copa America, beating the likes of Portugal and Colombia at the World Cup, never letting Mexico push its way around (particularly at home). These results came with desire and confidence. The system and team culture were built on a philosophy of always being one of the hardest working national teams in the world. It often a direct style that wasn’t always attractive soccer, but it was effective.

Then heading towards 2009 and 2010, the U.S. team just added better players onto this system and team culture. Right now, the U.S. team is trying to add some decent players into a system that isn’t working. Having players at Chelsea, Schalke, Werder Bremen, and Newcastle is fine but it only works if the system works and the culture is positive.

One retired former U.S. national team player put it best to me recently when he asked: “Why can’t we just look to be a better version of ourselves?” What he meant was that he hoped the U.S. team would always keep its old identity while looking to improve the player pool in future generations. But somewhere along the way, the U.S. team lost its core identity. Of course, this predates Berhalter (the 2015 Gold Cup was the first time it was apparent that opponents were outworking the U.S. team on a regular basis), but so far, Berhalter isn’t doing much to fix the problem despite trying to overhaul the player pool.

Watching Canada last night was like watching the old United States games when the team was looking to make a name for itself in the international arena. The players always had a chip on their shoulder trying to change the perception that Americans didn’t play this sport. The U.S. team lost games during that era, for sure, but it was never due to a lack of desire or confidence. The team’s reputation is that it always worked extremely hard and treated every game as final. That was Canada last night.


Have you ever played a video game or board game where you committed to a clever, complex strategy, then 2/3 of the way through realized that it just won't quite work? And that you've overthought at least a couple elements of the plan?

Berhalter’s admission of a lack of desire on the team is alarming. The core bedrock principle of the best-performing U.S. teams (that he was also a part of) is missing. And it’s tough to get back.

It’s at a point where Berhalter is at a crossroads. The Canada game was a perfect representation of a World Cup qualifier and the U.S. team failed miserably. It is on him to have this team believing they can get results in hostile environments, punch above their weight, and then compete against very good teams. Right now, that seems to be getting further away with every passing international window.