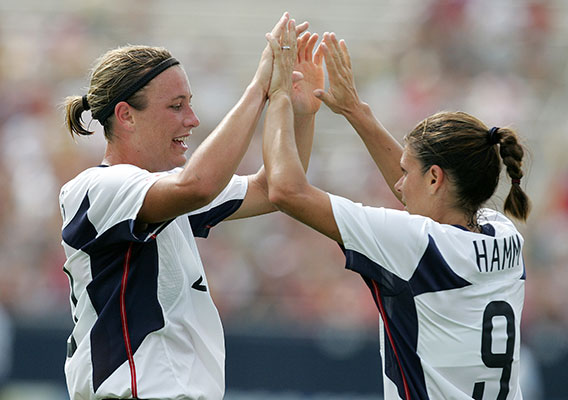 BY Maura Gladys Posted
January 09, 2013
6:06 AM
Evolution is hard. Especially for a soccer player. On Monday night in Zurich, Abby Wambach stood in front of the world’s soccer elite as a product of evolution. For the first time in 11 years, an American was voted the best female soccer player on the planet. That it has taken Wambach so long to win the honor isn’t an accurate reflection of the trajectory of her career. Rather, the timing of the award symbolizes the convergence of three of the most storied names in the short but remarkable line of American strikers. To get to Zurich, Wambach’s game had to evolve. But before something can evolve, it needs to be created. In 2001, as a raw, aggressive All-American out of the University of Florida, Wambach had natural talent, spirit, and aggressiveness. But she lacked the confidence and poise needed to establish herself as a high-caliber scorer on an international level. Whether it was luck, fate, smart business, ingenious strategy, or a mix of all four, Wambach was drafted second overall by the Washington Freedom in the 2002 WUSA draft. In Washington, she played alongside the last America woman to win the FIFA Women’s Player of the Year award, the already-legendary Mia Hamm. In fact, Hamm had accepted the award a few months before the duo teamed up for the first time. “For me that was a defining moment for my career,” Wambach said in an interview. “Coming out of college, I’m young, I don’t know anything, and I just wanted to soak in as much information as possible, and who better to do it than with Mia. She really was able to give me the abilities and the knowledge, and allow me to express myself."   Wambach thrived. She scored 10 WUSA goals in 2002 and 13 the next season, leading the Freedom to the Founders Cup title. The duo also paired up at the 2004 Olympic Games in Greece, helping the U.S. to the gold medal. Wambach scored the gold-medal winning goal in overtime against Brazil, and Hamm carried the U.S. flag in the closing ceremonies of the Games, a symbolic and literal passing of the torch. As Wambach’s confidence and vision grew, Hamm inched closer to retirement, knowing she was leaving the game in good hands. "When Mia was getting a little bit older, she let me do most of the grunt work," Wambach said. "I was the one making more runs but she also broke down teams cerebrally. And for me, I didn’t know why she was so good at the time. She was so good because she used my talents as her strengths.” Hamm helped foster the creation of Wambach’s talents, then Wambach improved on her own. She still uses her granite frame to edge out opponents, but she also capitalized on chances, putting herself in better positions and creating more goal-scoring opportunities. By the time Hamm retired in 2004, Wambach consistently stood out as the United States’ most dangerous threat and was slowly chipping away at Hamm’s all-time goal record of 158. Youthful spirit and aggressiveness developed into fiery leadership and a will and determination that demanded belief from her teammates, from coaches, from fans, from everybody. Her force was nowhere more apparent than at the 2011 Women’s World Cup where Wambach seized matches by the throat, compelling her teammates to raise their games. But age, time, and injury drag down every player, no matter her natural gifts. The good ones adapt to those obstacles. The best ones turn those hurdles into positives. In 2012, Wambach’s game evolved again, this time thanks to a gift young striker named Alex Morgan who played the Baby Horse to Wambach’s aging colt. It was Hamm-Wambach all over again. As Wambach entered her 30’s, she was beat up and unable to consistently carry the team on her back solely through her uncompromising aggression. Morgan emerged as speedy, if sometimes shaky strike partner in 2011. But she was a quick learner, just like Wambach, and had a breakout 2012, putting up 28 goals and 21 assists. She was the first women to put up those prodigious numbers since, you guessed it, Mia Hamm. Wambach could focus on precision, like the exact spot between her defender and the goal post or the precise moment to send in a ball to a streaking Morgan whose effortless stride burned defenders. Soon, both players were feeding off the other’s gifts, creating an unstoppable strike force. Wambach marched closer and closer to 158, and Morgan sent the message that it wouldn’t be Wambach’s forever. “Thank you for pushing me every day, Alex especially,” Wambach said in her Ballon d’Or acceptance speech. “We’re day in and day out with each other. It’s almost as if, when you score I need to score, and when I score you need to score, and that makes us a better team.” Morgan learned from Wambach and pushed both of their games to another level, not only extending her teammate's career but continuing the lineage of the American goal icon. Michelle Akers, who Mia Hamm once described as “her hero," steamrolled the way for Hamm, who nurtured another bruiser in Wambach, who now has allowed Morgan to emerge with speed and grace. Through that direct line, each player grew and evolved. You won't find a purer line of excellence anywhere in international soccer. And that’s where the magic is, and why Alex Morgan will follow in Hamm and Wambach’s footsteps as a FIFA Women’s Player of the Year. Then, American soccer gods willing, another young talent will emerge when Morgan’s endurance is tested, her long strides slowed and her quick reflexes dulled with time and use. Hopefully it won’t take another decade for that to happen. Maura Gladys, a featured ASN columnist, works in production for KICKTV. She also runs the goalkeeping blog All You Need Is Glove.