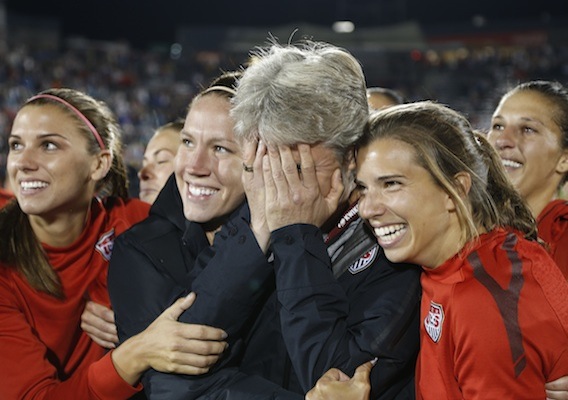 The United States women's coach walks away after one of the most successful tenures of any manager. She reached a World Cup final and won two Olympic golds, but how should we remember the Swedish sensation?
BY Maura Gladys Posted
October 03, 2012
2:00 AM

With a teary sing-along at Dick’s Sporting Goods Park on September 19, the Pia Sundhage era of United States women’s soccer came to an end.

The former Swedish star, who is returning to her native country to manage its national team, transformed the United States squad. She arrived at a dark time, armed with a guitar and a relentless sense of optimism, and helped a stagnant squad evolve.

Sundhage leaves behind a team that just won its second straight gold medal and seems headed in the right direction. Her most important legacy, however, will be Alex Morgan. With 34 goals in 51 matches, including 12 in 24 in 2012, she is already following in the footsteps of Mia Hamm and Abby Wambach as the next great American goal scorer. She appears poised to lead the squad to a World Cup final in 2015.

And all of that can be traced back to the departing coach.

Sundhage provided Morgan a stage to shine, then made her fight for that that stage. The struggle and challenge will benefit the player and the team for years to come.

Morgan made her first appearance for the USWNT on April 30th, 2010, in a snowy friendly against Mexico in Utah. She would play in eight more games that year, most notably coming off the bench to score a key goal against Italy in November. The tally helped ensure the U.S. women had a spot in the 2011 Women’s World Cup.

"That last thing I told her (before she went into the match) was ‘go to goal.’ She had just a couple of minutes, but she’s good at that. She doesn’t think too much, she just goes, which is good,” Sundhage said after the match.

Morgan's speed and willingness to enter a game to spark a fatigued offense helped her develop into a super sub, a role she owned entering the 2011 World Cup.

But as the U.S. progressed in the tournament and Morgan’s talents continued to impress, fans and media clamored to see her start with Wambach, especially as Wambach’s strike partner, Amy Rodriguez, struggled mightily to find her form.

Stubbornly, Sundhage kept using Morgan as a sub, often switching out Wambach and rarely allowing her more than 45 minutes. Sundhage insisted it was because Morgan’s second-half spark off the bench was so valuable. Rodriguez’ role as proven scorer also made it difficult to justify to the move. Entering the World Cup, Rodriguez had more than 60 caps and had enjoyed a breakout year in 2010. Sundhage's decision implied that she believed Rodriguez would find her form. The slump was not enough to hand Morgan the starting spot.

But even as Morgan saw limited minutes, she kept putting in outstanding performances, showcasing her speed and scoring goals. She proved, at least to everyone but her coach, that she deserved a place in the first XI.

After the heartbreaking loss to Japan in the World Cup final, Rodriguez’s form continued to decline. Morgan gained more experience during friendlies and the Olympic qualifying tournament in January. Sundhage was tinkering with a new formation and trying out different personnel all around the field. In these matches, Morgan proved she could hang, and more importantly, proved she was not just a valuable goal scorer but an all-around playmaker.

By the start of the 2012 Olympics, Sundhage had cleared a spot for Morgan up top next to Wambach. Morgan did not squander the opportunity. She scored key goals, including the game-winner against Canada, provided four assists, including one in the gold medal game, demonstrated her improved decision-making, and consistently created opportunities for herself and her teammates.

Alex Morgan transitioned from a fast striker who could score into a complete player, a metamorphosis that could not have happened as fully or as beautifully as it did had Sundhage not forced, or rather, nudged Morgan to grow and earn her spot on the field. The striker always possessed the vision, the speed, the ability to position herself but Sundhage—eventually—gave her young striker the opportunity to showcase those skills.

“Pia believed in me from day one. She gave me my first cap and helped me grow on this team and take baby steps to be the player that I’ve become. She never pushed me along into a different position or forced me to do anything," Morgan told USSoccer.com after her coach's final match. "It was always letting my play on the field how I wanted to play and her guiding me a little bit here and there.

Sundhage’s handling of Morgan was indicative of how she coached her during her entire tenure. At her worst, she was someone who pinned outcomes of major games on emotions. She trusted her gut feeling when selecting a lineup and that hurt the team at points. But at her best, she was a visionary coach who understood the individual players and the larger team better than they could understand it themselves. She pulled the precise strings to push the team to greatness.

During the 2011 World Cup, Sundhage only started the same 11 players twice, and often shifted women to different positions midway through each game. Her troops consistently responded positively to each change. Sundhage set up a system where players were constantly being challenged to excel, and they did. Sundhage seemed to have a magic touch.

For example, she surprised pundits by starting Lori Lindsey over Shannon Boxx against Colombia, which worked well. Then, instead of sticking with Lindsey, she went back to Boxx in the next match. Every substitution she made made sense only to her, but were brilliant in hindsight.

There are additional layers to Pia’s influence as well.

She added another aspect of tactical, possession-oriented skills to the USWNT’s game, keeping them a step ahead of a world that is rapidly catching up with their athleticism and technical proficiency.

Finally, she left some magic for the next coach. At the heart of the U.S.'s best games during her tenure—the phenomenal comeback against Brazil in 2011, the battle of wills with Canada in London—was a fierce sense of optimism and belief. Only Pia Sundhage could have instilled that quality, one that will stay with this team for the foreseeable future.

After the farewell victory over Australia, Sundhage spoke about the squad's never-say-die attitude. “We’ve come back so many times in many games since 2008 and it is contagious. I've got a little bit of that winning attitude," she said. "I’m very grateful for everything they’ve done for me and I think I’m a much better coach today than I was five years ago."

The U.S. team and fans are grateful for what Sundhage did for them as well. And then, of course, there's rise of Alex Morgan. She's not going anywhere.