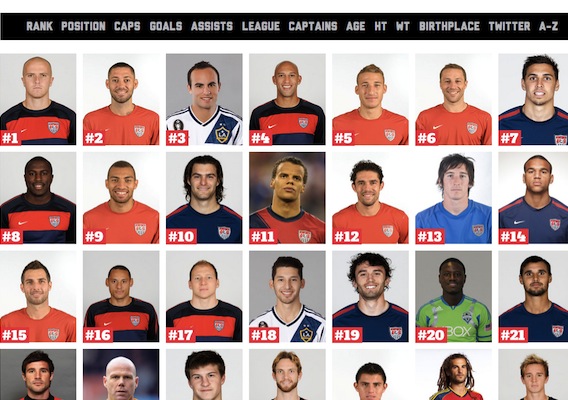 The January ASN 100 Is Now Alive and Kicking

American Soccer Now's first player ranking of 2013 is now ready for your perusal. Who moved up? Who moved down? And who has more Twitter followers—Geoff Cameron or Graham Zusi? It's all there for you.
BY John Godfrey Posted
January 03, 2013
6:03 AM
When we dreamed up the ASN 100 few months back, we kept three primary considerations in mind. 1. It must be a collective ranking
Nobody cares about my personal preferences among the top 100 U.S. players—why the hell would you?—but if we could gather lists from a diverse collection of soccer analysts, writers, and former U.S. national team players, it would give the ASN 100 the sort of perspective that would lend credibility. With folks like Grant Wahl, Alexi Lalas, Kyle Martino, Brian Sciaretta, and the Best Soccer Show guys on our panel, we think we’ve checked this box. 2. It must be interactive
Anybody with a ballpoint and a legal pad can scrawl out a list, but if we could find a way to allow users to play with the ASN 100, tweak it to serve their purposes, and reassemble it on the fly, perhaps then we would be onto something special. Even though it nearly killed a few of us, we think the HTML5-optimized filters atop the ASN 100 are just the sort of thing that can help obsessive soccer fans kill a few hours when the boss isn’t around. If you haven’t toyed around with these filters, you really should. You can rank the American player pool by height, weight, age, number of caps, goals, assists—even the number of Twitter followers they have. All told, there are 13 different tabs and each one offers unique insights into the makeup of the squad. 3. It must be current
Relevance has an expiration date, so we post a new ASN 100 ranking on the first of every month. It’s a pain in the ass, I assure you—especially for someone who hates Excel as much as I do—but players’ stock rises and falls from month to month (and game to game), so our panelists update their rankings based on the most recent performances for both club and country. You can still refer back to previous lists—just click on the “Rank” sub-navigation for a drop-down menu of choices—but since the word “Now” is right there in our company logo, we figured we had better keep the information as fresh as possible. And now that we have four separate ASN 100 rankings completed, some interesting patterns have started to emerge. For one thing, there isn’t much movement at the top of the list. Yes, Michael Bradley has supplanted Clint Dempsey as our No. 1-ranked player. And sure, there have been subtle positioning shifts for Landon Donovan, Tim Howard, Fabian Johnson, and others. But nine of the top 10 players from our first list are still in the uppermost decile; only Carlos Bocanegra, who dropped to 15th, has fallen out. Things are much more volatile at the other end of the ASN 100. Players fall out, rise back up, and move around constantly. Why did Columbus Crew goalkeeper Andy Gruenebaum make the list, fall off it, and then rise back up this month? Hard to say. (But we're glad to have you back, Andy!) Some players are clearly on the rise: Graham Zusi, Sacha Kljestan, and Eddie Johnson have all climbed steadily since we posted the inaugural ASN 100. Others are moving in the opposite direction: Maurice Edu, Jose Torres, and Tim Ream are facing various struggles, and their rankings reflect that. Next up for the ASN 100: Once we have enough data in hand, we will start to graphically display players’ movement within the list—much in the same way Wall Street graphs stock price fluctuations. Keep an eye out for that. It should be fun. Don't agree with a ranking? We expect that, and we'd love to hear your take. Click here, take a look, and be sure to leave your thoughts in the Comments section.