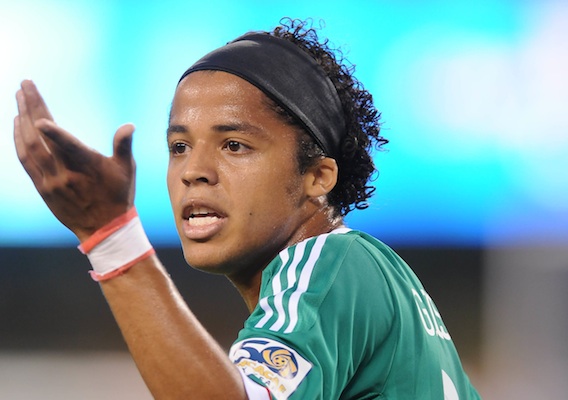 The Mexican forward earns two more assists in Mallorca's victory, while netminder Guillermo Ochoa has another strong performance. Meanwhile, Bryan Ruiz goes 90 for Fulham.
BY Jon Arnold Posted
March 05, 2013
11:00 AM
The five national teams the U.S. faces during the Hexagonal round of World Cup qualifying include players who play outside CONCACAF. You know how the Americans fared abroad each week, but what about the players they’ll be facing? We’ll keep you updated on their progress each week. Also, don’t forget to check out our section dedicated to all things Hex. We’ll focus first on the United States’ next Hex opponents:

Bryan Ruiz went 90 minutes for Fulham in a 2-2 draw with Sunderland. Ruiz’s most notable contribution was actually on the defensive end of things, making a close-range block. He also provided several nice balls for Dimitar Berbatov and had a shot of his own blocked. Real Betis drew 3-3 in a fantastic match with Real Sociedad (more on that, including highlights in the Mexico section). Joel Campbell started for Betis and went 72 minutes. He assisted the opening goal. Again, in case you skip the stuff in parentheses, you can see that in the Mexico section, as a Mexican forward was Man of the Match. The Danish Superliga returned this weekend, and that means we can now track the progress of dangerous attacking midfielder Christian Bolaños who plays for FC Copenhagen. Bolaños went the full 90 for a 3-2 win against OB. He played a great return ball that led to the assist on the winning goal (around the 1:45 mark if you prefer to fast forward). Bryan Oviedo was an unused substitute for Everton in its 3-1 win against Reading. With Gustavo Munúa again available in goal for Levante, keeper Keylor Navas returned to the bench.

Last week, we reviewed how impressive Carlos Vela has been of late. This weekend, he exceeded all expectations put on him, turning in a Man of the Match performance for Real Sociedad in a 3-3 draw with Real Betis. With Sociedad trainings 2-0, Vela scored in the 51st and put in a superb cross that was headed in just five minutes later.
Real Sociedad 3 Betis 3 by acosart Also in Spain, Mallorca was finally able to get a victory and Gio dos Santos had the assist on both goals, including the 90th-minute winner from a corner.
GRANADA 1 MALLORCA 2 by acosart Staying in Spain, Hector Moreno’s Espanyol played to a scoreless draw with Valladolid. An uneventful match for Moreno at center back, though perhaps that speaks to his consistency. And your final La Liga note, Andres Guardado returned to Valencia’s line-up at left back when the team faced Levante. He got a late yellow card in the 2-2 draw. Ajaccio’s losing streak continues, but Guillermo Ochoa can feel happy with his performance. The derby loss to Bastia saw three Ajaccio players sent off, though two of the red cards were shown in a stoppage time dust up that also saw two Bastia players sent off. Chicharito was an unused substitute for Manchester United in its 4-0 victory over Norwich. Javier Aquino got his first start with Villarreal and came out in the 73rd minute with his club leading Córdoba, 2-0. Remember the guy who made the way-too-dramatic video of Aquino entering a Villarreal match two weeks ago? Oh yeah. He’s back.

Marlon King might be too old for Jamaica, but many fans were hoping he’d return to the team. That hope is gone as King, who has scored 14 goals this year, will miss the rest of the season after having knee surgery. Another week, another tough loss for the Reading trio. Adrian Mariappa, the center back, had a better match than last week. He and midfielder Jobi McAnuff went the full 90 in a 3-1 loss to Everton. Garath McCleary didn’t get into the match. Another 90-minute shift for Nyron Nosworthy on Watford’s back line. The Hornets drew 1-1 with Wolves. Motherwell had a surprising victory against Celtic midweek, but Omar Daley didn’t play a part. He did come on in the 57th minute of the club’s Saturday victory against Hearts. Ricardo Fuller went the full 90 for Charlton in its 1-0 loss to Burnley. Dane Richards wasn’t in the team for Burnley. Marvin Elliott’s Bristol City team scored five last weekend but apparently used up all its goals. Elliott played all of the 0-0 draw against Blackpool. Rodolph Austin hasn’t appeared for Leeds since February 12. Jermaine Johnson came in at halftime for Sheffield Wednesday in its 1-0 loss to Nottingham Forest. (Dexter Blackstock, who you may remember from Antigua and Barbuda’s national team got a yellow card in the first half for Forest.) Theo Robinson wasn’t in the Derby team that lost 1-0 to Crystal Palace.

As we mentioned last week, Román Torres was suspended for Millonarios’ Copa Libertadores match against Corinthians, which the Colombian side lost, 2-0. Torres returned to the team in league play and scored a stoppage time winner. He got the ball in a ton of space and hit in a bouncing shot in from about 25 yards out. Two things besides the Torres goal here: Check out the kits on Boyacá Chicó and check out its goal celebration. Gabriel Gomez missed Junior’s 2-0 loss to Cúcta Deportivo in Colombia because of red card suspension. Armando Cooper, frequently a late sub for Godoy Cruz in Argentina, couldn’t score after coming on in the 78th minute. Argentinos Juniors finished the match with just nine men, but one of Cooper’s teammates, Mauro Obolo hit a penalty straight at the keeper and the match ended scoreless. Yairo Yau has recovered from his illness, but Sydney FC didn’t utilize him this weekend in its 2-1 loss to Perth Glory. After missing last week’s match, Luis Henríquez went the full 90 for Lech Poznan.

There were better days than for Wigan’s Honduran duo of Maynor Figueroa and Roger Espinoza. Liverpool took a lead in the 2nd minute and added three more before the final whistle. Figueroa went the whole match while Espinoza entered in the 52nd minute – with the club already down 4-0. Celtic lost to Motherwell on Wednesday with Emillio Izaguirre playing the whole match at left back. The team got back to its winning ways in the cup Saturday, with Izaguirre again going the full 90 and Celtic winning, 2-1, against St. Mirren. Carlo Costly went 90 minutes and was booked in Veria’s win against Aris (former club of Carlos Ruiz and Juan Toja among other MLS players). The 3-1 victory keeps Aris in the relegation zone and puts Veria four points clear. Also going the full 90 and getting booked since we last met was defender Osmán Chavez whose Wisla Krakow team drew 0-0 with Podbeskidzie. Jorge Claros played the entire match Hibernian both in is midweek draw against Kimarnock and 4-2 win on the weekend over the same team, this time in the cup. Leigh Griffiths had a hat trick for Hibs, and Claros helped him celebrate. Defensive midfielder Luis Garrido went wire to wire in his Serbian league debut with Red Star Belgrade, a 2-1 victory against Javor Ivanjica. He started the team’s Saturday match against Rad Beograd and made way in the 61st minute of a 1-1 draw. Like Geoff Cameron, Wilson Palacios made Tony Pulis’ bench in Stoke’s 1-0 loss to West Ham. Unlike Cameron, Palacios hasn’t seen the pitch for Stoke in months. No Andy Najar sighting for Anderlecht quite yet as he continues to recover from injury. Whose performance strikes the most fear in your heart? Have we missed any players who you think should be in the U.S.’ game tape rotation? Any information you’d like to see in future editions? Let us know in the comments section! Jon Arnold (@ArnoldcommaJon) is a writer based in Arizona and ASN’s CONCACAF correspondent.