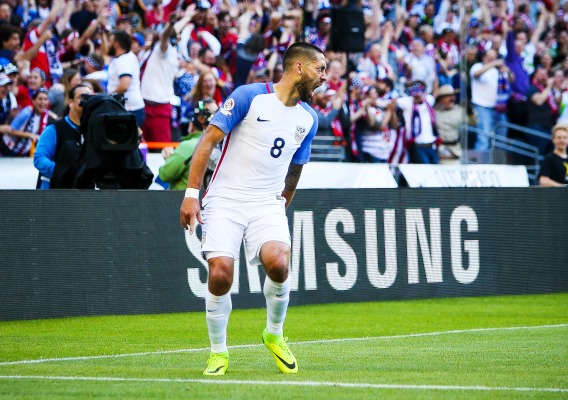 After turning professional in 2004, Clint Dempsey has had a groundbreaking career at both the club and international level that raised the bar high for future generations of American players to reach. ASN's Brian Sciaretta looks back on an amazing legacy he leaves behind.
BY Brian Sciaretta Posted
August 29, 2018
9:05 AM
WEDNESDAY MARKED the end of an important era for American soccer as Clint Dempsey announced that he is retiring from soccer.

While the news was hardly surprising as the iconic U.S. international is now 35 and has been struggling with injuries which left him unable to play for Seattle since July 25, the announcement still hit home like a ton of bricks for all those involved with the sport in the United States.

But for Dempsey, it wasn’t the number of goals but rather the timing of the goals which often came at times when his teams needed them the most.

This was especially true for the U.S. national team. From the dramatic opening goal against Ghana at the 2014 World Cup, to the two dramatic Confederations Cup goals against Egypt and Spain, to the important goals against Costa Rica, Paraguay, and Ecuador – Dempsey so often was there when the U.S team needed him.

Dempsey will be forever linked with his long-time international teammate Landon Donovan who he will finish tied at 57 international goals. For all the pointless comparisons about who was the better player, both were at their best when playing together even though both had strong World Cups apart from each other.

The reasons why such comparisons are futile is that when the two of them were on the field together, the United States national team was at its absolute best.

Comparison often reflect more about whoever is making them than the actual players. They were different but both had incredible moments that were instrumental to the most important moments in the history of the U.S. national team. The Dempsey and Donovan era produced a stretch where the U.S. national team advanced out of group play at the World Cup three out of four times – which is impressive for all but the true elite national teams.

Yes, the U.S. team went its furthest of the modern era in 2002 before Dempsey arrived at the pro game but when Dempsey arrived with Donovan, the team achieved far more success on a regular basis than ever before – winning the Hex three times, winning the 2005 and 2007 Gold Cups, advancing to its first ever FIFA final at the Confederations Cup in 2009, winning its first ever World Cup group in 2010. Dempsey would, of course, go on to win another Gold Cup and help the team advance out of the most difficult group at the 2014 World Cup.

Dempsey and Donovan were so different and that is why they made the U.S. team so tough to beat. Dempsey had incredible ball control, finishing skills, and played with a fearless approach. Donovan was far more reserved than Dempsey as a person and as a player, but had first-rate instincts as to where to be on the field, when and where to make runs, and how to combine with his teammates – which is why he finished with a staggering 56 assists which no American player is even close to.

On the club level, however, Dempsey was groundbreaking. His success with the New England Revolution saw him earn a transfer to Fulham where he quickly became the team’s best offensive player. He was the first American to score a Premier League hat trick and the first to reach 50 goals.


Where it all began. 4/25/04 - Giants Stadium. Clint Dempsey’s first professional goal. In the 11th minute he pounced on this corner kick to beat Jonny Walker & give the Revolution a 1-0 lead on the MetroStars in the 11th minute. It ended a 1-1 draw. (Proud that I was there) pic.twitter.com/ZnMw9VxaBa

Of course, there were other Americans before Dempsey to succeed abroad and even in the Premier League. Brian McBride, Carlos Bocanegra, and Tim Howard all were before him. But for many American fans stateside, Dempsey was the reason why they woke up early on a Saturday morning to tune into a team that had no chance of ever winning the league.

These fans tuned in because Dempsey had a fearless attitude where that made it clear that he was an unapologetically American kid from the middle of Texas and was not intimidated to take his game to English Premier League to earn respect against the best players in the world. If need be, he was going to be the force that galvanized his teams.

While he was such an electrifying player, he leaves the game with a relatively quiet announcement given his stature. Perhaps that is because he doesn’t want to draw too much attention away from the Seattle Sounders which have gone on a torrid seven game winning streak to move surprisingly into playoff contention.

So Dempsey now walks away from the game today after completing a groundbreaking career. The U.S. team is rebuilding now and if there was any justice, Dempsey’s final time in that uniform wouldn’t be on the field in Trinidad during the team’s greatest greatest failure. But that failure does not tarnish his legacy.

Instead Dempsey’s legacy will serve as a useful lesson to the talented generation of American players now trying to pick up the pieces from the broken team. Talent is important but it is nothing without heart. Tons of enormously talented players fail to ever make an impact in the game but players with hearts like Dempsey can become legendary and carry teams to new heights.

Dempsey’s fearlessness as a player raised the bar for American soccer to a new standard that future generations will be measured against – and it will be tough for them to reach it.