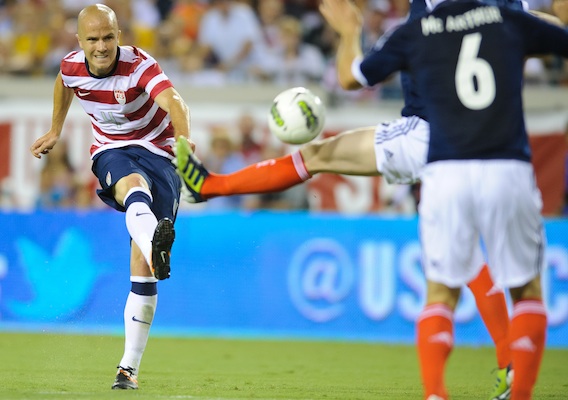 The 10 Best U.S. Goals of This World Cup Cycle

American Soccer Now's Blake Thomsen takes you on a video-filled journey that ranks the best strikes of the quadrennial and ends in the land of the wonder goal.
BY Blake Thomsen Posted
May 22, 2014
11:49 AM
WITH THE 2014 WORLD CUP drawing near, we’ve decided to take a look back at the 10 best goals scored by the U.S. national team since it was ousted in South Africa. A note on our methodology: the importance of each goal is irrelevant. Sports Illustrated is tracking the 10 most important U.S. goals, and you should check that out. We’re evaluating strikes based on sheer quality, taking into consideration both the buildup and the finish. No extra points for game winners or goals against world class opposition or audacious post-goal celebrations. All right, let’s dive in.

OK, so this one requires an asterisk because it was in the U-20 World Cup, but we’re including it anyway due to the technique on display. Luis Gil shifts the ball onto his weaker foot and fires an absolute rocket past the keeper and into the side netting. It was sensational stuff from the youngster, who certainly has a chance to contribute to this list as a full national team member in the very near future.

We’re not here to celebrate the quintessential Chris Wondolowski finish, though he does deserve credit for his customarily sharp movement in the box. Instead, this goal makes the list due to the slick buildup that precedes it. The move starts with Graham Zusi dribbling into a bit of traffic infield. He leaves the ball for Clint Dempsey, who cleverly scoops the ball out of the pressure of three Mexican defenders and neatly into the path of an advancing Tony Beltran. Because Michael Bradley is a cyborg and reads the game exceptionally well, he makes a blazing run into open space in the near-post area. Beltran duly finds him with a first-time cross, and Bradley flicks it into the danger zone at the far post, where Wondo does his thing and slides it in. It may have the fewest noteworthy touches of any goal on the list, but it deserves plaudits for being so efficient and clinical.

Much like the previous goal, the finishing touch here isn’t anything special, as Jozy Altidore taps into an effectively empty net. The buildup, however, is similarly efficient, and perhaps slightly more impressive for a couple of reasons. Though the video doesn’t show it, the move starts with a strong challenge from Geoff Cameron, who then quickly moves the ball to Bradley. Again, we see the spatially aware Bradley charge into open field, this time with the ball at his feet, carrying it until the last-possible moment. It’s a wonderful run, and a nice example of the quality that Bradley will need to show if the Americans are to advance in Brazil. The highlight of the goal, though, comes from Fabian Johnson. Deployed as a left midfielder in this match, Johnson sees the counterattack developing and embarks on an absolute lung buster to make himself available. Bradley spots the run and slides a nicely weighted ball into his path. Johnson’s only option is to cross the ball while running at his very highest speed, and he needs to get it just right, slightly in front of the keeper but also beyond the reach of the retreating defenders. He does exactly that, with his weaker foot no less, and thus leaves Altidore with the simple task of tapping it in and sending Seattle into raptures.

In contrast to the two previous goals on the list, this Joe Corona curler benefits from no buildup whatsoever. Stuart Holden loses possession near the top of the box, and before anyone in a Cuban shirt can react, Corona pounces and rips an unstoppable first-time shot into the side netting. It’s this kind of ingenuity in the final third that has landed Corona on the provisional roster for the World Cup, and a moment or two like this in one of the pre-Brazil friendlies could book him a plane ticket.

Jermaine Jones may technically pick up an assist here, but this one is all Dempsey. Receiving the ball in a seemingly non-threatening position, Dempsey quickly sizes up Lukas Podolski and realizes he may be able to create some space. Granted, it’s not the strongest defensive effort from Podolski, but that doesn’t take anything away from Dempsey’s left-footed curler into the top corner. The shot comfortably beats Barcelona’s Marc-Andre ter Stegen, capping a landmark day for Dempsey and the U.S. squad as it defeats one of the world powers of soccer.

In some ways, this goal felt like the coronation of Bradley as the U.S.’s best player. Fittingly, he actually passed Clint Dempsey and moved into the top spot on the ASN 100 for good following this game. With the Americans needing late inspiration, Bradley delivered this stunning volley—significant both for its quality and for how unlikely it was given the run of play at the time—to equalize on a cold night in Russia. Credit is warranted for Maurice Edu and Juan Agudelo, too, who combined well to present Bradley with what could at best be described as a half chance.

Given the confidence with which it was taken, it’s hard to believe that this sensational volley against Germany was Jozy Altidore’s first U.S. goal from open play in around 18 months. The move starts with some solid running from CDempsey, who carries the ball for 40 or so yards and commits Marcell Jansen before laying the ball off for Zusi. The Sporting KC man wastes no time in playing a gorgeous cross towards the middle of the box, where Altidore has taken up a great position in between Per Mertesacker and Lars Bender. The cross is perhaps six inches or so too high to be truly ideal, so Altidore smartly takes a hop step back before firing the ball past a helpless keeper. It’s a three-player combination that could very well start in the World Cup, and U.S. fans would love nothing more than to see the trio link up again in a similar way in Brazil.

Altidore makes his third appearance on the list with this absolute screamer against Guadeloupe. Goals like this are generally reserved for global stars with some of the hardest shots in soccer—recent efforts from Cristiano Ronaldo and Zlatan Ibrahimovic come to mind. But this strike from Altidore is right there with them. Perhaps the most impressive part is that he doesn’t even seem to fully get his momentum behind the shot, yet he still manages to rocket a shot with astonishing power into the top corner.

This one is all about the team play. Note the intricacy of the passing, as well as the brilliant movement from Donovan. First it's Jones who intercepts a Mexican clearance, and his pass to Donovan’s feet begins a sweeping, devastating 10-second sequence in which six passes are played and no player takes more than two touches, including the goal scorer. Donovan plays Eric Lichaj, who finds Alejandro Bedoya, who first times it to Freddy Adu (!), who finds Dempsey, who then picks out a brilliant pass that meets a racing Donovan in stride. Dempsey’s vision to spot Donovan’s perfect bending run and the deftness of his pass is absolutely sublime. Donovan still has plenty to do when he receives it, but he makes it look incredibly easy, taking an excellent first touch before slamming home with his weaker foot. The reaction from Andres Cantor says it all, as he can’t help but celebrate with an emphatic “golazo!” call, even though it put Mexico down 2-0 in the Gold Cup final. It's the type of goal that Jurgen Klinsmann dreams of despite the fact that it came in Bob Bradley's last game in charge.

Amid plenty of superb U.S. goals over the past four years, this Bradley effort is the clear winner. Donovan picks out a clever ball for Jones, who plays a somewhat clunky ball toward Bradley. No matter, though, as Bradley sorts his feet out to send an outrageously well-hit shot from almost 30 yards into the top corner. Bradley’s speed of thought is incredible, as he has to react to the bouncing pass from Jones, decide he's going to shoot, and then adjust his technique accordingly to hit it on the half volley. It's a wonder goal in the truest sense, and one of the technically finest goals ever scored by a player wearing the Stars and Stripes. The overjoyed reaction from Klinsmann says it all. OK, that's our list—now we need to hear from you. Did we leave out one of your favorites? Did we mess up the order? Tell us what you think in the Comments section below. Blake Thomsen is a frequent ASN contributor. Follow him on Twitter.