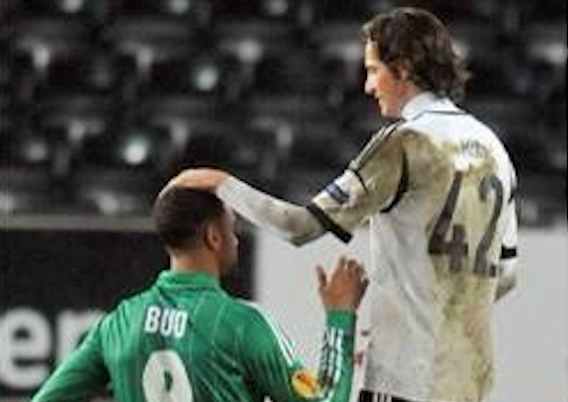 The young duo does its thing in Europe, while Herculez Gomez goes to Denny's and hangs with Mariah Carey, and Robbie Rogers battles a gang of oompa loompas in Newcastle.
BY Jesse Yomtov Posted
December 15, 2012
6:29 AM
10) Eddie Johnson- All the way?

Orlando what's good tonight? Ya boy in town and I'm all the way turnt up!!!!

That 10 minute break u take when youre eating sushi and u know youre about to head down the home stretch w/ that last roll... #happeningnow

8) Maurice Edu- The perils of the English Premier League:

Hate filling out forms and paperwork!????

7) Brek Shea- He wound up finding the keys on a “low hanger”:

I have been walking through a store for 30 min trying to figure out where my keys fell out of my pocket.... #hah

Big shout out to my lil bro@darlingtonnagbe . Had a great bachelor party last night. Akron boys were in full force. #NagbeWedding #811

4) Robbie Rogers- Can’t you hook us up with some context?

Attacked by a school of oompa loompas last night in Newcastle.

So thankful that the "comic book guy" from the Simpsons is our genius bar tech at the Apple store. #fixedyfrog.com/ob4m0ooxj

2) Jermaine Jones- His reputation precedes him: