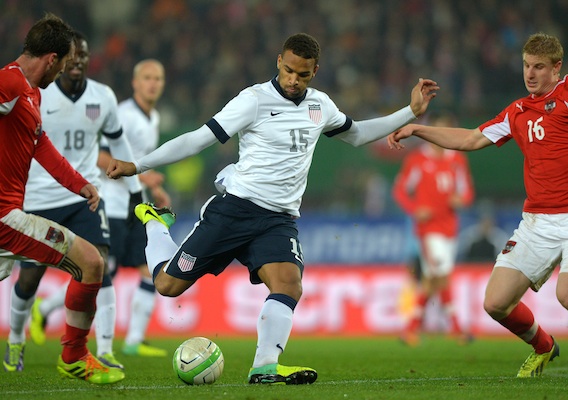 Josh Deaver's weekly report on top American talent features some encouraging news from Europe, some discouragement from Los Angeles, and tons of analysis, stats, and videos.
BY Josh Deaver Posted
December 03, 2013
8:46 AM
Michael Bradley—ASN rank #1
Bradley returned to the Roma lineup on Sunday, registering his third 90-minute performance of the season in a 1-1 draw with Atalanta. After conceding in the 51st minute, the Wolves trailed nearly the entire second half, failing to convert on a number of chances, including a close-range Bradley header that was waived offside by the line judge. A 90th-minute equalizer off the foot of Kevin Strootman would eventually snatch the points from the jaws of defeat. With a fourth consecutive draw, Roma remain unbeaten in Serie A play, but have slipped to second in the league table, three points off the pace of defending Champions Juventus. Landon Donovan—ASN rank #3
Los Angeles Galaxy head coach Bruce Arena put his foot down this week, saying Landon Donovan and Omar Gonzalez would not go out on loan in the MLS offseason, thereby freeing them up for U.S. national team camp in January. The Galaxy boss was resolute in his claim, but Donovan’s recently resurrected twitter account seemed to be teasing an upcoming move …or not. On Monday, the all-time American goal scorer tweeted, “I love winters in Europe with good food, good people and good reading.” This will no doubt fuel at least a few weeks of silly season speculation. Tim Howard—ASN rank #5
Bearded but dapper, Tim Howard has been all over the airwaves in the past week; presumably getting a head start—along with Landon Donovan—on making a transition into broadcasting. While he may be a newbie behind the mic, between the pipes there is no question that the Bearded One still has it. Yes, it was only Stoke City, but Howard’s clean sheet against the Potters moves him into a three-way tie for most EPL shutouts this season with seven. The 4-0 win also extended Howard’s remarkable 16-game unbeaten streak home at Goodison Park. Jermaine Jones—ASN rank #9
How quickly we forget: "Guys, I am Champions League player." Receiving the start for Schalke on Saturday, Jones put in a 90-minute shift in midfield, scoring his first goal of the season in a 3-0 win over Stuttgart. Receiving the ball at the top of the 18-yard box, Jones made a wonderful slashing effort on a half-volley, finding the back of the net in the 79th minute and securing the points for Schalke, who move to fifth in the German table. It’s been a busy week for the club, which stumbled through a listless and scoreless draw with Steaua Bucharest in Champions League action on Tuesday. On Tuesday Schalke will take on Hoffenheim in the quarterfinals of the DfB Pokal Cup. Terrence Boyd—ASN rank #20
Boyd celebrated Turkey Day is grand style on Thursday, scoring his 11th goal of the year for Rapid Vienna in its 2-1 Europa League win against FC Thun. The 22-year-old opened the scoring in the 17th minute with a goalmouth tap-in—his fourth of the Europa League campaign—to help secure a vital three points for the Austrian side and keep the club’s European dream alive. Currently sitting in third place in Group G, if the Green-Whites can secure a win against Dynamo Kiev in its final match next week it will earn passage to the Round of 32. Boyd was given a well-deserved rest in weekend domestic action, sitting out a 3-0 win over Wacker Innsbruck. Steve Cherundolo—ASN rank #31
In his first competitive minutes since May, the Mayor of Hannover made his return to action on Saturday, entering as a stoppage-time substitute in Die Roten’s 2-0 win over Eintracht Frankfurt. The capacity crowd at HDI Arena in Hannover roared its approval at the late change, which saw Cherundolo—in his 16th consecutive campaign with the club—make his long-awaited return off three consecutive knee surgeries. The win snapped an eight-game winless run for the club, which now sits dead center in the Bundesliga table. You can read about Cherundolo’s remarkable career in an ESPN piece posted this week. Danny Williams—ASN rank #37
Williams' full return to Reading FC paid immediate dividends on Friday, with the young German American playing 90 minutes and having a hand in two goals during the Royals’ 3-2 win over Nottingham Forest. In his first 90-minute performance since September, Williams appeared fully recovered from a troubling foot injury that has left the midfielder indisposed of late. The vital three points allowed Reading to leapfrog Forest into sixth place in the Championship table before taking on Charlton Athletic on Tuesday. Eric Lichaj started and played 90 minutes for Forest in the loss. Brek Shea—ASN rank #40
One week removed from making his first-team roster debut, Shea saw his first Premier League action on Saturday, playing 31 minutes in a 4-0 loss to Everton. It was a long time coming, but Shea failed to make any real impact during his shift. In fact, he looked beyond rusty and seemed out of his depth. Despite being dominated by Everton, the 23-year-old had a chance to make the highlight reels for the Potters, but botched a sure-fire sitter in the 66th minute. Compatriot Geoff Cameron put in his usual strong effort for Stoke in the loss. Andrew Wooten—ASN rank #95
Playing for Kaiserslautern II in the German Regionalliga, the former U-23 forward picked up his second goal of the season on Saturday, scoring the opening salvo, a third-minute strike, in a 6-0 drubbing of Hessen Kassell. You can view highlights here beginning at the 6:30 mark. After a successful loan spell last year to 2.Bundesliga club Sandhausen, Wooten still hasn’t made the first-team impact that many tabbed him for at the start of the season. He has not featured for the FCK first team since mid-September. QUICK HITS: