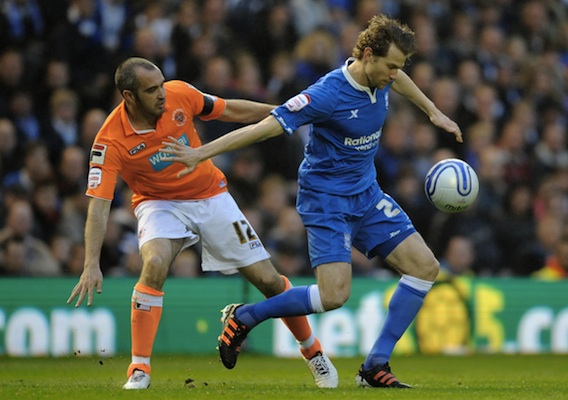 Birmingham City defender Jonathan Spector is on the verge of returning to action, and forward Andrew Wooten is making noise at his new club, FSV Frankfurt.
BY Josh Deaver Posted
February 11, 2014
11:32 AM
Michael Bradley—ASN rank #1
Set your Tivos, or whatever they’re called in Canada. According to a press release from MLS offices on Monday, Michael Bradley’s debut match for Toronto FC on March 15 against Clint Dempsey and the Seattle Sounders will now (and rightly) be shown live on NBCSN. The once-torpid fixture—as most things with Toronto have traditionally been—is now most definitely a marquee matchup for the league, featuring three of its newest high-profile acquisitions. While I’m not sure you can expect a sterling on-field product, the atmosphere will be rocking. And I’ll say this: good or bad, you can look forward to several thousand pieces of hand-wringing analysis to follow. Clint Dempsey—ASN rank #5
Clint Dempsey is not looking great, you guys. ASN’s Samuel Mintz recently spoke with the Fulham faithful about Dempsey’s waning form and found an ample dose of British cynicism. “Well, put it this way”, said one fan. “Most of the other players we’ve got to use are even worse than he is.” Yikes. Watching Fulham’s midweek FA Cup replay with Sheffield United, it’s hard to disagree. Dempsey went 120 minutes in the boring, awful, plodding, and totally listless 1-0 loss which saw the Whites ousted by the plucky League One side. After a long shift, the 31-year-old Dempsey was not included on the roster for this weekend’s improbable (or completely probable) 2-2 draw with Manchester United. Despite the point, Fulham remains at the bottom of the EPL table with only two matches remaining on Dempsey’s loan spell. Fabian Johnson—ASN rank #7
A report from ASN’s Brain Sciaretta last week confirmed the long-whispered rumors that the 26-year-old will indeed leave Hoffenheim at season’s end. Now, Kicker magazine is reporting that Johnson will “no doubt” sign with Borussia Monchegladbach in the summer, the club that has been heavily linked to the left back for several months. A move during the latest transfer window fell through, with Johnson choosing to see out the campaign with his current club. If reports are accurate, it’s a very nice move up the Bundesliga table, one which provides a real opportunity for European competition next season. (Jurgen Klinsmann approves, we can only imagine.) In the meantime, Johnson—recently declared match fit after suffering a broken hand—watched from the bench this weekend during a 1-1 draw with Freiburg. He will look to make his return against former club Wolfsburg in German Cup action on Wednesday. Jermaine Jones—ASN rank #10
The first episode of Jermaine Jones’ Turkish Adventure will have to wait. It was revealed this week that the recently signed 31-year-old picked up a minor groin injury during a training session and will be held out for two weeks as a precaution. Jones is just another in a long line of the American walking wounded this week. Keep reading…

Sacha Kljestan—ASN rank #13
Sacha Kljestan was once again out of the Anderlecht starting XI this weekend and watched from the substitute’s bench during a 2-2 draw with Kortrijk. Now fully recovered from a lingering calf injury, Kljestan has unfortunately lost his place for the Belgian superclub—playing only 45 minutes in the team’s last nine matches. Kljestan needs to win back his spot if he hopes to be in the running for a ticket to Brazil. With Danny Williams gaining steam at Reading and the possibility of a zero-hour return from Stuart Holden, Klijestan has some stiff competition. At least with all the injuries, we can almost guarantee he will be in attendance during next month’s friendly matchup against Ukraine. Timothy Chandler—ASN rank #26
It was a cruel twist of fate this weekend for the 23-year-old Nurnberg defender. Seemingly on the brink of earning his long-delayed return to the U.S. national team, Chandler collapsed on the field in the 10th minute of his club’s 2-0 loss to Bayern Munich on Saturday. Going down untouched, you could tell right away it was not a minor knock. Chandler—clutching his left knee and sobbing—was eventually stretchered off the field, potentially leaving behind his chance to play in the World Cup as well. The prognosis: a meniscus tear that will require 8-10 weeks out of action. A standard recovery would put him back on the pitch in late March. Juan Agudelo—ASN rank #34
There is much discussion when trying to quantify what Eredivisie goals really mean in comparison to other European leagues but, screw that, did you see this strike? It was pretty sweet. Agudelo added to his accolades this week, netting his first-ever European goal for FC Utrecht in a 2-1 loss to PEC Zwolle on Thursday. In the 24th minute, after corralling a deflection, the 21-year-old turned between two defenders and rippled the net with a poised right-footed blast. Back in the lineup over the weekend, Agudelo put in another solid 90-minute shift in a 5-2 loss to Waalwijk. A constant pest on the wing, his confidence appears sky high at the moment. One particular sequence saw an on-rushing Agudelo nearly convert on a fantastic crane-kick half volley that would’ve made Ralph Macchio blush. In other news: Utrecht is winless in eight straight league matches, and badly needs a result when it takes on AZ on Saturday.
Juan Agudelo by goalsandmore Jonathan Spector—ASN rank #51
Out since October with a persistent thigh injury, Jonathan Spector is finally set to make his return to Birmingham City in the English Championship. Speaking on Saturday manager Lee Clark has reportedly organized a test match for Spector on Wednesday with the hope that the 27-year-old will feature next Tuesday against Watford or, at the latest, next weekend against Huddersfield Town. The return couldn’t come at a better time for Spector. In the wake of several injuries to the U.S. backline and an upcoming friendly on European soil, Spector, incredibly, has a fairly good chance of receiving an invite. On the weekend, the Blues picked up a 2-0 win over Charlton Athletic. Fellow American international Will Packwood got the start and played 90 minutes in the win. Stuart Holden—ASN rank #54
Regardless if he is able to make his return to the pitch in the next few months, Stuart Holden will reportedly remain in Bolton after his contract is up in the summer. The deal was announced over the weekend by manager Dougie Freedman, who remains hesitant to put any undue pressure on Holden to return before season’s end. While Holden has made it clear he expects to be playing in first-team matches by April, Freedman is less committal. “We all want him back and we are all frustrated,” he said. “But you won't see me making a call which puts the rest of Stuart's career for the next seven or eight years in jeopardy because we need him tomorrow.” Oguchi Onyewu—ASN rank #75
Onyewu’s stoppage-time exit from a match against Barnsley went largely unnoticed at the time, but has since delivered a frustrating diagnosis for the 31-year-old defender. Reportedly suffering a calf-muscle tear, Onyewu could miss “weeks” after establishing a good rhythm for new club Sheffield Wednesday. The perpetually injured Onyewu has played in just 13 competitive club matches since leaving Sporting CP in 2012. Andrew Wooten—ASN rank #94
Let’s end this especially morose edition of the ASN 100 update with some positive news: Andrew Wooten is killing it. Since transferring to FSV Frankfurt during the transfer window, the former under-23 striker has been on an absolute tear, picking up five goals in six appearances during the club’s winter break. Making his official debut on Saturday, Wooten entered as a substitute in the 67th minute, finding the back of the net on his very first touch (~8:55 on the video) to propel FSV to a 2-1 win against Bochum. The win pushes the club out of the relegation zone ahead of a vital fixture against fellow bottom-dwellers Dynamo Dresden on Saturday. ASN Contributing Editor Josh Deaver is a former academic turned soccer obsessive. Follow him on Twitter already.