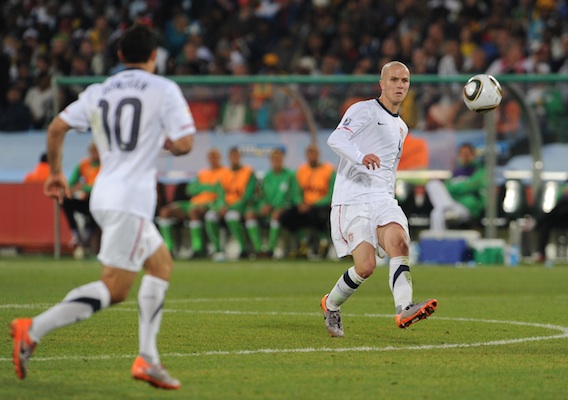 Just for kicks, we decided to look at the top soccer attributes within the U.S. national team—say, Michael Bradley's passing acumen—and compare them to the best in the world. Take a look.
BY Blake Thomsen Posted
May 01, 2014
12:37 PM
CRISTIANO RONALDO. LIONEL MESSI. Luis Suarez. Andres Iniesta. Yaya Toure. Thiago Silva. These are some of the best players on the planet—“world class” players you might say. What makes these athletes better than the rest—and what differentiates them from their American counterparts—is their world class soccer attributes. Ronaldo and Messi have game-changing speed, dribbling, and finishing. Iniesta and Suarez are perhaps the world’s two best dribblers, and Suarez also possesses elite finishing while Iniesta offers incredible vision and passing in the final third. Toure and Silva are more renowned for their physical attributes such as speed, strength, and stamina, but they also have exceptional ability on the ball for their respective positions. The U.S. national team simply does not have any players of the caliber of Messi, Ronaldo, or Silva. But that doesn’t mean that there aren’t plenty of world class attributes floating around the U.S. national team. Several American players do one thing almost as well as just about any other player in the world. Let’s take a look at some of those players and their one truly exceptional skill, assigning a rating to each one.

Many feel that the Yanks will only go as far in Brazil as Michael Bradley will take them. Among many excellent qualities, it is Bradley’s passing that stands out above all the rest. At Roma, he excelled by maintaining possession at all costs, often registering pass completion percentages in the mid to high 90s in individual matches. His 87.8% completion rate for the season left him third among all Serie A midfielders in the 2012-13 campaign. For Toronto FC and the U.S., Bradley has shown the more dynamic side of his passing game, picking up assists and facilitating goals with a wide range of passes. Against Bosnia in August, Bradley showcased his full range of passing qualities. Rating: 7.5 Andrea Pirlos out of 10: 7.5 out of 10 may seem a bit harsh, but Bradley is facing steep competition for truly world-class status in this category. Bradley can’t quite compete with the likes of Pirlo, Xavi, Iniesta, or Joao Moutinho as a passer, but that’s nothing to be ashamed of given the quality of those players. It’s also worth noting that Bradley could probably score around a 6.5 to 7 in several categories—it is this diversity of skills that makes him the best American player.

At his peak, Landon Donovan was capable of scoring outrageous goals on the counter, using a combination of pace, decision making, and cool finishing to tear defenses apart within seconds. His all-timer against Brazil in the 2009 Confederations Cup final displays all of these qualities nicely, as he receives an outlet pass in his own half and scores less than seven seconds later. Donovan has lost some of that electric pace, but even at age 32 he’s still a force to be reckoned with on the counter. His intelligence and vision to play passes (combined with still-serviceable speed) make him an elite counterattacking player even now. He makes this pass to free Brek Shea for a winner in the Gold Cup look easy. It’s anything but easy, though, as Donovan uses a sixth sense to know where Shea is and then plays a sublime first-time ball straight into his path. The U.S. could use more of the same in Brazil. Rating: 8 Ronaldos out of 10: If the year were anywhere from, say, 2004-2011, Donovan might score a legitimate 10 out of 10 here. His slight dip in pace and stamina sees him only garner 8 out of a possible 10 Ronaldos.

Graham Zusi’s rise from second round MLS draft pick to prospective national team starter has been astonishing, and much of it has been built around his sweet, sweet right foot. While most wide midfielders seem to merely try to get their crosses into a general area, Zusi is in the business of picking out individual heads (or feet) with laser-guided crosses that are often impossible to defend. He’s just as good from set pieces, and the quality of his passing helped him pick up 15 assists in the 2012 MLS season. Building off of his sterling 2012 campaign, Zusi led MLS in completed crosses as well as chances created from set pieces in 2013. He’s brought similar success to the national team, too, striking a famous connection with Jozy Altidore which helped the forward end his lengthy U.S. goal drought last June. This one-touch beauty set up Altidore’s first goal of the summer. Rating: 8 Angel di Marias out of 10: Zusi’s crossing is the skill that separates him from his competitors for the starting right midfield position. It’s a brilliant asset and one that could see him earn major minutes (and make a huge impact) in Brazil this summer.

Eddie Johnson has his detractors, but for the purpose of this article, we’re not concerned with what kind of teammate he is or what his work ethic is like. It’s all about his world class skill—leaping and heading crosses into the back of the net. Johnson’s ability to score from crosses (especially corners) may be enough by itself to get him on the plane to Brazil. It’s hardly surprising that five of his last eight goals for the U.S. have been scored with his head. Johnson broke Mexico’s shutout bid in September with this bullet header, after nearly scoring in the first half as well. Most U.S. fans don’t want to see 90 minutes of Johnson on the pitch in Brazil. But a late substitute appearance when the U.S. needs a goal? Or even literally subbing him on for a late corner? Now that’s tempting. Rating: 8.5 Zlatans out of 10: Johnson is one of the world’s best at scoring off of corners, but he needs to deliver a little more frequently off of open play crosses to rise higher in this rating. Perhaps his movement from open play is not quite up to par with his prodigious leaping ability. Still, as mentioned before, he can be a legitimate game changer on the strength of his threat from corners alone.


Clint Dempsey: Finishing in the Box

With his dominant start to the MLS season, Clint Dempsey has delivered a loud reminder of his quality. Along with the tricky dribbling and clever flicks that have come back in full force, Deuce has also brought back his trademark skill—finishing in the box. Late 2013 goal drought aside, Dempsey has always had an incredible knack for scoring goals in the penalty area, from simple tap-ins to spectacular volleys. Like all elite goal scorers, Dempsey has a knack for always being in the right place at the right time. Combine that with above average athleticism, smooth dribbling, and excellent finishing ability, and you have the recipe for one of the U.S.’s best-ever goal scorers. Rating: 8.5 Falcaos out of 10: Like Bradley in the passing category, Dempsey is surrounded by elite players in his quest for world-class status in finishing in the box. He’s not Falcao, Messi, or Sergio Aguero, but he’s not too far off, and that’s what led him to a 23-goal season in England as well as eight goals in his first six MLS games.

At 35, Tim Howard has lost some of the athleticism that once made him one of the five or so best keepers in the world. But his reflexes haven't dropped one bit. Few goalies can keep their team in matches like Howard can, and his incredible reflexes are the main reason why. U.S. fans have seen this quality time and time again, with the recent friendly against Ukraine a particularly good example. Even when critics (this writer included) jumped on Howard for some poor performances last spring, Jurgen Klinsmann held firm, saying at the time about the goalkeeping competition: “Tim is No. 1, undoubtedly.” His world class reflexes surely played a big part in Klinsmann’s confidence. Rating: 9 Manuel Neuers out of 10: There aren’t many in the world with better reflexes than Howard—we may be selling him short even with a 9 out of 10 rating. Given the quality of the U.S.’s Group G opponents, his reaction saves may be the difference between making the knockout stage and going home after three matches.
SO TIM HOWARD takes home our crown for the national team player with the most world class soccer attribute. Let us know how you feel about that as well as the rest of this highly unscientific piece. We tried something a bit different here hoping to start a conversation. Blake Thomsen is a frequent ASN contributor. He likes to think he was a world-class dribbler at the U-10 level. Follow him on Twitter.