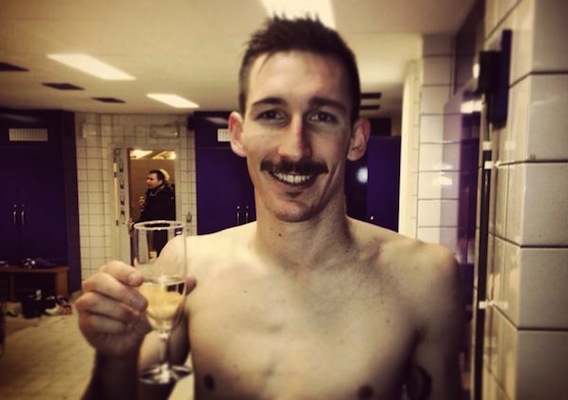 The Anderlecht midfielder drinks a well-earned glass of bubbly after a successful year; Brek Shea asks for a gift; Eddie Johnson is hanging with Lil Wayne and Drake.
BY Jesse Yomtov Posted
December 29, 2012
11:45 AM
10) DaMarcus Beasley—What a good dude:

Nothing worse then trying to end a conversation with someone who's breath is worse than a fart! #BrushYoTeeth

8) Zarek Valentin—Even more so than the rest of the year:

Being single around the holidays sure does save money!

7) Brek Shea—Footy pajamas are the best:

I just saw a infomercial for a " forever lazy" I want one so bad!

I honestly would enjoy playing in the rain like this every weekend... #LondonNights

5) Maurice Edu—Calling out your bro for brownnosing U.S. fans is a bold move:

@tboyd91 I'm confused here bro. Is Christmas only in America?

4) Dax McCarty—Dax had an unusually quiet week on Twitter but snuck this gem in just before the deadline:

Made a friend while wine tasting in Napa... #bahhhh twitter.com/DaxMcCarty11/s…

No ones packing christmas gifts worse than me twitter.com/TBoyd91/status…

Champagne toast in the locker room after the game tonight to celebrate our first half of season and 10 wins in a row. twitter.com/SachaKljestan/…

1) Eddie Johnson—EJ hanging out at the club with Lil Wayne and Drake is too much to comprehend:

Met @liltunechi and @drake in LIV lastnight. S/O to the homies for showing love and for supporting the game I love so much"SOCCER" #Salute