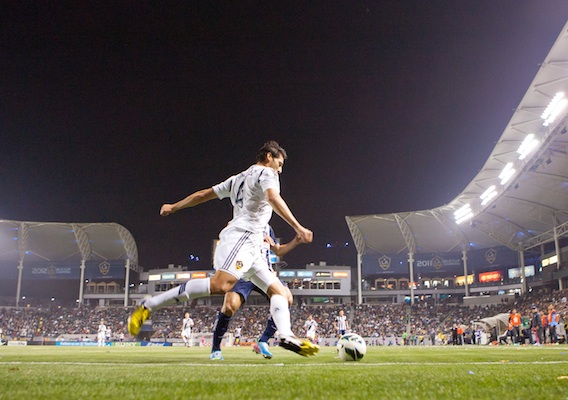 Scads of U.S. Soccer Stars Will Be on TV this Weekend

Jozy Altidore, Geoff Cameron, Clint Dempsey, Landon Donovan, Herculez Gomez, Omar Gonzalez, and Graham Zusi headline an all-star cast of U.S. soccer players heading toward a living room near you.
BY Eduardo Mendez Posted
April 19, 2013
1:34 PM
Epic clashes highlight this weekend’s soccer action. American soccer fans will have to wait until Monday to see how Brad Guzan fares against Manchester United, but that’s fine. There’s plenty of encounters featuring U.S. national team favorites beforehand. Here is your guide to this weekend’s action. FRIDAY
Santos Laguna vs. Monterrey 10:25 p.m. (all times Eastern)
Univision Deportes If Herculez Gomez isn’t familiar enough with Monterrey by now, he will be come May 1. Friday’s showdown in Torreon is the first of three matches in 12 days between these two Mexican juggernauts. Five days after Friday’s clash, the two will face off in the first leg of the CONCACAF Champions League final. Gomez is one victory on aggregate away from representing the American contingent in the FIFA Club World Cup, but first he must take care of business on Friday night. SATURDAY
Queens Park Rangers vs. Stoke City 10:00 a.m. Fox Soccer 2 Go, tape delayed at 2 p.m. on Fox Soccer Channel The relegation battle in the Premier League is heating up. With Queens Park Rangers and Reading looking likely for the drop, Stoke City is one of five teams within five points of an unhappy trip to the Championship. It’s bad enough that Geoff Cameron and Brek Shea's team hasn’t won since early February, but Stoke City has scored just two goals in the process. And one of those was a penalty. If there was ever a time for order to be restored, it’s now. Stoke will visit the woeful Rangers with an opportunity to capture a crucial three points. Should the Potters fail to do so, severe panic will ensue—and two Yanks could be playing Peterborough United—not Manchester United—next season. AZ Alkmaar vs. PSV Eindhoven 2:45 p.m. ESPN 3 The enigma that is Jozy Altidore continues his dominance of Dutch football. Unfortunately for the 23-year-old striker, his scoreless drought with the national team has left many questioning the validity of his staggering production. There’s no need for skepticism. Twenty-eight goals are 28 goals. Not only is it the most tallies in a season by an American abroad, it may be enough to punch his ticket to one of Europe’s top leagues. Altidore isn’t done yet. This matchup against PSV presents him with the opportunity to increase his total. Los Angeles Galaxy vs. Sporting Kansas City 10:30 p.m. NBC Sports Network It’s only Week 8, but this is a potential MLS Cup preview. National team veterans will be on hand to represent both sides of this MLS showdown. Graham Zusi has done an admirable job since becoming a fixture for the national team—temporarily replacing Landon Donovan during his self-imposed sabbatical. On Saturday night, both will share the same field, as will Matt Besler and Omar Gonzalez, the two central defenders who looked so wonderful against Mexico last month. Six points separate these teams in the standings, but the Galaxy have a pair of games in hand. It’s a late start, but this one is a must-watch match. SUNDAY Tottenham vs. Manchester City 8:30 a.m. Fox Soccer Channel Clint Dempsey’s impressive brace wasn’t enough to keep Spurs in the Europa League, and now Dempsey and company must get back to work with a spot in the UEFA Champions League at stake. A clash of epic proportions awaits Tottenham at White Hart Lane. No team in England is in better form than Manchester City. A resounding victory over Manchester United solidified their standing in the Premier League. A 2-1 victory over Chelsea clinched a spot in the FA Cup final. This is a must-win and a true test of Tottenham's resolve. Can Dempsey carry the Spurs back into the top four? BEST OF THE REST MLS: DC United vs. Philadelphia Union(5:00 p.m., Sunday, ESPN 2)—It’s time to start paying attention to Philadelphia’s Jack McInerney. The 20-year-old striker is heating up, and the 2013 MLS season could be his breakout season. MLS: San Jose Earthquakes vs. Portland Timbers(11:00 p.m., Sunday, UniMas)—Last week’s matchup between these two teams included a stunning free kick and a homophobic slur. What will these two Western Conference foes have in store for us late Sunday night? NO U.S. ANGLE BUT... Premier League: Liverpool vs. Chelsea (11:00 a.m., Sunday, Fox Soccer Channel)—Chelsea’s standing in the Premier League table is of great importance. A Liverpool victory will allow Tottenham to inch closer to a Champions League spot. Serie A: Juventus vs. AC Milan (2:45 p.m., Sunday, beIN Sport)—Two of Italy’s most prestigious clubs will go head-to-head. How could you not tune in? So what are you watching this weekend? Which matches did we miss that we should tune in for? Let us know in the new and improved comments section. Eduardo Mendez is a Brooklun-based writer and an ASN contributor. Follow him on Twitter.