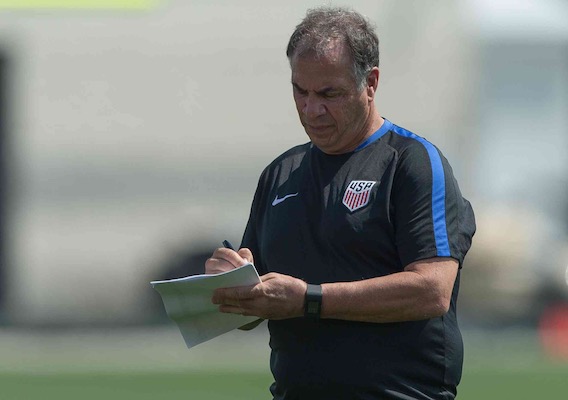 The Americans struggled through the first round of the Gold Cup but ultimately finished atop Group B. With new players now in the mix, Brian Sciaretta explores how the knockout rounds might unfold.
BY Brian Sciaretta Posted
July 17, 2017
11:00 AM

BRUCE ARENA made the maximum six changes to the United States national team roster for the knockout stages at the Gold Cup—moves that added experience to a team that had very little. The dismissal of Kelyn Rowe and Dom Dwyer, however, took a lot of people by surprise.

The squad now looks far different than it did a few days ago. With the exception of Jesse Gonzalez, the remaining five additions to the team can be expected to see the field at important times in the knockout stages.

Despite the addition of many known players, there is still a huge opportunity for Arena to learn about his team. Kellyn Acosta, Jordan Morris, Matt Hedges, Matt Maiaga, Jorge Villafana, and Paul Arriola are still new to the international stage in meaningful competition. All of these players are likely to play important minutes in the knockout stages.

There are also some players on the team who are not young but who are now being introduced into serious international competition, including Dax McCarty, Chris Pontius, and Justin Morrow. In the past, players in this category have found success with the national team in their late 20s and early 30s.

Finally you have players who were once part of the team but who have been on the outside looking in for the last several years: Eric Lichaj, Joe Corona, and Juan Agudelo.

It's unclear how all of these players will combine with the core members of the team. McCarty looked up and down playing alongside Acosta and Corona. But maybe he complements Michael Bradley and Darlington Nagbe very well. How effectively does Lichaj push into the attack while surrounded by experienced international players? There are all of these issues that need to be sorted out.

Here are some questions to follow as the Yanks attempt to make their way to the Gold Cup final in Santa Clara, Calif.

What is the top central defense pairing?

The four central defenders on the team are unchanged heading into group stages: Matt Besler, Matt Hedges, Matt Miazga, and Omar Gonzalez. All four made at least one start in the group stages with Gonzalez and Besler getting the nod twice.

It would make sense that Besler and Gonzalez should be the starting pair in the big games ahead as both have World Cup experience. Besler, in particular, played well and succeeded with his passing out of the back.

But Arena's selections have been tough to predict. If the coach wants to go younger, perhaps Miazga can sneak in and replace Gonzalez, who had some shaky moments in the first two games. The fact the U.S. dodged Costa Rica in the quarterfinal and instead plays a weaker El Salvador might allow Arena to play another pairing in the back to evaluate what is the best tandem ahead of the tournament’s most challenging teams.

Zusi or Lichaj at right back?

Graham Zusi is still getting used to the right back position and it's still too early to see if he will ever be at the level to back up the starter, DeAndre Yedlin. Like just about every player, Zusi had mixed performances in the group stage but Arena likes what Zusi can do with crosses and set piece delivery—as we saw on his spot kick that set up Miazga's late goal against Nicaragua.

Lichaj has had just one game so far with the U.S. this window, in the 3-2 win over Martinique. The Chicago native was effective pressing forward into the attack and assisted on one of the goals. He also had a mental error in a turnover that gifted Martinique a good chance. Lichaj, like the other European based players, is still in preseason although he should be in better form now after three weeks with the U.S.

The knockouts should help provide clarity as to who might be Yedlin’s backup at right back—with Timothy Chandler still in the mix despite missing the Gold Cup.

How will the central midfield be aligned?

Michael Bradley will start for the U.S. and be the team’s captain—that much is clear. Arena has been willing to mix up the team’s formations quite a bit, however, so he might opt for either two or three central midfielders at any given time.

Acosta needs to show more in the knockout rounds than he did during the group stage. He has the requisite talent but his responsibilities expanded significantly against Ghana, Panama, and Martinique—and he didn't wow anybody. Now with the chance to be partnered with Bradley, he might be in a more comfortable setting playing alongside a leader with more experience.

McCarty, a crisp passer who has enjoyed some nice moments the past few weeks, could also see some action. Bradley played well with a younger Kyle Beckerman and perhaps McCarty can fill that role.

Who will see action at the forward spot?

With Clint Dempsey and Jozy Altidore now on the team, four forwards will battle for one or two starting spots on this squad. It seems likely that Arena will go with a two-forward set at least part of the time.

The forward pool is both deep and thin at this point. Altidore is still one of the team’s best forwards and is having a nice season with Toronto FC. But Altidore, along with Bobby Wood and Clint Dempsey, has struggled with injuries and health in recent years.This will potentially be the first major tournament Altidore is healthy for after injuries ruled him out of the 2013 Gold Cup, forced him off the 2015 Gold Cup team after the group stages, and limited him to all but the first 20 minutes of the 2014 World Cup.

So Altidore will arrive with the team healthy for his first major tournament since the 2011 Gold Cup. It's fair to expect him to be motivated and eager to prove himself. Dempsey, meanwhile, is clearly on the tail end of his career but could set the United States' all-time scoring record at this tournament. Will he be a bench option—and if so, how will he respond to the role?

Juan Agudelo and Jordan Morris will look to grab what could be the final forward spot moving into the final stages of World Cup qualifying. These two players have all the motivation to impress but which one will make the bigger statement?

Why were Dwyer and Rowe replaced?

This is the biggest question over the past day. If you asked many in the media, myself included, which players impressed the most during the group stages many would have said Kelyn Rowe and Dom Dwyer. (For me, it was in that order). One person who knows both players said they were “surprised” when hearing the news that they were heading home before the knockout round.

The last few weeks have been nothing short of amazing. Full of emotions, learning experiences… https://t.co/lC1kfijQZq

To be fair, Rowe’s defense was bad at times and there are legitimate concerns that would bring with starting him against a talented opponent with a lot of offensive firepower. But if the U.S. needs a goal in the second half, Rowe seemed like a great option off the bench. He was full of ideas of how to create opportunities—both for himself for his teammates. He is a threat from long distance and is good at moving into space.

If many of the top U.S. players were also on the team, cutting Rowe would be understandable. But Arena elected to keep Chris Pontius instead. Pontius, 30, has had a decent career whenever healthy (he’s struggled mightily with injuries over the years) but when looking at the past few weeks he seemed to be behind Rowe based on minutes played, age, productivity, and the fact that Pontius only made the team due to a late injury to Kenny Saief.

Delighted for the opportunity, honored to get a few caps and show a little bit. I wish the… https://t.co/wtv6zC7a9P

The decision to cut Dwyer is also puzzling. Dwyer scored two goals in his three games in July and also drew a penalty (which he failed to convert). Dwyer saw the field more than Morris and Agudelo and while Morris also had two goals in the Martinique game, no one clearly outperformed Dwyer.

Arena did say that all the players released showed well but it will be interesting to see if he shares more details on why he cut Rowe and Dwyer when he faces the media in Philadelphia.

It will also be interesting to see how Dwyer and Rowe perform for their clubs in the weeks ahead after getting their first taste of the international game.

What do you think of Brian's take? Expect good things from the U.S. in the knockout round? Share your view in the Comments section below.