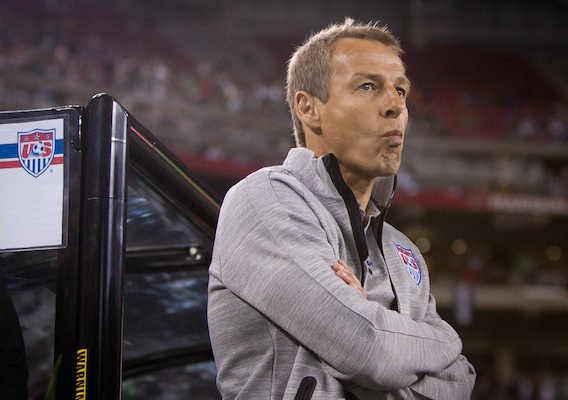 Roster Spots: What Jurgen Said, and What We Heard

Jurgen Klinsmann recently spoke about the current state of his roster, but a man in his position can't always say exactly what is on his mind. So ASN's John Godfrey decided to read between the lines.
BY John Godfrey Posted
April 22, 2014
12:48 PM
[Editor's note: Jurgen Klinsmann's quotes below are current, and official. John Godfrey's interpretations are strictly current.]

What Klinsmann said:
"Tim Howard is becoming an automatic—winning and performing really, really well. Fabian Johnson at Hoffenheim had a very good game. Jermaine Jones is back in a rhythm with Besiktas—it's good to see. It was about time. Obviously Clint Dempsey is scoring goals." What we heard: "The spine is intact. It's also a bit bigger than previously stated: Fabian Johnson is officially one of our best players and he will be on the field for 270 minutes in the group stage."

What Klinsmann said:
"What Jozy is going through right now is an extreme negative. But at the end of the day you have to manage those phases. We all hope that Jozy keeps his head up and is positive and waits for his next opportunity. Sooner or later he's going to score. I know why he's not scoring goals for Sunderland right now. He's a very, very important part of our team, Jozy, and I'm very convinced he's going to do well [in Brazil]." What we heard:
"Six months ago I might have used a situation like this to go negative, to scold Jozy as a motivational tool. But now we're too close to Brazil for that. Now it's about making sure that he doesn't get too low, or too depressed, about his awful year in England. Jozy is going to start against Ghana on June 16. I know that. He knows that. And now you know that. And hopefully we can help him regain his confidence, and scoring touch, in the three send-off games before we fly to Sao Paolo."

ON STRIKERS AND CURRENT FORM

What Klinsmann said:
"I think for strikers [scoring goals consistently] is huge because every goal you score makes you feel good. It gives you that confidence you need going into that next game." What we heard:
"Chris Wondolowski and Eddie Johnson are fighting for the fourth striker spot on the World Cup roster. Wondolowski has scored three goals in his last five matches for San Jose, and three for the national team this year. Johnson is 0-for-2014. They'll both join the team in Stanford, but right now it is Wondo’s spot to lose."

ON SPECIFIC POSITIONS WITH OPEN SPOTS

What Klinsmann said:
“I think at the end of the day you try to put the puzzle together in a way that makes sense for everybody.” What We Heard:
"Matt Besler is the only defender I have who has a set position and a guaranteed spot in the Starting XI—and he’s not exactly Fabio Cannavaro. I'll probably stick Fabian Johnson at left back. But after that? No clue. The back line is wide open at this point. Is it Geoff Cameron in the middle? Is it Clarence Goodson? Am I going to invite somebody like Chris Schuler or Tim Ream into the provisional roster? Stay tuned and find out."

ON WHAT PLAYERS CAN DO NOW

What Klinsmann Said:
"Some have to step it up a little bit in MLS—people we have not been so happy with the last couple weeks. Some Europeans have to keep the consistency now. Some players in Mexico—we watch them every game—they're right there where we have those discussions, 'Will he make it or won't he?'" It's still an ongoing process but when we get closer to that deadline you make a decision based on what you saw in the past—not only in the last couple of weeks but over the past two-and-a-half years." What we heard:
"Expect to see Edgar Castillo, Julian Green, Danny Williams, Mix Diskerud, Kyle Beckerman, Brad Evans, and Terrence Boyd on the 30-man provisional roster. Herculez Gomez, Joe Corona, Jose Torres, Juan Agudelo, John Brooks, and Sacha Kljestan are out. And I have no idea what to do about Brek Shea—do you?"

What Klinsmann said:
"That's the biggest fear in the back of everybody's mind—an injury issue. We're keeping our fingers crossed that nobody gets injured any more." What we heard:
"My two best players, Michael Bradley and Clint Dempsey, both play too many games on plastic fields. If either of them miss World Cup games because of artificial turf, I'm going to stick my head in the oven."

What Klinsmann said:
“Soccer, eventually, is a running game. The higher levels you go the more you realize they are fitter, faster, and also faster thinkers. The mental speed as well as the physical speed. The highest levels, as we often say, is the Champions League, and obviously the World Cup. You will see that the best teams going down to the final will also be the fittest. You make the mistakes when you are out of breath. You make the mistakes when you are tired. That's human. That's the moment where we hopefully won't make mistakes and we stay focused and make the right decisions.” What we heard:
"We don’t have a Cristiano Ronaldo or a Lucas Podolski, but I am going to make sure we will be the fittest team in Brazil. If we can wear the other team down, we give our chance to get results in the final 10-15 minutes."

ON THE IMPORTANCE OF VERSATILITY

What Klinsmann said:
“I don't think it's the most critical thing when it comes to making a World Cup roster. When you're versatile, it’s great to have that option to be able to play right back as well as center back, for example. On the other hand players that are more versatile struggle more because you never know what is his best position. The thing is, if you don't play the same position for the national team that you play for your club team, it's always a little bit of a juggle, a balancing act, to make it into that final roster. There are good things about it. There are bad things about it. It is a tough one.” What we heard:
“Brad Evans and DaMarcus Beasley will probably make the team, but they’re not going to be my first-choice fullbacks.”

ON MAKING THE FINAL CUTS