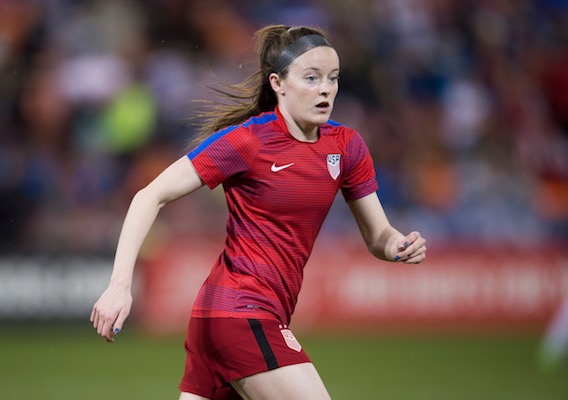 Twenty-one-year-old Rose Lavelle was the first pick in the NWSL draft in January, made her U.S. national team debut shortly afterward, and is now with her international teammates as they prepare to face Russia.
BY John D. Halloran Posted
April 05, 2017
10:00 AM

THE LAST FEW WEEKS have been a whirlwind for Rose Lavelle.

In March, she made her much-anticipated United States women's national team debut in the SheBelieves Cup. Then Lavelle headed to Boston for a few weeks of preseason training with the Breakers—the team that selected her with the first pick in January's National Women's Soccer League draft.

Currently the Ohio native is in Dallas, back with the national team and preparing for Thursday's friendly against Russia (8:30pm ET, FS1).

While Lavelle had been called into U.S. camps on a number of occasions prior to the SheBelievesCup, she didn't earn her first cap until last month. The night before the team's match against England, head coach Jill Ellis told her young midfielder that she'd be getting the start.

"I honestly thought Jill was joking at first," Lavelle told American Soccer Now. "And when I found out she was serious I was like, 'OK, I've got to get my mind right now.'

"That night I relaxed and tried to stay focused and stay calm and just put myself in the best position to succeed the next day."

The next evening, the University of Wisconsin alumna didn't disappoint, putting together a dazzling display of skill in her inaugural appearance on her way to Woman of the Match honors.

After the game, Ellis called the performance "phenomenal" and Lavelle proved she could put away any first-match jitters.

"Playing England, especially, made it 10 times more nerve-wracking," said the midfielder. "I think after the first couple minutes I finally got my groove and was able to settle down a little bit."

Despite Lavelle's stellar individual performance, the U.S. lost the match to England and then lost to France three days later. While Lavelle earned a second consecutive start in the game against France, the 3-0 loss saw the Yanks finish dead last in the tournament.

"We didn't get the results we wanted, but if there was a time to try new things, it would be now. Obviously, we don't have a World Cup or an Olympics coming up right now so, I mean, it is what it is," explained Lavelle.

"You learn from it and move on and now we look to redeem ourselves in these next upcoming games."

In a national team program full of players traditionally known for their size and speed, the first thing one notices while watching Lavelle play is her technical quality. Developed during long sessions of backyard soccer, the budding maestro was forced to find ways around her physical limitations.

"I was a very small player growing up, so I had to learn ways to be on the ball, but not have anybody get close to me so they couldn't knock me off of it."

In the debate over America's youth soccer landscape, many claim that players like Lavelle—small, but technical—often get overlooked. However, the 21-year-old doesn't think that's the case.

"I think when you get noticed, you're getting noticed for your strengths, not your weaknesses. If you have something to compensate for your weaknesses than that's what's going to get you noticed," she observed.

"Obviously, you can't ever stop working at the things you need to improve on, but the things that make you special are the things that are going to get you noticed. Maybe they'll have some hesitation because you're small, but you just have to play bigger than your size."

A star of the 2014 U-20 World Cup team, Lavelle saw several other players from that squad earn senior team caps ahead of her, including Lindsey Horan, Mallory Pugh, and Andi Sullivan.

While she's been happy to be back among her youth national team friends during these last few camps, she also said the team's veterans have helped make for a smooth transition to the next level.

"My first camp I was so scared to come in, but [the veterans] were all so nice and made it so much easier."

After the U.S.' two matches against Russia, it will be back to Boston for her NWSL debut. The Breakers have finished last in the league for two consecutive seasons but managed to stockpile four first-round picks in this year's draft.

Still, Lavelle is keeping expectations for Boston in check.

"First off, we just want a be a team that competes every game," she said. "I think with the players Matt brought in, he obviously has a good mix of experienced players and younger players and I think that combination is going to work in our favor.

As hectic as the past few weeks have been, things aren't likely to let up for Lavelle any time soon. The U.S. players will return to their clubs next week before reconvening in Europe for a pair of friendlies in June. Then, after a short stint back with their clubs, there is another international break in July.

Lavelle knows it will be a long haul over the next few years, but she has her sights set on making the 2019 World Cup roster. However, she isn't taking anything for granted.

"It's been a fun couple months, but I can't let it go to my head. I still hopefully have a long career ahead of me."