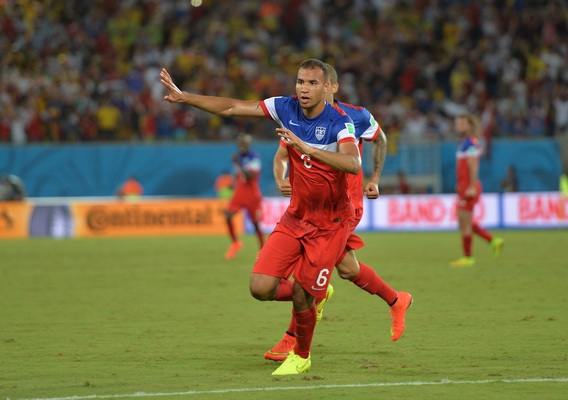 You saw John Brooks' 86th-minute strike. You've read about the dream he had two nights prior. But we're hoping you haven't experienced the 21-year-old defender's magic moment quite like this.
ASN Slideshow

BY John Godfrey Posted
June 18, 2014
8:09 PM
NATAL, Brazil—When U.S. Soccer press officer Michael Kammarman escorted John Brooks out to meet a throng of quote-hungry journalists assembled in the mixed zone in Arena das Dunas Monday night, he wisely advised the microcassette-wielding scribes to modify their expectations, and relax. "Take it easy, guys," Kammarman said. He was right to do so. Brooks, 21, was born and raised in Berlin, plays his professional soccer for Hertha Berlin, and speaks what can best be described as halting English. (It's far better than my non-existent German, I hasten to add.) Brooks hasn't had to face the English-speaking media very often because, well, in his four previous appearances for the United States national team, he hasn't accomplished a whole lot. But on Monday night in Brazil, Brooks came on at intermission for an injured Matt Besler in a hugely important game for his adopted country. The six-foot-four central defender struggled a bit at first but eventually found the pace of the game and did a solid job against a potent Ghana attack. And then, of course, Brooks scored the biggest American goal since Landon Donovan's late strike against Algeria in the 2010 World Cup. Less important but equally impressive, Brooks thoroughly charmed the U.S. media contingent with his openness and humor. Here's a lightly edited version of Brooks' interaction with the press just a short while after his header gave the U.S. a 2-1 win to open its 2014 World Cup campaign. JOHN BROOKS: "It's a great moment for me. It's unbelievable. I had a dream. I told some teammates that I dreamed that I scored in the 80th minute and we win the game. Now it was the 86th minute, and we won. So, that's good. THE PRESS: When was the dream—last night? "Two nights ago." How did you score in the dream? "Also with a header, yeah." [Laughter] Also on a corner? "Yeah." Were you nervous when you came on? "Yeah, of course. Of course. The first few moments I was very nervous." How tall are you? "Six-four." Did you talk to the vice president? "No, not yet." Have you dreamt about scoring goals in the past? "No, it was my first dream." [Laughter] "Hopefully not the last." [Laughter] Did you tell Jurgen you had that dream before the game? "No, no, no. I just talked to my teammates." Did you talk to your family in Germany or Illinois before the game? "I talked a lot to my family. Before the game I talked to them again and said I just start at the bench. They said, 'That's OK. Hopefully you come in.' Yeah, I came in. And now it's great." What did you think of the game overall? "The first goal was, yeah, perfect. A perfect start. It couldn't be better. Ghana is a very good team. They showed it. But we played also very good." What have you learned since coming into training camp on May 14th? "A lot. I'm not that kind of person that talks a lot. They always told me that I should talk because my position is very, very..." Communication? "Yeah. You have to talk a lot. I'm trying hard and it's getting better." Can you describe the run on the goal? What were you thinking? What kind of run did you make? What did the defender do? "I just ran in the box and hoped that the ball land on my head. And it did." [Laughter] When you came on in the second half, did you remember the dream? "No. I didn't remember the dream. I remembered it right after I scored. When I came in I just wanted to do simple things." In other words, he ran into the box and the ball landed on his head. Job well done, Mr. Brooks—both during the game, and after. John Godfrey is the founder and editor in chief of American Soccer Now, and he'd like to hear your thoughts about Brooks' big moment.