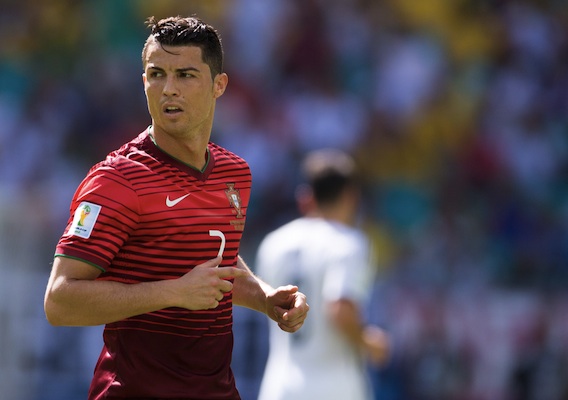 We reached out to a variety of soccer pundits—writers, broadcasters, former players—and asked them what they would like to see the U.S. do against Portugal on Sunday.
BY various Posted
June 20, 2014
8:39 AM
Michael Lewis, Newsday and BigAppleSoccer.com
If Cristiano Ronaldo starts, the United States must find a way to contain him, including roughing him up and frustrating him as much as possible. Lost in whether Ronaldo is healthy is the fact Portugal will be missing two starting defenders—key players. How will the team take advantage of that? Kyle Martino, NBC Sports soccer analyst and host
When Jozy pulled up lame first thought on everyone's mind was, "It would be nice if Landon was there!" I agree, but the injury highlights a different roster decision oversight from Jurgen Klinsmann for me: no natural replacement for Altidore. Any way you slice it I think this moves the U.S. into a 4-2-3-1 with either Johannsson or Clint up top and Jermaine Jones moving centrally with Graham Zusi starting on the right, moving Bedoya to left. Klinsmann has been married to the diamond 4-4-2 shorter than Kim Kardashian was to that poor sap, wouldn't be surprised if he scraps it. CLICK HERE: HOW WOULD YOU APPROACH PORTUGAL? Matt Futterman, Wall Street Journal
Stopping Ronaldo will take a combination of intense pressure on Portugal’s midfield, to make it difficult to feed him balls in dangerous positions, and at least two players to converge on him once he gets the ball. The more offensive-minded midfielders like Michael Bradley and Alejandro Bedoya have to chase back to fill in open spaces and help in defense. Fabian Johnson, the right back for the U.S. who has been wreaking havoc with his runs up the wings the past month, will likely have to temper those efforts.

John Godfrey, American Soccer Now editor in chief
First, do some harm: Frustrate Ronaldo with a steady supply of bone-crunching tackles. Second, swap Dempsey with Johannsson up top so the Iceman can play to this strengths in a withdrawn striker role. Third, send Fabian Johnson forward at every opportunity, as he can unlock Portugal's depleted left side of the defense. Also, Sunday's game has Jermaine Jones' name all over it. He carried the United States—yes, the entire country, which includes quite a few fatsos—on his back against Ghana, and if he can deliver a similarly smart and physical performance in Manaus, the Yanks can win this one going away. Kevin Baxter, Los Angeles Times
I'm the L.A. guy so I'm pretty much obligated to point out that the U.S. would be in a much better position if they had the experience of Landon Donovan to replace Altidore instead of Aron Johannsson or Chris Wondolowski. But now that the U.S. is protecting a five-goal lead in goal differential, Matt Besler's hamstring may be the more important one now—especially given that the game will be in the sauna of Manaus, where dehydration could lead to muscle cramps and other problems. Blake Thomsen, American Soccer Now contributing editor
I don’t have a specific formation in mind, but I do think it’s imperative for the U.S. to play with five in midfield, ideally with Clint Dempsey as a lone striker. More ball retention than the U.S. saw against Ghana is imperative, and a five-man midfield would certainly help. Ball retention will be especially important in the heat and humidity of Manaus, as the U.S. doesn’t want to spend the whole game chasing the ball and losing energy. As for specific personnel, let’s see Bedoya over Zusi and Besler over Brooks, but only if he’s truly 100% fit. Will Kuhns, Supervising Producer, MLS+
First, the real Michael Bradley starts. Next, this situation and personnel call for a 4-5-1: Howard; Johnson, Cameron, Besler, Beasley; Zusi, Beckerman, Bradley, Jones, Davis; Dempsey. Create a net 30-50 yards from our goal that entangles the Portuguese and denies thru ball service. When we win the ball, keep it on the ground, make safe decisions, and counterattack when it’s on. Mimic, as best we can, Chile's strategy against Spain. Davis and Zusi clog flanks and ping long, diagonal passes. Johnson and Beasley selectively join the counter. Noah Davis, American Soccer Now deputy editor
Start fast. Maybe not as fast as the team did against Ghana—although we can hope, certainly—but quickly enough that Portugal feels punched in the mouth. The European team is on edge, frayed after getting smashed by Germany, and with its best player limping around on his tree trunk legs. The Americans don't need to score early, but if they can create a few chances, their opponents will start to worry, start to fight, start to capitulate. The road to a point or three is pretty simple. Oh, and don't make Aron Johannsson play target forward. He's not that player. Jonathan Tannewald, Philly.com
I’m more interested in Pepe and Fábio Coentrão being out than how to defend Ronaldo. Mr. Hairgel is who he is, and the U.S. defense is what it is. I think Portugal’s defense can be beaten. I’d go with Zusi over Bedoya and Jóhannsson’s speed up top. But above all, I care more about getting a result than how it’s done. It’s possible that Sunday’s game could be the most-watched soccer broadcast in American television history. The greater public doesn’t care if it’s 1-0 or 4-3, as long as the U.S. doesn’t lose. I don’t blame them. John D. Halloran , Bleacher Report, ASN
The big question heading into the match against Portugal is, who replaces Jozy Altidore as the team's target forward? While the obvious answer might seem to be a choice between Chris Wondolowski or Aron Johannsson, I'd go with Clint Dempsey. The fact is, there is no like-for-like substitute for Altidore on the U.S. roster and Dempsey is the only player who can replicate Altidore's physicality. Filling in Dempsey's role as the withdrawn forward could be then be Johannsson (his preferred role), Mix Diskerud or Alejandro Bedoya—who occasionally played the No. 10 role this season for Nantes in Ligue 1. Liviu Bird, Sports Illustrated
I took a lot of stick from fans on Twitter for saying Portugal’s situation against Germany didn’t do anything for the U.S. It didn’t—until the U.S. beat Ghana. Now, the Americans have an opportunity, with Portugal short its best center back and a serious attacking threat on the left. The replacements there are capable, but not up to the same level. To take advantage, the U.S. will have to play positively and get after the game from the start. This is no longer a time to sit back; it’s time to attack and dictate the game.

J. Pat Miller, Newsradio 620 WTMJ
Conventional wisdom said the U.S. had no chance of winning a World Cup match if Michael Bradley wasn't in top form. Against Ghana, Bradley looked out of sorts and possession struggled resulting in wave after wave of attacks on goal. For a portion of the game the team looked more like a hockey penalty kill than an uptempo, dangerous Klinsi-dream. Against Portugal, I want to see General Bradley return to form to dictate play. Building through the midfield will help contain Ronaldo's chances and avoid the Howard long balls to the front without Jozy as the target forward. Brooke Tunstall, American Soccer Now contributor
The U.S. ceded a vast majority of possession to Ghana and still came away with three points but that’s not a realistic path to consistent World Cup success. They’ll need to hold the ball more and create more chances and that likely means a much-improved performance from Michael Bradley, who wasn’t his sharpest Monday. To help Bradley, Dempsey and Johansson should switch roles to better utilize Deuce’s size and Johannsson’s skill-set, giving the U.S. both more size up top and more playmaking. And Johannsson can’t be the ghost he was Monday—he needs to be a consistent threat. Jon Arnold, Goal.com, ASN
John Brooks is a hero, but he’s not a starter. The U.S. will look to take advantage of absences in Portugal’s back four, bit its own might be even more important. Cristiano Ronaldo got frustrated against Germany. If you can achieve that same level of frustration and take him out of the game, you’re cruising onto Group G glory. If not, Ronaldo—fully fit or not—will be able to take advantage. You need your already-shaky back line to be top notch to do that. And for that you need Matt Besler. Matt Swift, ASN Social Media Director (and ASN_1 on the site)
After spending two hours with the Starting XI tool, I’ve determined that the U.S. should employ a 4-3-2-1. Let Dempsey operate freely up top with Mix and Bradley lurking underneath. Slide Zusi on the left as his service is too valuable to sit him for 60 minutes, and then you place Jones on the right this time to deal with Ronaldo. That may sound mad but you are not utilizing Jones to get forward, and I very much like the thought of Jones cracking Ronaldo over and over again. Brooks starts over Besler unless Matt is 100%; can’t risk subbing a central defender. OK, your turn. You have 100 words—tell Jurgen Klinsmann what needs to happen in the jungle.