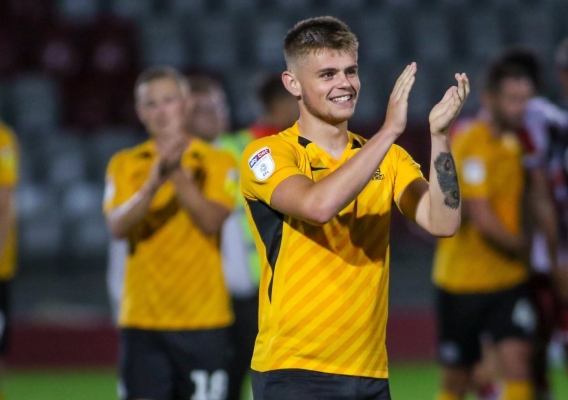 It was a busy week of soccer for American players - both domestically and abroad. ASN's Brian Sciaretta breaks it down.
BY Brian Sciaretta Posted
August 15, 2019
10:00 AM
THIS WEEKEND HAS HAD a lot of action both domestically and abroad with the top story coming from Christian Pulisic putting on a show in the first half for Chelsea in the UEFA Super Cup loss to Liverpool. But that was far from the only news item.

Christian Pulisic earned the start for Chelsea in the UEFA Super Cup vs. Liverpool. Liverpool went on to win on penalties but the Hershey native had a great first half before being subbed out in the 74th minute.

Pulisic, 20, assisted on the opening goal and soon after had a goal called back – but still showed a ton of skill.


The goal that wasn’t for Pulisic pic.twitter.com/fBA0aNnzVV

Super Cups of all kinds are generally meaningless but this was important to build up both Pulisic’s confidence and the team’s confidence in him. The opening game of the Premier League was poor for everyone involved but as Frank Lampard looks for a different approach this weekend at home against Leicester, Pulisic made a strong case to be involved.

Also, for those wondering if Pulisic is a winger or a No. 10 at Chelsea, he showed the ability to do both. That assist came from a No. 10 role.

Kelman should at least be in the mix for the United States whenever the U-20 team gets rolling again for the 2021 cycle. Along with Alfonso Ocampo-Chavez and Ricardo Pepi, it should be a good group of forwards at the start.

Shelton to remain at Paderborn


According to Neue Westfalische, American forward Khiry Shelton was considered to go out on loan – likely to Greuther Furth. But his positive performance in the German Cup over the weekend has led to the club deciding to keep him for the start of the Bundesliga season.

Sunderland defeated Stanley 3-1 in the League Cup on Tuesday. One of the most impressive images from that game was the aftermath of the awful collision American midfielder Lynden Gooch took.


@LyndenGooch asks last nights ref about his thoughts on a challenge #SAFC pic.twitter.com/vMqBwxYx5H


Like any kind of “Super Cup,” the meaningfulness of the competition is up for debate. But this game had a fair amount of trash talking leading up to it (lead by Pity Martinez) and with the impressive environment at Mercedes Benz Stadium, it made for a good show and there certainly was an elevated intensity with a top Liga MX opponent.

In the end, Atlanta United won 3-2 over Club America and what was impressive about Atlanta was how well some of the American players played – on a team that usually gets attention for its expensive foreign imports.

Emerson Hyndman scored the opening goal and his move to Atlanta has really worked out well so far. Miles Robinson is doing extremely well in central defense and Darlington Nagbe has also been great in recent weeks.

Don't be surprised if Hyndman starts making a move into the U.S. national team depth chart. All we learned from the early stages of his career is that he wasn't a good fit for Bournemouth and he was too good for Scotland. But he is reminding everyone about why he was considered so talented as a young player.

In the various MLS games on Wednesday night, the most important were the Galaxy’s 2-0 win over FC Dallas and Portland’s 3-2 win over Chicago.

With those results, Portland overtook Dallas for the final playoff position and the Galaxy finally got back on the winning track after a brutal stretch of games.

Dallas is in a tough spot right now because it is not going to get back ahead of Portland anytime soon. Portland’s game on Wednesday was its second of a massive 10 game run where it will play all of its games at home. Portland is set to take off.

In the loss, FC Dallas manager Luchi Gonzalez is trying very hard to figure out ways to make his team’s attack more lethal in the final third. One of his ideas has been to move forward Jesus Ferreira into an attacking midfield position so he sees more of the ball. The downside to this, however, is that it has moved the surging Brandon Servania to the bench.

Meanwhile, Real Salt Lake is playing well despite the recent firing of head coach Mike Petke. On Wednesday it downed Seattle 3-0 and looked impressive in many different areas. Not only was the team able to hold Seattle to without a shot, but it has a wide variety of attack including Albert Rusnak, Damir Kreilach, and Jefferson Savarino.

Real Salt Lake could be a dangerous team in the playoffs if it can finish in second place. That would allow it to play all games at home until a potential Western Conference final against Los Angeles FC.