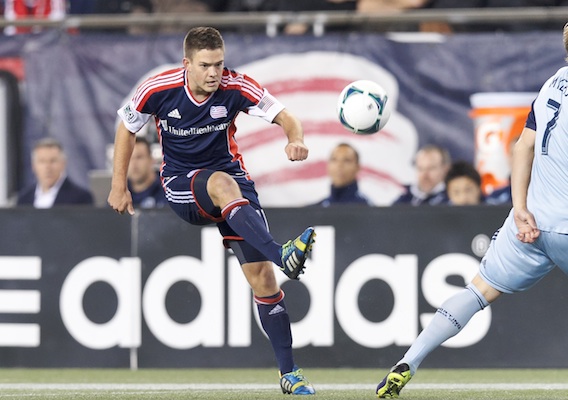 Jurgen Klinsmann has discovered several gems in his last two January training camps. Will the U.S. coach find a few World Cup-worthy players in his 2014 camp? Brian Sciaretta looks at the potential roster.
BY Brian Sciaretta Posted
December 12, 2013
1:29 PM
THE UNITED STATES JANUARY CAMP is still several weeks away but with the 2013 MLS season now in the rearview mirror, now is a good opportunity to look toward 2014 and the important World Cup preparations that lie ahead. Since Jurgen Klinsmann's arrival in July 2011, the January camp has yielded mostly underwhelming games but the camp has been very productive overall. The 2012 camp saw Graham Zusi and Geoff Cameron earn their spots on full national team while the 2013 camp did the same for Matt Besler, Brad Evans, and Omar Gonzalez. Anything is possible, but the 2014 edition is not likely to produce new players suddenly ready to make the team heading to Brazil. Still, the camp will offer Klinsmann a chance to field many regular players and fine-tune the team ahead of the World Cup camp in May. For this prediction, I had to make a few assumptions. The first: Clint Dempsey will be out on loan and will not attend. (For the purpose of this exercise, we will assume that all MLS players except for Dempsey are going to be available and that no Americans will be transferring back to MLS.) Second assumption: Juan Agudelo will be with a European club even though his U.K. work permit was denied. The third is that while the Austrian Bundesliga is on break through February 7, Terrence Boyd is likely to remain with Rapid Vienna. The fourth is that the roster will consist of 25 players since that was the size of the team in 2013. Having said all of that, here is my predicted roster.

Nick Rimando
Sean Johnson
Bill Hamid
Notes: After a successful Gold Cup, Nick Rimando and Sean Johnson are safe bets to make the team. Bill Hamid has the third spot since he made the trip to Scotland and Austria but it wouldn’t be a surprise to see Tally Hall make the team as well. In the running: Tally Hall, Luis Robles

Brad Evans
DeAndre Yedlin
Clarence Goodson
Omar Gonzalez
Matt Besler
Chris Schuler
Chris Klute
Corey Ashe Notes: Central defense is a strong point for this team. Goodson, Gonzalez, and Besler are all likely to make the World Cup roster. Chris Schuler could be a surprise pick for the fourth central defense spot after being one of the best players in the MLS playoffs. Brad Evans is a lock at right back for January and he appears heading for Brazil. His Seattle teammate DeAndre Yedlin had a terrific rookie season and might get the nod over Tony Beltran as backup right back. Left back is wide open at the moment given that all of Klinsmann’s options at that position are based abroad. The best choices are likely Chris Klute, who had a very good season at Colorado, and Corey Ashe, who was called up in May but withdrew because of an injury. Also in the running: Tony Beltran, Kofi Sarkodie, Carlos Bocanegra, George John, Amobi Okugo, Sheanon Williams, Seth Sinovic, Matt Hedges, Nat Borchers, Jide Ogunbiyi, Justin Morrow, Andrew Farrell

Mix Diskerud
Dax McCarty
Kyle Beckerman
Graham Zusi
Brad Davis
Dillon Powers
Luis Gil
Kelyn Rowe
Benny Feilhaber Notes: Diskerud, Beckerman, Zusi, and Davis are obvious locks after all having played in one or more of the World Cup qualifiers this fall. In terms of other veterans, Dax McCarty had success in defensive midfield for the New York Red Bulls this year and Benny Feilhaber has finally showed consistency at the club level. For younger players, MLS Rookie of the Year Dillon Powers was an obvious choice and Kelyn Rowe had a very good year for the New England Revolution, serving as a vital component in a youthful attack. Luis Gil is one of the most experienced American players for his age and he has been integral in helping Real Salt Lake return to the MLS Cup. Also in the running: Perry Kitchen, Chris Pontius, Ricardo Clark, Gyasi Zardes, Conor O’Brien, Ned Grabavoy

Landon Donovan
Eddie Johnson
Mike Magee
Chris Wondolowski
Jack McInerney Notes: Landon Donovan and Eddie Johnson are of course locks after regularly featuring in World Cup qualifying. Chris Wondolowski is also likely to take part after he was selected to be on the roster for the recent friendlies against Scotland and Austria. It is hard to make a case against Mike Magee at this point. He was one of the best players in MLS this year and scored regularly for both Los Angeles and Chicago. Yes it's true that scoring in MLS does not always translate into international success, but Magee is an intelligent and crafty player. It seems likely that Klinsmann would be curious to see what the Chicago-native can bring to the table. Jack McInerney was scoring goals on a seemingly weekly basis but he slowed down a bit after the Gold Cup. A January callup may be an opportunity for Klinsmann to give him another look. Also in the running: Will Bruin, Lamar Neagle, C.J Sapong. This is what Brian thinks. What do YOU think? Who on this list doesn't belong in camp? Who do Brian exclude? Share your thoughts below.