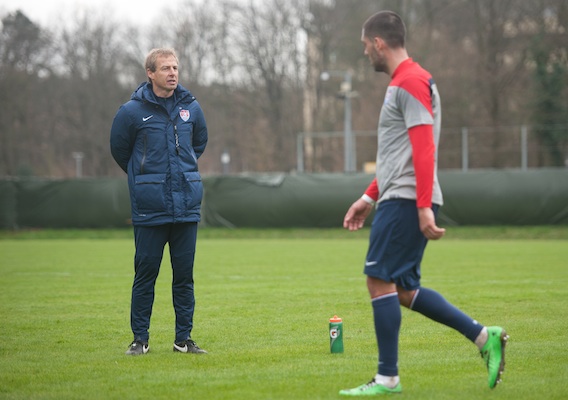 Professional sports coaches can’t always speak candidly—especially after brutal losses. So we took it upon ourselves to interpret some of Jurgen Klinsmann’s post-game comments.
BY John Godfrey Posted
March 06, 2014
10:23 AM
What Klinsmann Said About the Ukraine Match: “First of all, we want to give a big thank you to the Ukraine Football Federation and also the Federation of Cyprus for making this game possible. They really deserve a big compliment for making this happen with everything being very hectic these last few days with everybody involved. We are very glad we were able to get it done and have the opportunity to play this match tonight.”
What We Heard: "Where will the next overseas friendly be played—Dagestan? Somalia? This entire situation could have been avoided." What Klinsmann Said About the Back Line: “Once you watch the game again on tape and see the mistakes we made, especially with the two goals, there’s a series of mistakes that happened there. In the second half, the first 20 minutes, we looked good—we pushed it, we had opportunities to score. If we get a goal there, the whole game could turn around in our favor, but with the mistakes that happened prior to the second goal they basically closed it down.”
What We Heard: "Here are your starters for Brazil: Geoff Cameron, Omar Gonzalez, Matt Besler, and Fabian Johnson. Everybody else is fighting for a backup spot." What Klinsmann Said About Tim Howard: “Standouts include, certainly, Tim Howard because he made a couple of good saves. Both goals happened on rebounds that he first saved.”
What We Heard: “Brad Guzan and Nick Rimando might as well bring their snorkel gear to Brazil because they are not getting anywhere near the pitch.”

What Klinsmann Said About the Game Flow: “It was difficult for a lot of players to get into a rhythm, to stand out. It’s important for us to know where these players are at this specific point.”
What We Heard: “Sacha Kljestan looked completely lost out there.” What Klinsmann Said About Positive Takeaways: “It would be totally wrong now to criticize what went wrong. It was clear to us that playing a completely new backline, playing players that come out of the club system, who are in a difficult situation not having the same confidence they usually have, there’s a lot of work to be done.”
What We Heard: “There weren't any." What Klinsmann Said About Anatoliy Tymoschuk: “He’s a player you can see is on the Champions League level that we often talk about. He runs the show like a quarterback and gets everybody on the same page. Even if they’re not aware or alert, he wakes them up. It was impressive to see him in there tonight; it seems like he’s getting younger and younger. Tymoschuk—we still have a ways to go to get to a player at that level.”
What We Heard: “Toronto over AS Roma? Really?” What Klinsmann Said About Only Having One MLS Player: “Definitely if you don’t have your main group together – and it’s a mix between MLS players, European players and Mexican players – then there’s a bit of drop in quality that’s just natural, it’s just normal. That’s why our job at the end of the day is to zoom in and name 23 guys who are up to the task for the World Cup.
What We Heard: “Toronto!?!??”

What Klinsmann Said About Jozy Altidore’s Club Form: “Well for every player you just wish they get into a rhythm. For a player who sits on the bench and doesn’t get the games he needs, also for a striker who needs opportunities to score goals when you go towards the biggest competition in the world, yes, you think about that. You hope that the situation he gets to play again, breaks in, and scores goals. At the end of the day we can’t influence everyone’s situation on the club level. We can follow it, we can talk to the players, we can talk to the coaches as well, but at the end of the day the players have to solve it. It is very important that our players get into a rhythm for the next 10-12 weeks.”
What We Heard: “It’s hard to score when you only touch the ball 25 yards from goal.” What Klinsmann Said About Ukraine’s Wingers: “It’s definitely good for our full backs playing against high-caliber wingers and these two tonight are top class wingers. They showed that also in World Cup Qualifying, especially against France. So, every game you can have, in this case Ed Castillo and Geoff Cameron, has a lot of worth. This is what they take with them, if they go to the World Cup against another level. It will be very helpful.” What We Heard: "Cameron in, Castillo out." That’s what we heard. What did you hear? Tell us in the Comments section below.