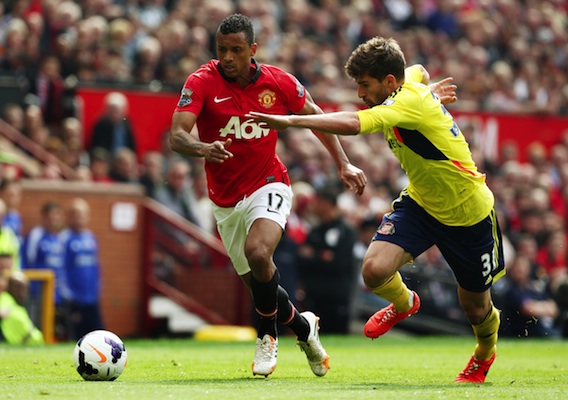 In part two in a recurring series, ASN’s Blake Thomsen sizes up the current form of Portugal’s World Cup squad. Don’t know much about, say, William Carvalho? That will change here.
BY Blake Thomsen Posted
May 29, 2014
12:26 PM
PORTUGAL'S KEY PLAYERS are a bit all over the place as they enter the World Cup. There’s plenty of heat (and no, we’re not talking about Cristiano Ronaldo’s nude magazine cover) but also plenty of strugglers. Here, ASN recaps everything you need to know about the men the U.S. will face on June 22 in Manaus.

William Carvalho—defensive midfielder, Sporting Lisbon
There are few hotter properties in world football, let alone Group G, than defensive midfielder William Carvalho. After a hugely impressive campaign for Sporting, the 22-year-old has drawn admiring glances from many of Europe’s biggest clubs. Manchester United look like the favorites to sign him this summer for a fee that will likely surpass $50 million. Carvalho’s rise has reaped rewards at the international level as well, and all indications are that he has supplanted longtime starter Miguel Veloso in Portugal’s preferred XI. With his rare combination of physicality and comfort on the ball, he’ll present a unique challenge for Michael Bradley and Jermaine Jones in the center of the pitch.
Heat Index: Manaus Cristiano Ronaldo—winger, Real Madrid
By his own obscene standards, Ronaldo is merely playing at an ordinary level as the World Cup approaches. Nagging injuries seem to have taken a minor toll, and it’s safe to say that Ronaldo looked positively average (and perhaps a bit tired) against Atletico Madrid in last weekend’s Champions League final. Alejandro Bedoya confirmed as much in saying, “If I’m going to be honest, I don’t think he had his best game.” Still, you’d have to be insane to discount the world’s best player, who even amidst a period of “average” form still managed nine goals in his last 10 games for Real. Freed from the grind of Real Madrid’s bid for domestic and continental glory over the next few weeks, there’s no reason to think Ronaldo won’t be sufficiently fresh in Brazil. That is bad news for the U.S.—and for Ghana and Germany as well.
Heat Index: Magazine cover with supermodel girlfriend Irina Shayk
Fabio Coentrao—left back, Real Madrid
Coentrao deserves immense credit for working his way back into the Real side and playing a big role in delivering the Spanish club’s 10th European Cup. The left back looked as good as gone in January when he couldn’t even make the bench for most matches, but he worked his way back into Carlo Ancelotti’s good graces and now enters the World Cup in a rich vein of form. Though capable going forward, Coentrao will need to be at his best defensively to cope with the nonexistent defensive discipline of Ronaldo. Whether via Graham Zusi or Bedoya, the U.S. may see Coentrao’s spot as a space to exploit, even though the left back has been in terrific form.
Heat Index: Hot, but potentially cooled by the right tactics

Silvestre Varela—winger, Porto
The athletic Varela has perhaps never developed into the player many hoped he would be, but that’s not to say he can’t make a big-time impact for Portugal. He comes into the World Cup on the heels of a pretty standard season for Porto, scoring 10 times, including twice in his last six games. Varela is unlikely to start, but if Portugal needs a goal late, he’s one of Paulo Bento’s most trusted options. His late winner against Denmark in Euro 2012 shows what he is capable of. The air kick that preceded the unstoppable finish is a somewhat fitting encapsulation of Varela’s game—unpredictable, but often marked by moments of genuine quality. He likely won’t get more than 20-minute cameos in Brazil, but it’s a role that Varela is well accustomed to, and it’s enough time for him to be quite dangerous.
Heat Index: Lukewarm Rafa Silva—winger, Braga
Rafa Silva's inclusion in Portugal's squad has a bit of a DeAndre Yedlin feel to it. Much like the Sounders right back, he's young, largely untested, and fast as lightning. Silva comes into the World Cup in mediocre form, but it seems that he's on the plane because he can run, not because of his four goals over the last five months. With Varela in his way as a wing substitute, it's quite possible that Silva doesn't see any playing time in Brazil. But Paulo Bento will enjoy having him in his back pocket, just in case.
Heat Index: Medium Hugo Almeida—striker, Besiktas
Even at an advanced age, target man Hugo Almeida is still a serviceable player, though likely not a starter in Brazil. He is jarringly slow for an international forward, but he is impressive in the air and a decent finisher on his day (the below clip shows 11 of his 13 goals for Besiktas this year). Almeida comes into the World Cup in poor form, though. Hilariously, his midseason run of seven goals in nine games ended abruptly in February once Jermaine Jones joined him at Besiktas. Was Jones sabotaging his future opponent’s ability to score, seeking to drain his confidence ahead of the World Cup? Almost certainly. OK not really, but it’s still fun to speculate as to why Almeida limped to the finish line with only one goal in his last 12 matches. That kind of form will not exactly inspire confidence in a player who is notoriously unvalued in his home country. Heat Index: Probably warmer now that he’s free from Jermaine Jones’ Jedi mind tricks Joao Moutinho—attacking central midfielder, Monaco
Joao Moutinho is Portugal’s resident second-best player, but he hasn’t quite been playing like it. He enters the World Cup on the heels of a very mediocre first season for big-spending Monaco. Moutinho’s game has never been about goals, but a return of just one all season and none since September does not bode particularly well for his scoring prospects in Brazil. Still, Moutinho’s telepathic connection with Ronaldo and penchant for delivering quality set pieces means he can never be discounted. Ronaldo stole the headlines with an otherworldly hat trick in the qualifying playoffs against Sweden, but it was two killer Moutinho through balls that helped him do most of his damage. Given his passing quality, it’s no surprise that even in a down season, Moutinho finished tied for seventh in the Ligue 1 assist charts.
Heat Index: Cool, but likely warmed up by the presence of Ronaldo

Helder Postiga—striker, Lazio
The Portuguese soccer community is infamously skeptical of its strikers, and projected starter Helder Postiga did not help matters by scoring precisely zero goals following a January move to Lazio. The 31-year-old brings decent holdup play and work rate, but at this point it will be far more surprising if he finds the net in Brazil than if he doesn’t. Predictably, the scoring onus will fall on Ronaldo. If Postiga is unable to score himself, it will be of utmost importance that he at least helps create chances for his more potent teammate.
Heat Index: In the FroZone Raul Meireles—central midfielder, Fenerbahce
It’s probably fair to say that Raul Meireles falls into the "past their prime central midfielders" club that's led by his former Chelsea teammate (and Ghana opponent) Michael Essien. Meireles was once known for an irrepressible work rate and a penchant for scoring extraordinary goals, like this outrageous volley for Liverpool from a few years back. In recent years, though, he has slipped into relative anonymity in the Turkish league, leaving much to be desired from a scoring and work rate standpoint. He tallied just one goal for Fenerbahce over the past nine months and didn't look nearly as dynamic as he once did for Chelsea and Liverpool. With all of this said, there's still plenty of quality in Meireles' right boot. He's capable of impressive moments—it’s just that those moments are becoming more and more rare. The U.S. will hope that one of those moments doesn’t come on June 22.
Heat Index: Nearing Michael Essien territory Nani—winger, Manchester United
Nani’s stunning fall from grace over the past few years has been as comprehensive as it’s been perplexing. Just three years ago, he dazzled the Premier League on a title-winning United side, picking up nine league goals and 18 (!) assists in the league alone. His efforts justifiably earned him United’s Player of the Season. Nani’s 2011-12 campaign was also impressive, with eight goals and 11 more assists in the league. World domination, or at least world-class status, looked imminent for the then 25-year-old sensation. Then the unthinkable happened. Sometime in the summer of 2012, it seems that Nani forgot how to play football. He managed a whopping one league goal and two assists in 2012-13, and followed that up with a Stewart Downing-esque no goal, no assist showing this season. Shockingly, he’s still a virtual guarantee to start for Portugal at right wing. The U.S. will need to capitalize on his presence on the pitch, both in terms of his limited offensive impact and his severe defensive shortcomings.
Heat Index: Absolute zero How do you feel about this Portugal squad with the June 22 matchup drawing close? Aside from Ronaldo, who is most likely to hurt the U.S.? Let us know in the comments section below. Blake Thomsen is a frequent ASN contributor. You really should follow him on Twitter.