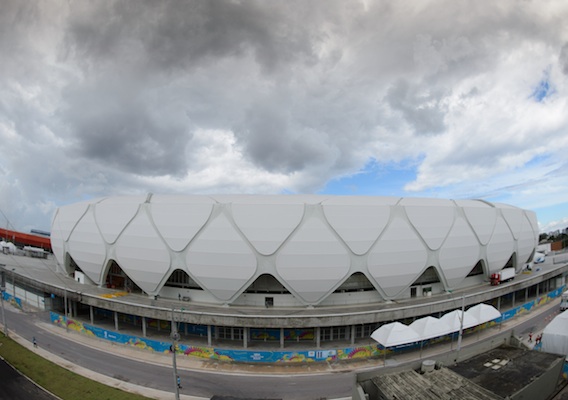 Portugal Could Be Missing Five Starters Against U.S.

Pepe, Fabio Coentrao, Hugo Almeida, and Rui Patricio are already out for Sunday's Group G clash, and Portugal coach Paolo Bento said another defender could miss the contest as well.
BY John Godfrey Posted
June 21, 2014
7:26 PM
MANAUS, Brazil—Meteorologically speaking, Sao Paolo and this city of nearly two million in the heart of the Amazon basin could not be more dissimilar. It's been cool and overcast and very London-like the past few days in Sao Paolo, where the U.S. Soccer Federation set up its base camp for the 2014 World Cup. The team arrived in Manaus Friday night; I arrived early Saturday afternoon. When I got off the plane at Manaus' Eduardo Gomes International Airport, I could feel the heat and humidity slam into my face before I was two steps down the jetway. If this is how it feels when I'm partially indoors, I thought, how bad is it going to be out under the glaring sun? How brutal will it be for the players who have to run for 90 minutes and throw their bodies against one another with World Cup glory on the line? I was writing the story in my head as I walked toward the media bus when I realized I was allowing myself to get worked up over nothing. Again. Haven't we already seen this movie? Just last week a majority of media outlets were obsessing over the potential for rain in Natal, the fear of high winds, a waterlogged field. Who would benefit from monsoon-like conditions? None of it happened. The weather was great and the game was a cracker and it was a whole lot of hand-wringing over nothing. So here's what I have to say about the potential for bad weather on Sunday: Who cares? It may rain. It may not. It will be humid. The temperature will be 80-something when the match kicks off at 6 p.m local time. The sun could make an appearance. There could be rainbows, too, and dancing unicorns. But none of it is worth discussing at this point. Both teams will have to deal with the elements. There's nothing to see here, folks. Let's move along.

THE BIGGEST STORY ahead of tomorrow's match is Portugal's rapidly dwindling roster. Fearsome central defender Pepe is suspended for his rash headbutt in the match against Germany. Left back Fabio Coentrao and striker Hugo Almeida suffered leg injuries in the Group G opener and will miss the U.S. match as well. And then first-choice goalkeeper Rui Patricio pulled up lame—he's out too. Today, Portugal coach Paolo Bento told reporters about another injury concern: "At the moment we have four players who will not be playing tomorrow," Bento said referring to the above-mentioned athletes. "Secondly, there's a possibility of having another absence, and I'm talking about Bruno—who will not be training today." Bruno Alves, the central defender who plays for Fenerbahce in Turkey and has made 73 appearances for Portugal since 2007, is questionable. That would mean that four-fifths of Portugal's preferred defensive corps—goalkeeper included—could miss the match. "This group has seen difficult times before and we've been able to overcome them," Bento said. "The players know what they have to do. They know what the opponent does, and we can't be worried about other things." Though he was given the opportunity to do so, Bento did not dismiss the threat posed by the United States. "Our competition are very talented, very good," he said. "They are competitive players, intense players. What we tried to do jointly is analyze the U.S.—how they play, their strong points, their weak points. "In the current football, anything can happen. There are no favorites anymore." The coach referenced Argentina's narrow 1-0 victory over Iran on Saturday to make his point. "It's yet another example. In the current football there are no easy games. Argentina beat Iran at 90 minutes. All games are difficult. We don't worry about the others. We have to worry about ourselves." And a tie, according to Bento, won't hack it for Portugal. "Either we win, or we start packing our suitcases." John Godfrey is the founder and editor in chief of American Soccer Now.