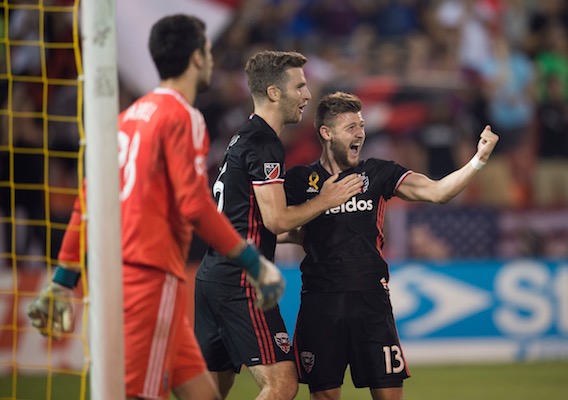 Paul Arriola Made a Change, Now Seeks a Bigger Role

The 22-year-old winger changed countries and leagues over the summer, swapping a familiar environment at Club Tijuana for an opportunity to take a leadership role at D.C. United.
BY Brian Sciaretta Posted
September 28, 2017
8:35 AM

GIVE PAUL ARRIOLA CREDIT: He’s not afraid to mix things up.

A few months ago Arriola was a part-time player for Club Tijuana, one of the top teams in Liga MX. In an effort to secure more playing time, however, the California native moved to D.C. United—one of the worst teams in Major League Soccer.

Why did he move to a struggling team in a lesser league? Arriola wants to be an impact player—the sort of athlete who is expected to carry the load for his team on a regular basis.

And while D.C. United is stuck in the cellar of MLS’ Eastern Conference, Arriola looks to the club’s future—including a new stadium debuting in 2018—and likes what he sees.

"It’s exciting,” Arriola told American Soccer Now. “When the club is playing young players and you're the one that is constantly on the field and constantly there to help the team, it's going to force you to grow up and force you to become consistent. I had to do that a little bit last year with Tijuana once I emerged as a starter but still the role wasn't too big for me. It is a reason that made me really want to come here.

“For me to be able to come to a team where I have to be a contributor, I think it's a great step in my career—being a guy that is expected to help the team win and constantly having good games. I came here to get better. It's definitely a challenge.”

The next few months will certainly be challenging for Arriola. D.C. United will miss the MLS postseason, and that means Arriola will not have any club games from November to March. In the remaining four games of the 2017 campaign, Arriola hopes to end the season on a winning note and create some momentum for 2018.

D.C. United has four wins, three losses, and a draw since Arriola arrived and he is still trying to find a way to boost the club’s offensive production. He believes it will come with time as the new and younger players grow into the team, but still it has been frustrating for him.

“Off the field and training-wise it's been a great transition,” Arriola said. “The guys have been great. I came from a place in Mexico where the guys, at times, you would feel there were different groups within the team. As soon as I got to D.C., there weren't any groups. The guys are willing to work hard for each other.”

“Talking about the transition on the field it has been tough so far. I am still trying to get used to my teammates and what the coaching staff wants. Obviously my teammates have to adjust to not only my style of play, but also the other new signings. We hadn't scored many goals before I got here, and now that I am here we're still not scoring many goals. That has been the frustrating part of it because we were brought here to make things happen. Over time, that will happen.”

Arriola has drawn plenty of attention from opposing MLS clubs—something he welcomes.

“It's definitely more physical and there are more athletes here,” Arriola said when asked to compare Liga MX to MLS. “The other thing I've noticed over the games, when I was in Liga MX I was never a player that was talked about much by the opposing team. I don't think the game plan was, ‘Let's take Paul Arriola out of the game.'

“Here I am getting followed around. The left back is always on my tail. He doesn't want to let me turn. They're really physical. It's something that I am not used to. [Before] I was able to catch people by surprise. It has been hard for me to find times to go 1v1 like I've been used to the past four years. That is a great challenge for me and I have to get used to it.”

Despite his early struggles, there are some encouraging signs. On Saturday, Arriola had his best game for D.C. United, notching two high-quality assists in a 4-0 win over San Jose.

This assist from Paul Arriola is class. #USMNT https://t.co/y9quNps3yl

Over the summer, when it appeared that Arriola was going to leave Tijuana, there was speculation that he might join the ranks of the growing number of young Americans playing abroad. Arriola admits that the World Cup was on his mind when he decided to play in MLS. While he is very happy with D.C., he is ambitious and Europe could very well be an option at some point—with a 2018 World Cup showing potentially boosting his stock.

“For a lot of players it's a dream to play overseas,” Arriola said. “At the moment it didn't seem right. We qualify for the World Cup, and then we have six months. I could have gone to a team that maybe I would have been a big player for or maybe have been a rotational player or a player the club is just happy to have around. I know there were a few clubs that could have taken me on loan. But if I go on loan, who knows the importance the club feels to play me?

“D.C. is a very open organization and they told me as soon as I got here if I wanted to go to Europe and everything seems right financially, they would be understanding that I have other goals as well. For the moment, I am a D.C. United player and I am excited to be here. But who knows in a year, or two, or three, or never? But if the opportunity was right and the situation was right, I would definitely go.”

Of course, D.C. United is only part of the story for Arriola right now. The U.S. national team is seeking to qualify for the World Cup and needs results in the final two games of the Hexagonal. September was a major setback for the team’s position after taking just one point out of a possible six. Despite the poor run, Arriola performed well off the bench in the 1-1 draw with Hondruas as he brought life into the U.S. attack.

Arriola doesn’t need reminders either about the pressure. He recalls recently watching television with his fiancé and hearing Alexi Lalas rip the national team to shreds after the recent qualifiers.

“I didn't expect to hear it from Lalas—a guy who has been through it in CONCACAF and knows what it is like and how difficult these games can be,” Arriola said. “But in the end, we didn't perform the way we should. At least he cares. Whether he did it for himself or to motivate some other players, it doesn't matter too much.”

“If he wants to have an interview in a few weeks,” Arriola said with a laugh, “that could be something interesting.”

The October qualifiers will be interesting too. Despite the United States’ disappointing showing in September, the point earned in Honduras allows the team to control its own destiny.

“Everyone is going to be ready to play,” Arriola said. ?We all know what's at stake and the pressure is definitely on.”