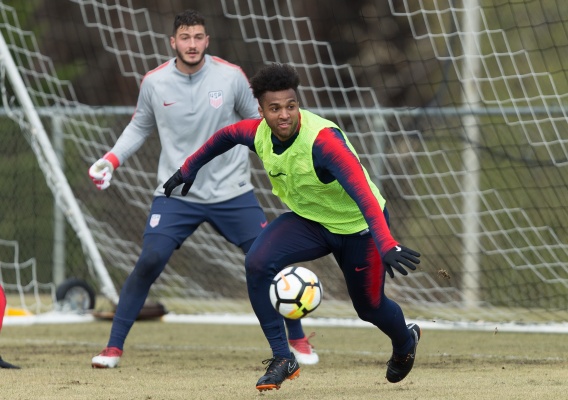 On loan at Kortrijk, Manchester City's Erik Palmer-Brown is part of a rising generation that believes it can help the national team reverse course and bring it to a global standard. The first step will be his debut - likely in the upcoming friendlies against Bolivia, Ireland, and France.
BY Brian Sciaretta Posted
May 16, 2018
3:00 AM
THIS FRIDAY, Erik Palmer-Brown will likely play in what will be his final game for Kortrijk when the small Belgian club visits Waasland-Beveren to conclude its season. On loan from Manchester City, Palmer-Brown is heading into an uncertain offseason where he doesn’t yet know where he will be playing next.

Last fall, Palmer-Brown inked a long-term deal with Manchester City as his contract with Sporting Kansas City drew to a close. The first years in a player’s career are often the most difficult and for the Kansas City native, it is no exception.

The past few years for Palmer-Brown, 21, have been nomadic. He spent the entire calendar year of 2016 on loan to Porto where he helped its second team win the Segunda division title. After talks to make the Portugal move permanent broke down, he spent 2017 with Sporting Kansas City while also serving as captain for the U.S. U-20 World Cup team.

Now with Manchester City, a series of loans is likely in the foreseeable future as he is both a ways from being ready to play for the Premier League champions and from being qualified to secure a U.K. work permit. For many, the uncertainty of one’s club situation would be hard. For the laid-back Palmer-Brown, he is okay with it.

“It's different,” Palmer-Brown told ASN from Kortrijk. “I'm actually packing up right now only because I am not sure of the future. For me, mentally, I've always been a guy to go with the flow. I'm a late decision maker and my mom has always been on me because I don't plan. For me, I don't think it's mentally challenging. The worst part about it is when people ask me what I am doing next and I am like: I don't know.”

But whatever is next for Palmer-Brown, the experience at Kortrijk was a positive one. Should he start on Friday, he will finish with 10 appearance while eclipsing the 700 minute mark. That alone should give him a good springboard into the preseason at his next club.

Getting adjusted wasn’t easy as he joined the club midseason and admits that he was behind with fitness. To get caught up, he spent time individually running before and after training. Off the field he came to enjoy Belgium and had an easier time adjusting to the culture than he did in Portugal where fewer people spoke English and he was frequently homesick.

But Kortrijk is a small club in Belgium and that was far different than what he is used to.

“It's different,” Palmer-Brown explained. “In a way I've been sheltered with the luck I've had and the clubs I've been to. With everything, the facilities have been great, I've been blessed to be at Sporting Kansas City, Porto, and Manchester City for a short period. Coming to Kortrijk, I kind of woke up. Our facilities aren't great and our pitches weren't the best. After the spring season, the rain kind of beat up our pitches. Coming over here was a little tough to adapt at first... But I got used to it quick. I'm not a guy to harp on that. It was kind of just a shocking moment for me to realize how good I had it.”

“But the adaption to living in Europe went smoothly for me,” he continued. “That's not to say I don't get homesick at times now but since I'm older and I made the decision to come over, it was a little easier on me. My mind is set on being over here and playing games.”

Despite how small Kortrijk is, Palmer-Brown maintains frequent contact with his parent club, Manchester City, which is one of the biggest clubs in the world. Similar to other big clubs like Chelsea, which frequently acquires young players and sends them out on loan, Manchester City has a loan team within its organization that closely monitors the progress of its players at other teams.

The result is that Palmer-Brown never feels distant from the operations of his team.

“I am just blessed to be at a club like Manchester City with all their resources and their loan team that is contacting me every few days,” Palmer-Brown said. “They come out to every other game and send me clips right after every game. It is crazy how quickly they get to you and get stuff to you. I think it's awesome.”

On the international level, it is also an important period for Palmer-Brown’s career. In March he earned his first national team call-up but went as an unused substitute in a 1-0 win over Paraguay. He is expected to be named to the roster for the team’s upcoming three friendlies against Bolivia, Ireland, and France. Now with a full slate of games at the club level, he will be in better position at the start of camp.

Starting with the players from the 1995 birth year, Palmer-Brown is part of a generation he believes will elevate American soccer both domestically, abroad, and with the national team. While there is optimism for every generation, this group of players has two starters for Champions League teams, an impressive core of central defenders, and quality midfielders who are all starters for their clubs.

It is also a close-knit group. Palmer-Brown is a regular at playing Playstation with Pulisic and Tyler Adams is one of the players he admires most, saying that he didn’t know Adams well before the start of 2017 U-20 World Cup qualifying but after the tournament when asked who was the best player he was playing with, the answer was Tyler Adams (he added: “for his age, his leadership ability and the way he conducts himself on the field is just unbelievable. If he's on your team, you know you have someone you want to follow and you just know he's going to kill himself and the other team every game”).

In particular, however, the central defense core stands out with this group. The last two U-20 World Cup teams have produced what could be the backbone of the team’s defense for many years to come with players such as Palmer-Brown, Cameron Carter-Vickers, Matt Miazga, Justen Glad, and Auston Trusty.

The competition within this group is friendly but intense. They watch each other’s games on a regular basis and Palmer-Brown believes it forces them to elevate their games or else run the risk of falling behind.

“Justen, Matt, Cameron, Trusty, we're all friends first and then teammates,” Palmer-Brown explained. “Justen was my roommate at residency and Cameron at the World Cup. We all have fun with each other but when we step out on the pitch, it's competition. I mean John Brooks is only 24. Matt Miazga has been playing amazing at Vitesse - captaining the team and scoring the other day. You watch your friends play - and I really want them all to do well - it makes you want to raise your game to push them and yourself.”

Of course, this is a dark period for the U.S. national team. The failure to make the World Cup sent shockwaves and with the tournament fast approaching, the wounds are being reopened. But the upcoming friendlies could offer a glimpse of the future. In under two months, the World Cup will be over and all national teams will have a fresh slate.

Even without a permanent coach and general manager, Palmer-Brown remains optimistic, having played with most of the players who will be part of the team’s future.

“With this next group coming up, and I’ve said it for a while, the 95s and younger - this is the generation that could turn the page,” Palmer-Brown said. “We're getting our opportunity now and we have to take advantage of it. It starts with the Olympics, and we have to qualify, and then for the full national team. For the Olympics, the big thing is to qualify and for those of us in Europe, it will be hard to get released. But we have so much depth and I have so much confidence in all of the guy's abilities.”

“For us young guys coming in, we are here to make an impression that we're here to play good football,” he continued. “We want other countries around the world to know that America is going to be one of the top teams. That's our goal as a group of youngsters.”