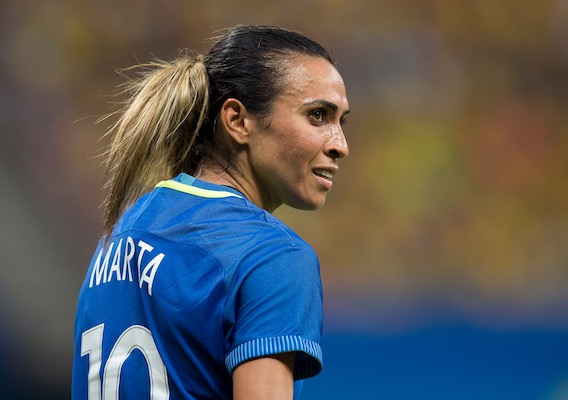 Some big-name stars have moved overseas but a new TV deal with Lifetime, an expanded schedule, and a big bump in player salaries have put wind in the sails of the National Women's Soccer League.
BY John D. Halloran Posted
April 11, 2017
10:20 AM

WHEN THE WESTERN NEW YORK FLASH defeated the Washington Spirit in penalties last October to win the 2016 National Women’s Soccer League title, another chapter in the history of women’s professional soccer came to a close. The thrilling championship game in Houston proved to be an appropriate ending to the record-setting season, one that nearly everyone involved branded a success.

With a history mired in fits and starts, the NWSL has taken women’s soccer where no American league has gone before. The Women’s United Soccer Association opened to great fanfare in 2001, before shuttering its doors three years later, while Women’s Professional Soccer suffered the same fate in the same time span.

Accordingly, when the NWSL opened play in 2013, many viewed its viability with skepticism and the league took cautious, often painfully slow, steps forward.

My blog on the state of the @NWSL. It MUST get better. https://t.co/YgS0ppa4Bm

Many fans began to wonder when the league would finally step out of the footprint of the previous failures to establish a viable women’s league and begin to embrace bigger, and bolder, steps forward.

Now, six months later and on the cusp of the 2017 season, the NWSL has answered many of those questions with a slew of off-season breakthroughs that have the league poised to make major progress in season five.

First, and perhaps most importantly, the NWSL will double its minimum salary in 2017, moving the bottom end of the pay scale from $7,200 to $15,000. And while it still isn’t enough to allow players at the bottom end of the pay scale to be fully professional, combined with other sources of income (many players work as coaches or clinicians, receive endorsement deals, or go on loan abroad during the NWSL offseason), players on the lower end of the league’s pay scale are now much closer to earning a living wage.

In addition, FC Kansas City midfielder Yael Averbuch announced in January the formation of a players’ association for non-national team members to communicate potential issues with the league in a unified and formal manner.

In response, former league commissioner Jeff Plush (who stepped down last month), told American Soccer Now in January that the players had the prerogative to form such an association and added that it was the NWSL’s “responsibility to make sure that we’re doing everything we can as a league and as clubs to operate at a high level and give [players] the level of support and comfort that they need.”

The NWSL also received a major improvement to its TV deal this winter, with A&E purchasing an equity stake in the league and committing to a national broadcast of one game per week on the Lifetime network for the next three years. This new arrangement dwarf’s the league’s previous deal with Fox, which broadcast only three regular season games in 2016.

Some have voiced concern that placing the NWSL’s weekly game on Lifetime—a “woman’s network”—will reduce its visibility to casual fans. Still, it’s hard not to see the move to weekly, nationally televised games as anything other than a major victory for the league.

I share concerns re: targeting women broadly vs. targeting soccer fans. But Lifetime’s in 80% of houses w/ a TV (few networks reach more).

The television deal also included an announcement that all non-televised matches will be streamed in high-definition—a major improvement compared to the vast majority of streams in past seasons—and that A&E will be overseeing their production. Plush also confirmed at this year’s draft that streamed matches will continue to be free of charge for fans.

“We’re of the mindset of getting our content in front of as many eyeballs as possible. We’re still building a brand and telling a story,” said Plush.

In 2017, the NWSL will also be expanding its season by four matches, now surpassing the number of regular season games played in France’s Division 1 Feminine and Germany’s Frauen Bundesliga. In addition, the size of the league’s front office is expected to quadruple by the end of the year and many believe the league will add one or even two new franchises for the 2018 campaign.

Interest in the league is also growing rapidly with the total attendance in 2016 outpacing 2015’s numbers by more than 100,000 fans.

Total #NWSL attendance broken down by team each year. pic.twitter.com/VQ7sCYGR9h

Notwithstanding these impressive improvements, the NWSL does still face challenges in 2017.

Several major stars, including Alex Morgan, Carli Lloyd, Crystal Dunn, and Heather O’Reilly, have opted to skip all or part of the 2017 campaign and head to Europe. The league will need to prove itself sturdy enough to weather the absence of that star power.

However, the players themselves don’t seem worried about the moves.

“Ideally, we want to be the place where all the best players in the world want to play, but I think it's positive that we have an exchange with other countries where we are preparing players to be ready to go contribute overseas and vice-versa,” Averbuch told ASN in January.

NWSL fans also saw the “vice-versa” of that equation last week when the Orlando Pride announced it had signed five-time FIFA World Player of the Year Marta for the 2017 season.

In addition, superstars Sydney Leroux and Amy Rodriguez are returning in 2017 after missing last season due to pregnancies. Up-and-comers Lynn Williams and Kealia Ohai—who shared top scoring honors in 2016—will also be back this season, as well as established stars Christen Press, Ali Krieger, Becky Sauerbrunn, Tobin Heath, and Kelley O’Hara. U.S. fans also got a glimpse these past few weeks of star-in-the-making Rose Lavelle, who will be joining the Boston Breakers this season.

Another concern remains the lack of women in head coaching positions. Heading into year five, the Seattle Reign’s Laura Harvey remains the only woman head coach, and the most outspoken critic of the lack of women in leadership positions, former Chicago Red Stars general manager Alyse LaHue, has left the league entirely. Lahue publicly called on the league in 2016 to institute a National Football League style “Rooney Rule” which would require clubs to interview women candidates for open positions throughout the NWSL.

All 10 #NWSL coaches pose for a quick group photo before the 2017 #NWSLdraft starts. pic.twitter.com/x2u61mrlVU

The league has made some notable recent efforts in promoting women, recently hiring Amanda Duffy as the managing director of operations and putting Duffy front and center at January’s draft and February’s announcement of the new television deal. Washington also promoted assistant coach Denise Reddy this off-season into the role of technical director for the Spirit’s Maryland-based U.S. Soccer Development Academy.

Plush announced at the draft that the NWSL has been devoting resources to get more women into the coaching ranks and said that the league helped underwrite the cost of 100 players taking USSF’s E and F licensing courses last year. He also referenced the institution of a new policy that seemed to infer the NWSL had developed some form of a Rooney Rule, but the league failed to confirm as much to ASN.

“We’ve made it a priority for our clubs to make sure that they are interviewing a diverse pool of candidates, including minorities, including women,” said Plush. “We certainly would like to have more female head coaches in our league. We know that’s an opportunity for us and a priority and so we’ve instituted that policy.”

Despite these challenges, it’s hard to see this past offseason as anything other than a major win for the league. With improved salaries, an upgraded television deal, a longer schedule, a growing front office, and increasing attendance, the NWSL is in prime position to hit even new highs in 2017.