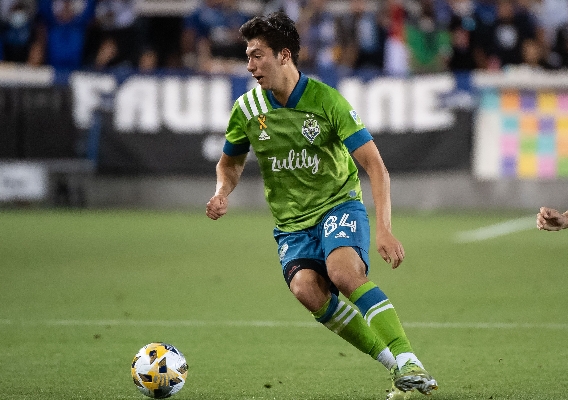 One of the top teenagers in MLS, Atencio looking to boost Seattle's stretch run

Josh Atencio has been given a lot of responsibilities in 2021 as a central midfielder for one of the biggest clubs in MLS. Now the Seattle native will be looking to be a key contributor in the stretch run and the playoffs. ASN's Brian Sciaretta spoke with the Bellevue, native about his growth as a player as well as his short and long-term ambitions.
BY Brian Sciaretta Posted
October 27, 2021
12:00 PM

THE SEATTLE SOUNDERS HAVE dealt with a load of challenges this year and this has been far different than years past. Jordan Morris has missed the entire season due to a torn ACL. Injuries have limited Nicholas Lodeiro to under 400 minutes so far, and Stefan Frei has also been sidelined for a long stretch. For the league’s best team over the past decade, the formula for success has been tested.

Entering into this weekend, Seattle still sits among the best teams in the league despite a recent four-game winless stretch and Brian Schmetzer’s team remains in the mix for the best overall record in the Western Conference.

Part of the way the team has been able to continue to win has been the positive contributions from young players from within its own academy. In addition to the veteran leaders, young players have been given minutes and become reliable performers.

Josh Atencio, 19, has been the biggest addition from within the team’s own academy this season. The Bellevue, Washington has made 17 starts and 23 appearances for the Sounders’ first team and he has looked more than ready to handle the responsibilities in central midfield for one of the league’s biggest teams.

“It's a combination of guys that are willing to step up when they're given the opportunity and just the winning mentality that the club has had for so long now,” Atencio told ASN. “When you're going through the academy, they teach the kids that you have you have to win every game that you step into, every time you have an opportunity and a game and practice, anything - you're trying to win as much as possible. That mentality starts in us when we're young and it definitely translates up through every factor in the club. Every guy in that locker room wants to win every single game. It shows in the results.” 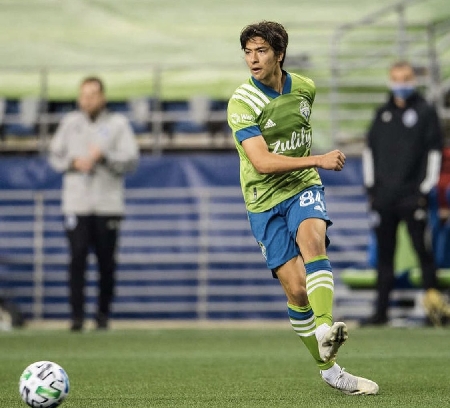 Atencio enjoys playing in his hometown, in front of huge crowds – often with family and friends present. But it was a challenging path to get to this point. After joining the Sounders academy in 2016, he moved onto the club’s USL team, the Tacoma Defiance, in 2018. Then in 2019, he finally inked a first-team homegrown contract with the Sounders.

In 2020, Atencio made his Sounders debut, but his six appearances were all cameos which totaled just 11 minutes. It hasn’t been until this season when he has been able to contribute in a meaningful way, starting regularly in the No. 6 or No. 8 positions. While he has played well on an individual basis, that has been most important is that he has helped the team continue its winning tradition – which he believes is rooted deeply in the team’s culture.

“I think the pathway is dialed in and honestly, the transition from the academy to the Defiance to the first team to being a contributor on the first team is about as good as possible and prepares the players about as best as they could possibly be prepared to help the team win games,” Atencio said.

“Back to the winning mentality and everything, everything from the top down in the club is super similar,” he added. “We're taught similar things that we're taught in first team training. We're taught those things from when we're 14 years old. We have a lot of time and opportunities to use what we've learned at different levels.”

Head coach Brian Schmetzer agrees that being surrounded in the Sounders culture has helped Atencio in his development.

“He’s only 19, so I wouldn’t call him a veteran yet. But certainly, he is showcasing his abilities in a good way,” Schmetzer said of Atencio. “I go back to the growth of 2020 and COVID being such a messed-up year. It actually was a great year for Josh because he was with us in our little bubble and I think he learned a lot. He was in that environment and he just kind of felt it and he kind of just took off.”

76' Atencio!!! The 17-year-old starts the play by winning back possession and finishes it off with a Cruyff turn and a goal! Fantastic debut for the @SoundersAcademy midfielder.

Atencio comes from a soccer family where most played the game at a high level  - often into college. Family pickup games were common, and everyone was surrounded by the sport. It was there where Atencio stood out and most realized he was different.

But his tight-knit family also has helped Atencio with his maturity, not just his soccer skill. The veterans of the Sounders are quick to point this out.

“What impresses me sometimes is when you have a young guy who kind of becomes the not young guy,” Seattle goalkeeper Stefan Frei said recently. “The way Josh plays right now and the confidence that he exudes is that of a senior player to me….It’s always really nice to see young guys prove you wrong, that they’re not so young. You almost absorb them as one of the veterans right away, and that makes it easier for the older guys, because you have one in your own ranks.”

The coming years will be transformative for Atencio. The upcoming playoff run will be demanding and there are expectations for Seattle to reverse its skid and go far in the playoff race – and Atencio will have to contribute to that effort. Also, like many American players of his generation, he hopes to make the move abroad and has attended youth national team camps previously with Gianluca Busio and Tanner Tessmann – both of whom recently were sold from MLS teams to Venezia in Serie A. 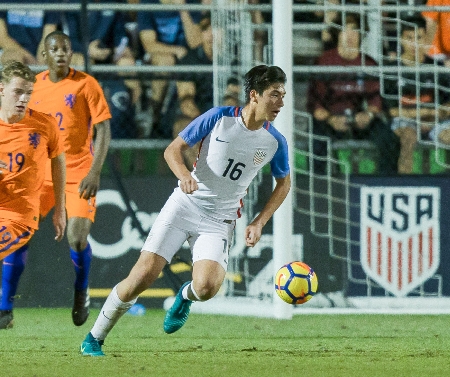 While 2020 was a difficult year for most people, it was especially hard on Atencio and players of his birth year. Atencio was expected to be in contention for a spot on the U.S. U-20 team but the U-20 World Cup was cancelled on Christmas Eve and it left many without the opportunity to play on a key international platform.

After not making the U.S. U-17 team, the U-20 team was expected to be a huge opportunity in 2021. With that gone, Atencio is focused on Seattle but will be eligible for the next U-23 team, but it will be up to the U.S. U-20 team to qualify for that tournament next summer. Atencio hopes to have that chance.

“The cancelation of the U-20 World Cup was the first time through covid that I actually like sat back and was like, wow, this sucks,” Atencio said. “I haven't been part of the youth national team scene for a couple of years now, but I was fortunate enough to be able to rep the badge more than a couple of times when I was younger. To be wearing the to be wearing red, white and blue when the national anthem is playing and, you're representing the country and you're getting experience playing against other nations who have like different nuances to the game. It's amazing. It really is.”