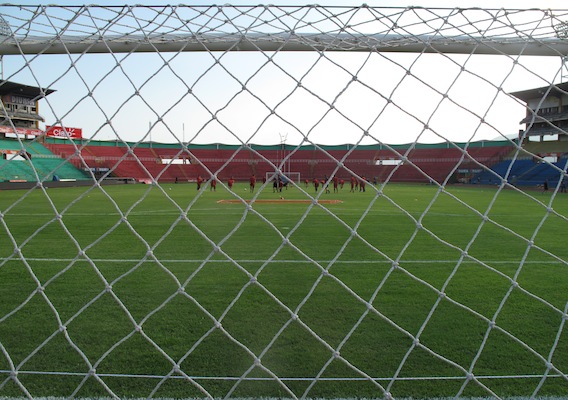 One Final Training Session Before the Game Goes Down

Geoff Cameron and Jozy Altidore weigh in on the difficulties of playing in Estadio Olimpico and the importance of getting out of the concrete behemoth with tres puntas. Plus: Photos!
ASN Slideshow

BY Noah Davis Posted
February 05, 2013
12:52 PM
SAN PEDRO SULA, Honduras—Geoff Cameron is a relative newcomer to the United States national team, but he doesn't sound intimidated by the potential sell-out crowd. "We know tomorrow's a big game for them and for us as well. They are making it a national holiday. The crowd behind them; everything in their favor. If we go out there with the attitude that we have had these last couple of months, especially with how we've played at home, if we bring that attitude and that determination that we've had down here, I think we'll be alright," one of the likely center back starters said before the Americans had their one training session on the Estadio Olimpico field. "It's a matter of matching their intensity [at the beginning of the game]." Jozy Altidore, who has been through the Hexagonal before, understands the need to get out of SPS with a W. "It's obviously important. What all the work's for comes down to tomorrow. It's important for us to have a good start. In these competitions you don't want to start off with zero points. Being at the top of the table is a huge mental edge. The biggest thing tomorrow is getting three points," the young American forward said. "In a competition like this, it's always one game at a time." (For what it's worth, the Honduran press is not at all confident that their team can produce a victory.) The game-time temperature is expected to be around 90 degrees with a high level of humidity. For at least one player, however, the atmosphere feels familiar. "It's Houston, man, I don't mind," Cameron said, jokingly lamenting the fact that he's lost his tan since transferring to Stoke. "I enjoy the humidity. I'm used to it." ASN deputy editor Noah Davis is covering the United States-Honduras match from SPS.