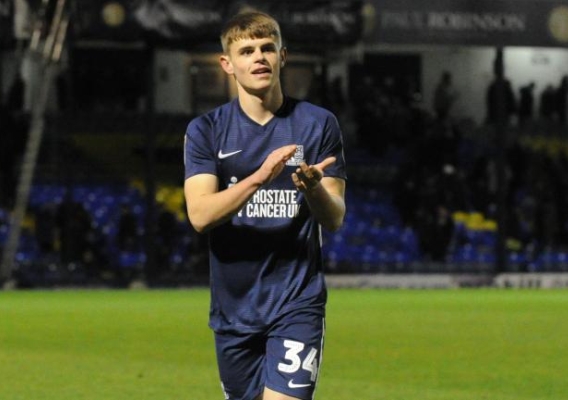 On the rise with Southend United, Kelman eyes top goal with U.S. U-20's

Charlie Kelman is now playing first team soccer for Southend United. After scoring a wonder goal in January, the teenager seems set to take on more club responsibilities - which he hopes leads to his top goal at the moment: earning a spot on the U.S. U-20 World Cup roster.
BY Brian Sciaretta Posted
February 27, 2019
2:00 PM
DURING HIS DAYS at the youth level, Charlie Kelman could score goals at a staggering rate. Then within minutes of his professional debut for Southend United, he scored a wonder goal from within his own half. But the English-born American wants to continue his momentum and has ambitious goals in the months ahead.

Kelman, 17, was a born goal scorer. During the 2017/18 season for the youth team of third-tier, League One’s Southend United, he scored 61 goals (along with 22 this year in limited youth action). Since January, he’s been promoted to the first team.

“It's been quite surreal,” Kelman told ASN from England about his transition to the first team. “The standard goes up and it’s intense. It's very different playing in front of crowds and playing for results instead of trying to develop. When I stepped on the pitch for my debut, I didn't know what to expect. But after having a few touches, the crowd was getting behind me and it came down to me showing the crowd what I could do. Obviously, I scored the goal.”

That goal, of course, is still being talked about. It was recently named League One’s goal of the month and it came on January 12th.


? KELMAN WINS GOAL OF THE MONTH ?

Southend starlet Charlie Kelman has won the @SkyBet League One Goal of the Month award for January.

See his stunning winning strike from inside his own half here: https://t.co/nRQLvMdlYG pic.twitter.com/KXIz5KjLT9

Kelman was subbed when Southend was trailing Plymouth Argyle 3-1. Kelman scored his amazing goal in stoppage time to bring his club within one, but the equalizer never came. Despite the loss, the goal was the story from the game.

“It quite a negative atmosphere but [my coach] gave me the call to go in,” Kelman recalled. “The keeper was always off his line. I was standing there with Simon Cox and I told him the next time I get the ball, I am going to have a shot. The ball just fell to me and as soon as I hit it, I knew it was in. It was kind of just an instinct. I didn't really think about it, I just hit it. Next thing, I look up and the ball is in the back of the net.”

In the following weeks, Kelman has been a regular for Southend off the bench, has played well, and even signed a long-term professional contract with the club.  Next up could be a starting role as forward Stephen Humphrys is out with a broken nose and concussion - and Kelman could be next in line. This Saturday, the team will host second place Barnsley on national television.

Transfer rumors have also surfaced for Kelman, who is actually outperforming many of the English youth internationals who were part of the teams that won both the U-17 and U-20 World Cups in 2017. Kelman also became the first 2001-born player to score a professional goal in England.


???? | West Ham are among the teams being linked with a move to sign Southend youngster Charlie Kelman. #WHUFC https://t.co/heEblIcRvC pic.twitter.com/EQhu2D0qdA

Born in Basildon, England, he is the son of a Scottish-born father and an English mother. His father, however, moved to the United States, became a U.S. citizen and lived there long enough to pass citizenship onto Charlie. As a child, the younger Kelman lived with his father in Dallas from the ages of four through 10 and again for a year when he was 14.

When Kelman was living in the United States, his connection with the country grew even if his soccer relationship wasn’t always smooth. When he was very young, he played for FC Dallas and then he played again for the team when he came back as a teenager.

“I got told by one of the coaches that I wasn't good enough for the academy,” Kelman explained. “So I played for their Premier team and I think I scored 85 goals by Thanksgiving. I actually played against the Dallas academy team in my last game before going back to the UK and scored four goals in the Bobby Rhine Memorial Tournament Final while playing as a guest for Sporting United.   Academy manager Luchi Gonzalez called my Dad in after I left to congratulate him on my performance and to say that the door would always be open for me to return to the FC Dallas family at any time in the future, so I was naturally very pleased to see him recently named as the FC Dallas head coach."

“I used to watch FC Dallas a lot,” he added. “For me, I would be lying if I said I didn't want to play in MLS. It would be a dream for me to come over there and do that. I couldn't tell you at what point in my career. It would be a great experience.”

But Kelman’s international future is also up in the air at the moment. Last year, Kelman made his international debut when he was called up by the U.S. U-18 team after head coach Omid Namazi became aware of Kelman after Southend United reached out to him.

"I just found about a kid, Charlie Kelman, at Southend United who plays center forward." Namazi said in early 2018. "I was contacted by his club telling me that Charlie had an American passport and probably deserved to be seen. I asked to see a video and I've seen them now. He's a goal scorer. He's scored something like 27 goals in his league. It's not the greatest league but if you're scoring 27 goals, there is something there."

In June, Kelman was called up for a U.S. U-18 camp. At the time he was taking exams and his mom was there afterward to inform him he received his first international call-up.

“It was out of the blue,” Kelman said of learning of the call-up. “To be honest, it was all sort of surreal. It's something I dreamed of since I was a kid. A lot of the FC Dallas players used to be called up, like Thomas Roberts and a few others. Everyone always says that the United States is playing catch-up in football, but the camp when I went out there, the facilities, the structure - it seems as if they're not. It seems like they are becoming such a powerhouse. A lot of the young ones are coming over to Europe and really taking it by storm: Weston Mckennie, Timothy Weah, Josh Sargent, Christian Pulisic.”

“I haven't heard from anyone with the U.S. since my [U-18] call-up in June,” he added. “It's quite gutting, really. But I am thankful to everyone who called me up. Omid Namazi put me on the scene. But at the moment, I can play for England and Scotland as well. I've been contacted by both of those countries and they've come down to watch a few of my games. It's kind of who makes the first move, really.”

U.S. U-20 head coach Tab Ramos acknowledges that he has kept track of Kelman and pointed out how he saw his big goal in January.

“Of course, I did see it. I think that was an amazing goal - not just the fact he scored the goal but that he thought about it at the time,” Ramos said. “That is quick thinking. Not everybody is thinking that the keeper might be out. I really like that. Also, Charlie is a 2001 so he is also a potential next-cycle U-20 player. He is certainly in the picture as well.”

When asked about the U-20 World Cup, Kelman admits that it is perhaps his biggest goal at the moment even though he is yet to play at that age level for the United States. As a striker, Kelman’s competition on the U.S. U-20 team is tough but possible.

New England’s Justin Rennicks and Hannover’s Sebastian Soto were the main options the team’s run to the CONCACAF title with Rennicks starting in the win over Mexico in the final. FC Dallas forward Jesus Ferreira played last month in camp although is still awaiting his U.S. Citizenship. Then you also have potential, albeit unlikely, options of Tim Weah and Josh Sargent who are with the full national team right now.

While he is eligible for the 2021 U-20 team, his sole focus is on the current cycle. With the progress he’s shown in recent months, he is booming with confidence.

“The biggest goal for me is the U-20 World Cup,” Kelman said of his current goals. “It would be a huge honor. Tab Ramos keeps track of players and my job is to prove why I should be on the plane. I am quite young but I am the only American striker playing in the top four leagues in England. I am kind of trying to set a statement that I might be young but if you're good enough, your old enough.”

“I don't know, really,” he added on the 2021 U-20 cycle. “English football moves so quickly. In the next couple of years, you never know where you could be. I could be playing first team, or with the full national team. All I know is I am pushing and pushing because I want to play in May. I'll do anything I can to be involved.”