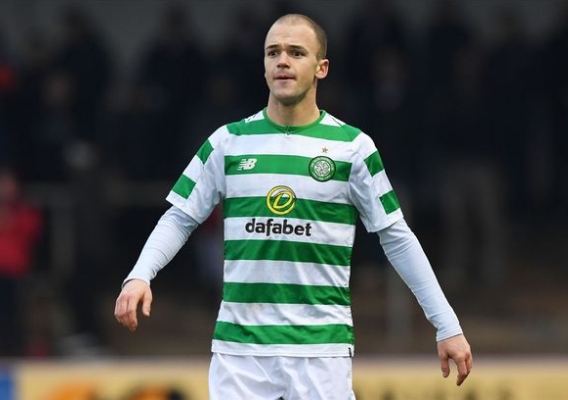 On loan at Charlotte, Gutman holds big ambitions with Celtic

Andrew Gutman's professional career got off to a wild start before he even played his first game. After trials at both Old Firm clubs, a Celtic deal, and a controversially botched loan, Gutman is finally ready to get the next phase of his career started.
BY Brian Sciaretta Posted
March 07, 2019
3:00 PM
THE WINTER transfer window is often a tough time for many players. Some players seal the deal on long awaited moves while other have potential transfers fall through and either return to their club or find a different move.

Andrew Gutman, 22, had one of the wildest winters an American player could have to kick off his career. After finishing his senior season with Indiana where he won the Hermann Trophy as the nation’s best collegiate player, the left back went on trials with both Old Firm clubs before electing to forgo a homegrown deal with the Chicago Fire and sign with Celtic FC.

But due to the difficulties of getting an U.K work permit, Gutman was originally loaned to Nashville SC of the USL. But with Nashville entering into MLS in 2020, his refusal to sign with Chicago made the league object and the loan was canceled. Soon after, he came to terms with another loan in the USL, this time to the Charlotte Independence.

But with all the turns along the way, Gutman says that his primary focus was always Celtic.

“I went on trial also with Rangers and both clubs were interested in me,” Gutman said. “Celtic is just a fantastic club and it has such a history in the biggest stages - the Champions League. I just decided in terms of my development and where I want to be with my goals that Celtic was the best path for me. So it was kind of a no-brainer.”

“I had work permit issues and I was able to come back to America and get a loan to Charlotte under Jim McGuinness who coached at Celtic for seven years,” he added. “For me it was an ideal situation. I had to go away from Celtic for a bit but at the same time, I still feel a part of it because the coach knows the Celtic way. I still feel like I am a part of Celtic and I can work to try to make it back to the first team there.”

Gutman grew up in the Chicago Fire academy and throughout his entire collegiate career there were always rumors that he was going to sign a homegrown contract. That never came, despite Gutman being widely considered one of the best players in the NCAA while also playing the coveted position of left back.

Following his final season, Gutman almost immediately went to Europe for trials. When the offers came in, Chicago was quickly out of the running. For Chicago, it was another major offseason setback which also saw Matt Polster sign for Rangers and Brandon Vincent retire at the age of 24.

“I grew up with Chicago,” Gutman explained. “I love that club and it's been a part of me for so long. It was a really tough decision to turn away from that club but I had to think about what I wanted long-term in my career and I think Celtic was the best situation for me. When a club like that comes calling, you really have to consider it.”

The Charlotte Independence will open its regular season on March 15 at home against Indy Eleven and that game should mark the start of Gutman’s professional career. As a 22 year old, Gutman is on the older side of American players starting their career. Over the past decade, the trend has been for players to either leave college very early or bypass it altogether for the professional ranks – either domestically or abroad. In that regard, Gutman is a throwback to a time when top domestic players stayed in college for three or even four seasons.

Gutman is aware of his late start by modern standards but believes it suited him best.

“For me, the three and a half years and Indiana was probably the best decision I could make,” Gutman discussed. “Because if I was truly honest with myself at 17, 18, 19, or even 20 years old, I don't think I was physically ready or mentally ready to be a professional. Those years at Indiana helped me develop a mentality that I really want to do this and then obviously I was able to build up my body. For me it was a great situation because I was honest with myself and I knew that if I left, I probably wouldn’t be successful as a professional. Everyone is different. You have guys like Josh Sargent and Tim Weah who go over right away and are successful, and that's great. You have to be true to yourself and not look at what other people are doing.”


Andrew Gutman races through the entire Maryland defense to deliver the @IndianaMSOC goal and give the Hoosiers a 1-0 lead over the Terps. #BTNStandout x @AutoOwnersIns pic.twitter.com/BIoI0zVetr

Charlotte is excited to have Gutman within its ranks as finding attacking left backs are hard to come by in any league and Gutman scored 20 goals in 90 games at Indiana (including perhaps the goal of the season against Maryland). Last season the club failed to make the USL playoffs and this year it will be looking to improve and generate excitement in a growing soccer market within the United States.

Jim McGuinness was hired as the club’s manager in December and he worked at Celtic in various capacities starting in 2012.

“It's absolutely fantastic to get Andrew,” McGuinness said. “He's everything that we're looking for, with his energy, his dynamic ability, and his attacking mentality. You want guys with a good attitude and a natural work ethic and I think he's got all those things.”

The incident with Nashville in January, however, is not a topic that Gutman wants to discuss after MLS, via the Chicago Fire, did not support his loan and thereby threw his career briefly into limbo.

“I don't really want to go into too much detail with that but it all worked out,” Gutman said. “I am in Charlotte and in a great situation. I am going to be able to get a lot of professional minutes and hopefully get back to Celtic as quickly as I can. That is my goal, no matter where I am.”

For now, Gutman is simply focused on Charlotte and Celtic with an eye towards returning to Scotland as soon as he is ready to help the club and secure his U.K. work permit. He is starting the season full of optimism and his trials with both Old Firm clubs gave him confidence that he is not far off from being at the level to compete at the top of the Scottish Premier League.

The transition to the professional ranks will be quick for Gutman but he sees a lot of opportunity in front of him having signed for a Champions League team while playing a position that many teams struggle to fill.

“I don't think I am too far off from the level of play after going over there,” Gutman said. “Europe is one of those things where everyone says it is such a higher level. I went over there and I thought I did pretty well. I had two successful trials. For me, I learned I could make a career there. There are a lot of things where I do need to improve. The biggest is my tactical awareness and the different styles of play vs. how I used to play in college.”

“I do understand my position is a sought-after position and that makes me work even harder because if I succeed, it opens even more doors like the national team or just prolonging my career. If you work hard, anything can happen.”