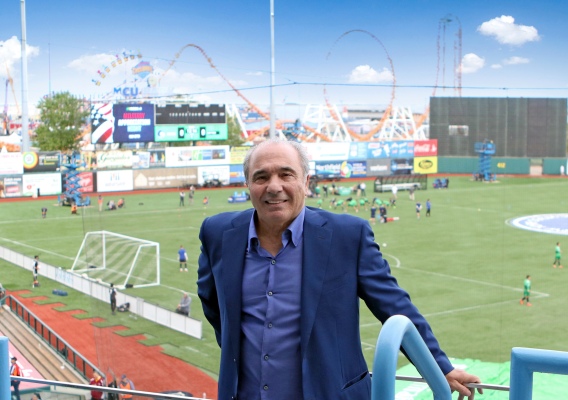 There is a new ASN 100 out today and that always starts a fun debate. What to make of the Rocco Commisso proposal? Not much. Elsewhere, Bob Bradley brings in another disgruntled player and Aron Johannsson is still MIA
BY Brian Sciaretta Posted
May 02, 2018
8:00 AM
IT IS HARD TO believe it is already May but as MLS enters midseason and European leagues wind down, a new ASN 100 is due. But there is all sorts of other news to catch up on


There is a new ASN 100 out today and you can read it here. And that always draws a big reaction and disagreements. Dig in


New York Cosmos chairman Rocco Commisso came forward with a huge proposal. In letters to U.S. Soccer, Commiso states “his willingness to personally invest $250 million to grow independent professional soccer in exchange for the Federation taking steps to protect his investment by providing a 10-year compliance runway for his league and strengthening its internal governance standards"

Commisso is angry about a lot of things and he believes that MLS, Soccer United Marketing, and U.S. Soccer are too close and that money is drained from U.S. Soccer and towards MLS and that the system is geared towards MLS at the expense of other soccer leagues such as the NASL – which suspended its 2018 season.

The problem for Commisso is that he doesn’t make a compelling case that U.S. Soccer’s recent disappointments on the men’s side is due to a lack of funding nor that the NASL is failing as a result of U.S. Soccer – as opposed to a lack of demand.

Over the past year, Commisso has shown himself to be very litigious and he has filed several lawsuits against all things MLS, SUM, and U.S. Soccer – among many things complaining about the standards required for Division 2 status (which he wants alleviated) and alleging an active plot by U.S. Soccer to destroy the NASL in favor of MLS.

He is right that the standards are different today than they were in the early days of MLS and that MLS wouldn’t comply with Division 1 standards today. Could U.S. Soccer be more flexible? Perhaps but standards are meant to evolve over time. Soccer is much further embedded into American culture now than in the early 1990’s.

It is hard to see U.S. Soccer going for Commisso’s proposal. At this point, it is hard to see why there wouldn’t be a complete lack of trust between U.S. Soccer and Commisso. Commisso likely knows this and this is the reason why he has gone so public with his proposal and has taken a more mild tone with it.

This proposal appears as if it was designed to give him something to complain about, or maybe even sue over, once it is rejected.


It is amazing that it took this long but the New England Revolution have finally traded disgruntled midfielder Lee Nguyen, 31, to LAFC which is quickly becoming the home of a number of players who have been outspokenly disappointed at previous clubs (Laurent Ciman, Benny Feilhaber, etc).

Bob Bradley is assembling a team of players that should be easy to motivate.


In February, FC Dallas and German giants Bayern Munich entered into a developmental partnership where players of both professional academies would have “a pathway to soccer in the United States and Germany. Dallas and Bayern will also come together to exchange talent, allowing young players to experience different coaching styles and settings to enhance their development.”


On Tuesday, FC Dallas announced that homegrown defender Chris Richards and academy midfielder Thomas Roberts have begun a 10 day training stint with Bayern. In April, Richards was announced as the club’s 22nd homegrown signing and was part of the U.S. U-19 team in January at the youth summit.

Johannsson done for the season

There are only two more games left in the Bundesliga season but Aron Johannsson will not take part as the Werder Bremen forward has an ankle injury that will keep him off the field.

It is unfortunate for the off-injured Johannsson that he never seems to stay healthy for an extended period of time. It does raise questions about where he will be next season and beyond.