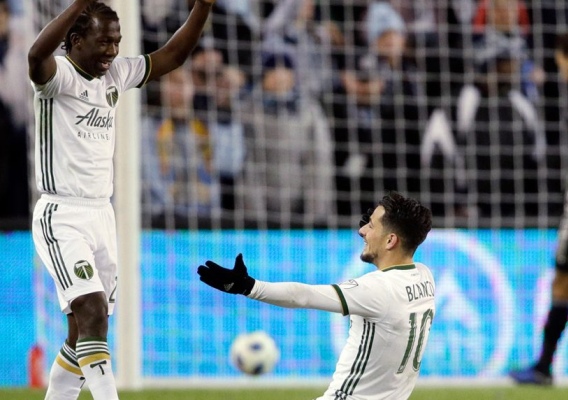 The Conference Finals are now over and MLS Cup 2018 is set as Atlanta will host Portland Timbers. ASN's Brian Sciaretta looks at the two games last night the divergent paths of the two South American coaches in MLS Cup.
BY Brian Sciaretta Posted
November 30, 2018
2:00 AM
MLS CUP 2018 is set and it will feature Atlanta United hosting the Portland Timbers. The matchup was set on Thursday night and while it was expected that Atlanta would take care of business, it was a surprise that Portland was able to get past Sporting Kansas City away in the second leg.

The final matchup features two coaches who were born in South American but whose similarities end there.

Portland’s Giovani Savarese is in his first year has a head coach in MLS and he has done a fantastic job. Born in Venezuela, he made most of his career as a player and a coach in the United States. He moved the U.S. to go to college in New York. It was there where he became a legend in the first year of MLS with the Metrostars. He was one of the first players to use the league to springboard his career. After his playing career, he worked his way up as a coach also within the United States. Fittingly, he became an American citizen earlier this year.

On the other hand, Atlanta’s Argentina-born Tata Martino represents new version of MLS compared with the 1.0 edition Savarese came through with the Metrostars. Martino coached Barcelona and when Atlanta hired him, it sent shockwaves. But Atlanta was just another steppingstone for Martino who has never coached a club longer than two years. While he embraced Atlanta and it was useful for him to likely secure the Mexican national team job, his identity is not shaped by the United States. It’s a modern football relationship where Atlanta was just another step in the career of a top manager. Saverese’s relationship with Portland reflects a long-time bond with a country that helped produce him and now has taken him in.

To me, that is one of the most compelling stories of MLS Cup 2018 and neither manager had a better story. It’s great to see an immigrant come to the United States, make a name for himself, and rise to the highest level the country has to offer as a player and now as a coach. On the other hand, it’s also great to see that this country can be seen as an important link in the chain for coach who is held in high regard internationally.

So how did both teams get here? Here is a take on Thursday night’s second leg games.


The first leg failure from the Red Bulls is mostly due to a strange decision from new head coach Chris Armas to drop the press. That has been his team’s modus operandi and the way in which the team won the Supporter’s Shield.

In the second leg, Atlanta put on a first-rate defensive performance that was disciplined and well-executed. It didn’t let New York into the game and one late goal from Tim Parker was an afterthought.

The Red Bulls won the two regular season battles but Atlanta won the war. They were able to both stick to their style but also adapt to suit the specific need for the game. The Red Bulls bailed on “Plan A” in the first leg and then didn’t have a “Plan B” when the situation called for it.

For Red Bull and Metrostar fans, the wait for the Cup continues.


And as ASN contributor Mark Fishkin also points out, the Red Bulls have something at stake in MLS Cup as well.


Atlanta must win MLS Cup for #RBNY to make the 2019 CCL. Try to keep your lunch down.


Whether it be the World Cup, the Champions League, or the MLS playoffs, winning a knockout-style even requires a bit of magic. As the competition gets better every round, winning teams are going to have to do something special along the way.

Portland did just that against Sporting Kansas City. After a scoreless first leg, most figured Sporting was the favorites returning home for leg two. And it appeared that was justified in the first half when Sporting struck first.

But Portland was able to turn the tide because they had several players who were capable of making the big play that can decide a game. Sebastian Blanco’s 52nd minute goal was one of the best goals in the history of the MLS playoffs.


Can’t get over this strike from last night https://t.co/D2YtBwILjR

From there, the momentum shifted firmly into Portland’s corner and they never looked back.

This year, the Portland Timbers are the poster boys for the insignificance of the regular season. The team was brutal in August and September where it lost four in a row and had just three wins in 10 games. But here it is, going to MLS Cup because it found a way to win at the right time.

Full credit for Savarese, however, who kept his team together through thick and thin this year in his first year as a head coach in the league.