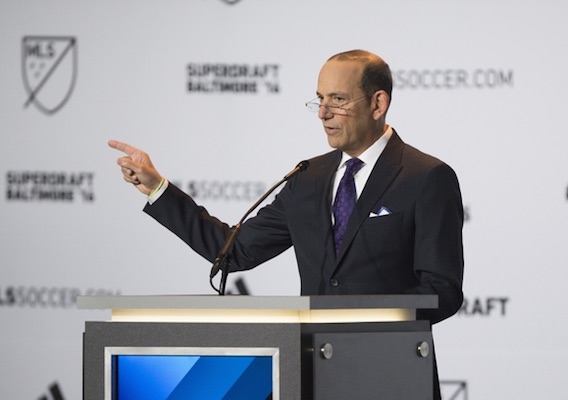 There was a lot of MLS news in MLS on Thursday as the Board of Governors made two huge announcements regarding the league's policy over training compensation and solidarity payments and expansion. Then in Texas, the Seattle Sounder's academy is turning heads against top tier opponents at the GA Cup.
BY Brian Sciaretta Posted
April 18, 2019
7:55 PM
MAJOR LEAGUE SOCCER made two big announcements on Thursday night at the Board of Governors meeting in California. The first had to do with expansion and the second had to do with training compensation and solidarity payments. Meanwhile in Dallas, the Sounders academy team is rolling


The news that MLS clubs would begin to both receive and pay training compensation and solidarity payments was huge and it was one that was met with strong disagreement from the players union, the MLSPA.


A key excerpt from the Q&A on MLS’ website about solidarity payments:https://t.co/Az13xJuQM1 pic.twitter.com/3WD0uL1U63


The purpose of this is to protect MLS academies which have developed a significant number of talented players who have instead signed for clubs abroad. In those situations, the MLS clubs have seen their investment in these players go uncompensated. Such players include Weston McKennie, Tim Weah, Chris Gloster, Ulysses Llanez, Alex Mendez, and many others.

The MLSPA has always been opposed to this as it limits the opportunities for young players as foreign clubs will be more reluctant to sign MLS academy players as they are no longer freebies. It will particularly impact smaller foreign clubs from being able to invest in young American players.

I’m pretty sure most of the soccer players’ unions worldwide are against the entire transfer system, for the record. pic.twitter.com/Oal417B4H6

1. MLS teams can more confidently invest in dev knowing players won’t be poached for free.
2. Foreign clubs will be more selective of what talent they acquire knowing it isn’t free.
3. US player success (Adams) will keep clubs coming.

MLS teams are getting better at developing talent and the success of players coming out of the league will ensure that foreign clubs will still be interested – but they will now have to pay more.

This does nothing to change the fact that MLS teams still have to continue to sign and play the top players coming out of the academies. The 2019 season has seen an increased number of minutes given to players eligible for U.S. youth national teams. That must continue because if MLS teams want to cash in on the investment of their youth players, transfer fees are the true reward. Solidarity payments and training compensation are much smaller in comparison.


MLS announced that it will plan to expand to 30 teams although the league stopped short of announcing a specific timeline for formally awarding the cities. The Commissioner’s office would advance its discussions with Sacramento and St. Louis.

There are 24 teams in the 2019 season and next year Inter Miami and Nashville SC will have their inaugural seasons in 2020 as the 25th and 26th team. Austin FC will begin in 2021 as the 27th team. The league anticipates that the 28th and 29th teams will be announced around the All-Star game and the expansion fee will be $200 million. Garber added that the league will “take time” with the 30th team.

The teams that have expanded in the league over the past 12 years have been important assets. Teams like Atlanta, Seattle, and LAFC have been impressive draws.

The problems for the league continue to be many of the original teams that built stadiums in difficult locations and made poor impressions with fans during the early days of the league.

Expansions can’t take focus away from fixing genuine problems like the Chicago Fire’s need to get out of Bridgeview or NYCFC’s quagmire at Yankee Stadium, or the New England Revolution’s refusal to move away from the 1.0 version of the league, or Houston’s inability to draw well anymore.

The new markets coming into the league are passionate but small in comparison to the size of the markets where there are problems – Chicago, New York, Boston, and Houston.

At the GA Cup in Dallas, the Seattle Sounders are into the final after a convincing 4-0 win over West Ham United. This came two days after Seattle downed River Plate 1-0 in extra time.

Seattle will face Valencia on Saturday at 7:00pm ET in the GA Cup Final

In the win over West Ham, Seattle’s Alfonso Ocampo-Chavez had a first-half hat trick and now has six goals in the tournament. In a unique timing to announce training compensation and solidarity, Ocampo-Chavez is signed to Seattle’s USL team the Tacoma Defiance but does not have a first-team homegrown contract with Seattle.

Seattle has made an aggressive push with its academy this year and it has the youngest team in the USL where five of its GA Cup team now play.

These players are still very young and Ocampo-Chavez is also a member of the United States U-17 national team. Even the best are still a little ways off from being MLS regulars.

But the first team of the Sounders lacks any U.S. youth internationals. With its academy getting headlines this year, the pressure will be on Seattle to get them on the field to justify the academy’s existence and encourage other top young players to sign for them.