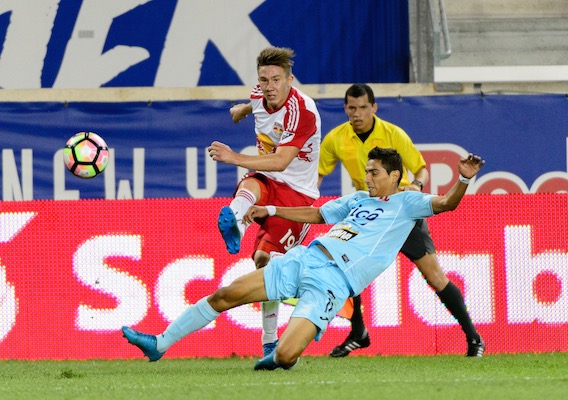 For the 2018 season, ASN is keeping track of how minutes are allocated in MLS across all the clubs in a number of different categories. Here is the edition for the fourth week of the season.
BY Brian Sciaretta Posted
March 25, 2018
6:30 PM
WITH THE FIFA INTERNATIONAL window open, it was a lighter weekend in MLS with only six games taking place. What was interesting is how some teams like the Red Bull and Columbus had shorthanded rosters but still came away with nice wins.

As with all of the previous editions of the MLS Minutes Matrix, the charts are here to give a clear idea of what the league looks like in terms of age and domestic/foreign categories.

Every chart below is scrollable to sort through the data.

One drawback is that most of the high number of U-23 minutes came from 22 year olds, many of whom will outgrow these youth categories over the course of this season. It will be interesting to see if other young players enter into the mix during the season – either from promotion within the organization or USL levels or signings from abroad.

When considering foreign players, overall nearly 15% of all minutes went to players 22 and under which is a healthy number.

Like with previous weeks, week four continued to show wild swings in terms of age ranges and percentage of foreign/domestic. Average ages can swing over three years and teams like Portland can use 9% of its minutes for domestic players and other teams can regularly surpass 60%.

The two teams with the strongest starts to the season, NYCFC and Columbus, are both heavily foreign with each having used over 70% of its minutes on foreign players so far to date.


On the young player list, Alphoso Davies continues to progress nicely with Vancouver. The 17 year old Canadian was easily one of Vancouver's best players in an otherwise dull scoreless draw against the Galaxy.

Chris Durkin has seen regular minutes to start the season but on Saturday he earned his first career MLS start although DC United was overmatched in a 3-1 loss Columbus.

The best outings among the younger players came from Dallas midfielder Jacori Hayes and Red Bulls winger Alex Muyl who both had solid outings.

Hayes played a huge role in Dallas' lone goal in a 1-1 draw against Portland. He made a few nice moves in the midfield before nicely setting up Roland Lamah for the goal.

But the best player on the above list was Muyl who had a huge night for the Red Bulls on Saturday in a 3-0 trouncing of Minnesota. He scored the opening goal with a nice move and then had perhaps the best assist of the season's opening month on Bradley Wright-Phillips second goal.