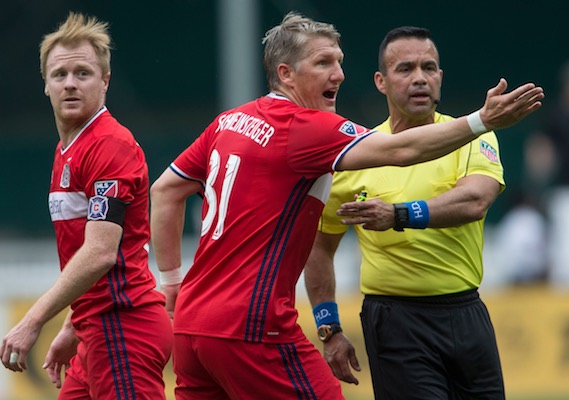 The Major League Soccer season can drag this time of year, and with so many teams making the playoffs it's hard to inject meaning at this stage of the season. Solution: experiment with video replay!
BY Franco Panizo Posted
August 04, 2017
12:00 PM

READY OR NOT, here it comes.

MLS is set to introduce video replay this weekend, and the controversial system designed to help referees get decisions right is sure to be the biggest talking point as the league enters the August portion of its regular season.

MLS plans to use video reviews in its games to ensure that goals, penalty kicks, and red cards are all called properly, and that cases of mistaken identity are corrected. Whether that actually ends up being the case is anyone’s guess, but MLS is just fine with being the guinea pig and trying to find out.

One of the first matches that could be affected by Video Replay will be Sunday’s marquee showdown in New York. This year’s second installment of the Hudson River Derby will take place at Yankee Stadium, and the New York Red Bulls will be keen on exacting revenge on its cross-town rival after falling flat at home in late June.

The Red Bulls have enjoyed a resurgence since that 2-0 defeat, winning all four of its games in July and looking more like the side that was at the top of the Eastern Conference during the past two years. A major reason for that is the play midfielder Daniel Royer, who was named the Player of the Month on Friday after scoring six goals and assisting on another in July.

Slowing Royer down while also trying to limit Bradley Wright-Phillips and Sacha Kljestan will not be easy, but NYCFC has plenty of offensive power of its own with the likes of David Villa, Jack Harrison, and Maximiliano Moralez all available for selection. This meeting is unlikely to be a defensive battle, so expect plenty of chances and goals as the New York clubs try to one up each other in what is surely to be another intense affair.

For the second straight year Federico Higuain is the topic of a major headline in Columbus. This one is entirely his own doing, however.

Higuain told the Columbus Dispatch this week that he believes this will be his final season with Crew SC. Head coach Gregg Berhalter did not come out and completely rule that out as a possibility in his talks with the media, but no matter the situation there is now something else that the club will be thinking about going into its Saturday night road fixture against the San Jose Earthquakes.

STORY: Higuain said he's done w/#CrewSC after this season, Berhalter said still a chance to keep him in Columbus: https://t.co/Ara9JIJGE2

That is not a good thing either, as Columbus sorely needs a win at Avaya Stadium. Crew SC has failed to pick up maximum points in its last two matches, and is currently in sixth place in the Eastern Conference. The club leads Orlando City by just two points, and another loss could see Columbus drop below the playoff line.

This one could get ugly, but it still might be a spectacle worth watching.

D.C. United will help open the weekend slate by hosting Toronto FC, and the Saturday night encounter has mismatch written all over it. Yes, D.C. is playing at RFK Stadium but the last-placed club is on a six-game losing streak that has seen it concede a whopping 18 goals.

League-leading Toronto FC, meanwhile, is undefeated in four games and has its eyes on the Supporters’ Shield. Toronto will have all its top weapons available, too, including MLS All-Stars Michael Bradley, Jozy Altidore, and a confident Sebastian Giovinco—who bagged a brace and delivered an assist in a rout of New York City FC last week.

If the MLS Player of the Week has more of those types of plays in his bag of tricks, it could be a long, long, long night in the nation’s capital for D.C. United.

Most of Europe’s top divisions are getting ready to kick things off in the next few weeks, so Sunday might mark the final opportunity to get in a full day’s worth of interesting MLS games until the playoffs begin.

In addition to the NYCFC-Red Bulls duel, Sunday will also see the Portland Timbers host the LA Galaxy in a match that had its kickoff moved up to 11am local time. Brunch and soccer certainly does not sound like a bad idea, especially when the game can feature talented stars like Giovani dos Santos and Diego Valeri. Throw in the outside possibility of the game marking the Galaxy debut of Jonathan dos Santos, and this match is worth keeping an eye on.

The week’s final contest also has plenty of appeal. Atlanta United and its dynamic attack will face Sporting Kansas City's stout defense, and both teams will be aiming to extend their impressive unbeaten runs. Atlanta hasn't lost in its last five games, giving up just three goals in that stretch. SKC has not tasted defeat in eight straight fixtures.

The clash of teams with differing styles should also bring with it one of the more intriguing 1-on-1 battles, as speedy playmaker Miguel Almiron will try and lead Atlanta to a win against athletic Kansas City centerback Ike Opara. It is unlikely we see Almiron and Opara in a flat-out foot race, but if we do it could be one of the highlights of Week 22.