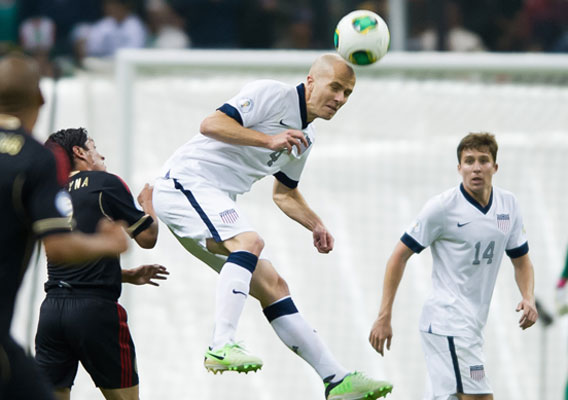 Michael Bradley Should Win U.S. Player of the Year

Who is the United States Soccer Player of the Year? For me, it's a no-brainer: Michael Bradley. But you could make a compelling case for Jozy Altidore, Clint Dempsey, or Landon Donovan. Here's my take.
BY John Godfrey Posted
November 12, 2013
4:00 PM
MY FUTBOL DE PRIMERA U.S. Soccer Player of the Year ballot arrived today at 4:34 a.m. Honda used to sponsor the award, but now it's run by Fútbol de Primera (FDP), the exclusive U.S. radio broadcaster of the Brazil 2014, Russia 2018, and Qatar 2022 FIFA World Cups. (I don't think I've ever listened to soccer on the radio. May have to try that sometime.) Media types do the voting, and any U.S. national team player who has appeared in three or more games in 2013 is eligible for the award. Worth noting: Club form is irrelevant. It's all about performances for the United States national team.

Tim Howard has never won the award. Neither has Jozy Altidore, DaMarcus Beasley, Carlos Bocanegra, Steve Cherundolo, Tim Howard, Brian McBride, or Joe-Max Moore. If I have my way, the Donovan-Dempsey dominance will end with the 2013 FDP Player of the Year Award.

Both players deserve serious consideration: Donovan played in 10 matches this year, scoring eight goals and registering eight assists in 818 minutes of action. He also led the U.S. to the 2013 Gold Cup title in impressive fashion, albeit against uneven competition. Dempsey, the team captain, also played 10 times, scoring six goals and assisting on two others in 899 minutes—and he could add to all of these totals in the next week. Dempsey carried the team with important goals early in the Hexagonal.

Jozy Altidore warrants mention too, having scored 8 goals in 12 matches this year (and a hat trick against Bosnia-Herzegovina). Eddie Johnson leads the field with 15 games played, even if he did come off the bench in six of them. But Michael Bradley is far and away the best player on the U.S. men's national team, and he deserves to win the award this year.

Bradley's 2013 statistics don't stand out—eight games played, zero goals, two assists so far—but everything else about his game does. He sees the field better than anybody else on the team, goes where he's needed, does whatever it takes, and makes everybody around him significantly better. He's the team's best destroyer and its best creator. And when Bradley misses a key match? Well, you remember this one, don't you? Vision. Passion. Grit. Commitment. Bradley would have made a great Navy Seal. I can see Dempsey, Donovan, and Altidore receiving first-place votes based on their goalmouth contributions, but I'd like to believe that American soccer pundits recognize Bradley's value to the team beyond the scoresheet, and give him the award he so richly deserves.

Here's what my ballot looks like: 1) Michael Bradley; 2) Clint Dempsey; 3) Jozy Altidore. (Sorry, Landon, you get marked down for the Cambodian sabbatical, and because only one of your goals came in a Hex match.) Agree? Disagree? The FDP ballot asks voters to name their top three choices, so give us your Win, Place, and Show votes below in the Comments. John Godfrey is the founder and editor in chief of American Soccer Now.