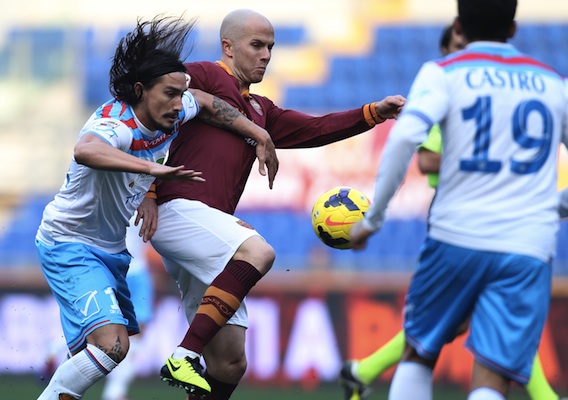 Transfer rumors are starting to bubble up in England, Germany, and Italy. Here is Josh Deaver's weekly look at some of the key players featured in the ASN 100.
BY Josh Deaver Posted
December 31, 2013
4:54 PM
Michael Bradley—ASN rank #1
With the "silly season" nearly upon us, Michael Bradley’s name has begun to surface in conjunction with a potential move from Roma, and maybe even Serie A, during the upcoming transfer window. The latest rumors have the midfielder being shopped by the Italian club’s director Walter Sabatini during a recent trip to England. Interested parties are said to include EPL sides Cardiff City and Southampton, while relegation-embroiled Fulham has seemingly emerged as the front runner to acquire Bradley. Rumblings of a permanent move to recently promoted Hellas Verona, in the form of a good ol’ American-style trade, have also been floated in recent days. Wherever ends up playing, the Serie A returns to action next week. Roma (2nd, 41 pts.) will take on league leaders Juventus on Saturday in what may be a vital fixture in the race for the Scudetto. Hellas Verona (6th, 29 pts.) will take on Udinese on Sunday. Jozy Altidore—ASN rank #2
Despite being firmly planted at the bottom of the Premier League table, the Black Cats continued to hang tough during the week’s demanding stretch of games. Amazingly unbeaten in its last five, the club picked up two crucial results against Everton and Cardiff City this week. On Boxing Day, Altidore entered in the 87th minute of a 1-0 win over Everton. Two days later, Altidore returned to the starting XI against Cardiff City. The mercurial striker should’ve picked up his second goal of the season only to be caught wrong footed on what should’ve been a simple tap-in at the mouth of goal. It’s been that sort of season, hasn’t it? Tim Howard—ASN rank #4
In what was a jam-packed week for English soccer, Howard started between the pipes for Everton but would not finish. Twenty-three minutes into a Boxing Day fixture with Sunderland, the American net minder was shown red for a challenge on Sung-Yong Ki, who would step up and convert the penalty for the only goal of the game. Forced to play with 10, the Blues couldn’t find the score sheet in a 1-0 loss. The Toffees responded nicely three days later, picking up three points in a 2-1 win over Southampton, moving the club into fourth in the English Premier League. Howard will be eligible to return in a New Year’s Day clash with Stoke City. Fabian Johnson—ASN rank #6
Also on the transfer front, reports from German publication Bild have identified Johnson as a potential target for Borussia Monchengladbach this summer. The left back’s contract with Hoffenheim expires at the end of the season, and if unsigned by then suitors would be able to swoop in and sign the defender on a free transfer. The proposed move would be a huge upgrade over Hoffenheim, a club consistently in the bottom half of the table which only narrowly escaped relegation last season. Gladbach is currently third in the Bundesliga, ahead of powerhouse clubs like Dortmund, and under current standings would automatically qualify for next year’s Champions League. Aron Johannsson—ASN rank #11
A series of tongue-in-cheek tweets from the Alkmaar striker this week briefly reignited rumors that the Icelandic-American could be heading to perennial Scottish powerhouse Celtic FC during the upcoming transfer window. Don’t get too excited though, Hoops fans. According to one Icelandic outlet, the 23-year-old was simply passing through on a layover before jetting off for winter vacation in Dubai. Steve Cherundolo—ASN rank #31
After a dismal start to the season, which has seen Die Roten pick up 18 pts in 17 matches while going winless away from home during that same stretch, Hannover 96 sacked manager Mirko Slomka this week. Former Turkish NT assistant Tayfin Korkut has been appointed as his successor, marking the 12th manager Cherundolo has played under since joining the club in 1999. While inevitable, the move may the leave the captain in the lurch. The 34-year-old defender recently made his return to the Hannover starting XI prior to the winter break, his first on-field appearance since being sidelined with a knee injury in May. Eric Lichaj—ASN rank #42
Lichaj and Nottingham Forrest continued to keep pace at the top of the English Championship this week—picking up six points in a 2-0 win over QPR and a 2-1 victory against Leeds, respectively. Lichaj started both matches, playing 90 minutes in each win. On Boxing Day, Lichaj lined up at left back and by most accounts had a solid outing, shutting down the QPR attack and leading the match in tackles with five. On Sunday, Lichaj once again worked a full shift for Forrest in a 2-1 win over Leeds. It was a game that also saw the debut of 18-year-old American eligible Gboly “Gregory” Ariyibi. Here is a photo of the two battling for possession. Tim Ream—ASN rank #54
Ream continued his impressive run of form for Bolton this week, starting and playing 90 minutes in both matches for the Wanderers during the Winter holiday. Following a 1-0 win over Barnsley on Boxing Day, Ream picked up a 39th-minute assist in a 5-3 loss to Championship leaders Leicester City on Sunday afternoon. Despite it being reported on some scoring sites, Ream was not responsible for a 41st-minute own goal. Bolton (18th, 26 pts) returns to action on New Year’s Day against Middlesboro. Chris Klute—ASN rank #64
It’s been a busy offseason for the #RapKids of Colorado. While it was already revealed that former U.S. under-20 player Shane O’Neill would take part in an offseason training stint with Fulham, the trio of Chris Klute, along with Clint Irwin and Dillon Serna, recently completed a week-long stint with Everton. “It will be great for these young players to see how Everton trains and prepares, and for them to experience the culture in England,” commented Rapids technical director Paul Bravo. The trio returned from Goodison Park on Sunday, while O’Neill is expected back from Fulham in the coming days.