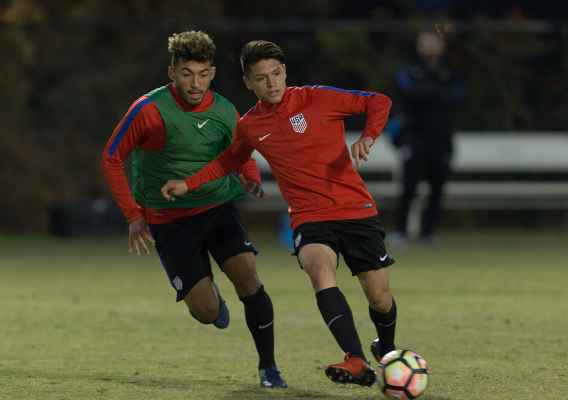 Mexico after Gonzalez, Saief on the move, and more

Mexico's pursuit of Jonathan Gonzalez won't go away but fortunately the story will be ending soon. Elsewhere, American players are reuniting with coaches as Kenny Saief might move to Anderlecht to play under Hein Vanhaezebrouck again and Benny Feilhaber could rejoin Bob Bradley.
BY Brian Sciaretta Posted
January 02, 2018
10:05 PM
THE JONATHAN GONZALEZ international decision continues to be an unfortunate story to follow for American fans following the World Cup qualifying debacle. With the U.S. team without a coach and out of the World Cup, Mexico is looking to pry him away from the program.

Fortunately, however, this decision is unlikely to linger as long as previous dual nationals who were courted by multiple teams. Nevin Subotic kept people guessing for over a year before leaving the U.S. program tp join Serbia. For Gonzalez, January will tell us almost everything about where Gonzalez’s heart lies.

Elsewhere, the transfer widow brings us news of an American move and the MLS Schedule is now released.


Another day leads to yet another report about the Mexican federation aggressively going after United States youth international Jonathan Gonzalez.

By now everyone knows that Gonzalez, 18, is one of the top young players in Liga MX. In 2017 he was named to the Liga MX first team Best XI after helping Monterrey finish first in the regular season and advance to the final where it eventually lost to Tigres. Gonzalez was a regular starter in central midfield where he won praise for his ability to win balls, force turnovers, and help maintain possession.

Born and raised in California, Gonzalez has been a regular with U.S. youth national teams since the U-14 level. This continued at the U-16, U-18, and U-20 levels. As recently as last February, he was part of the U-20 team for the CONCACAF World Cup qualifying tournament while playing “up” a cycle as he is also eligible for the 2019 U-20 team. His single appearance in that tournament meant that if he were to decide to play for Mexico, he would have to apply with FIFA for a “one-time switch” which would forbid him from every representing the United States again.

Now a report from ESPN in Mexico states that Mexican national team is planning to call him up for its upcoming friendly against Bosnia and Herzegovina on January 31. Gonzalez would then have to decide to accept the call-up and file the one-time switch or decline and remain a United States player.

We also know from an interview in December with Soccer America that Gonzalez was not called up by interim head coach Dave Sarachan the U.S. team’s November friendly against Portugal.

Should he have been called-up? Yes. It was an oversight by Sarachan. Gonzalez is one of the best performing American teenagers of 2017.

Still, it is unrealistic to think such a decision is going to sway Gonzalez. The friendly against Portugal was one of the most meaningless friendlies the U.S. team will ever play. Sarachan is also an interim coach and Gonzalez is smart enough to realize that basing a decision to leave the U.S. program for life over a single camp run by an interim coach is shortsighted.

If Gonzalez opts for Mexico, it is almost certainly going to come down to whether or not he believes he has a chance to make the World Cup roster this summer. It won't come down to Sarachan's November roster decision. If he does believe that a spot on Mexico's World Cup team is possible, he could decide to switch because that is the one thing Mexico can offer that the United States cannot.

If, however, he believes that it is a long shot to make the Mexican World Cup team, it is hard to see why he would permanently want to tie himself to Mexico right now. One thing Gonzalez does know is the quality of the young American players coming through the pipeline right now. He knows Christian Pulisic, Tyler Adams, Weston McKennie, and Erik Palmer-Brown. He is still friends with many American players of his generation.

The odds are that he sticks with the United States but that is far from  100% certain. If he does bolt, however, it will certainly come down to the opportunities Mexico can offer in 2018 as opposed to an oversight by the interim U.S. manager.

Fortunately, this matter will be over with quickly. If he files his one-time switch soon, it is over. If he turns Mexico down now, he will likely remain a U.S. player for the duration of his career.

Saief On The Move?


The 2018 January window is only few days old and it looks like one American could be on the move within Europe. On Thursday, reports surfaced out of Belgium that Kenny Saief could be leaving Gent and heading within Belgium to Anderlecht.

Saief was born in Florida but raised in Israel who he represented internationally at the youth level. Last summer, however, he filed for a one-time switch to play for the United States at the Gold Cup. A hernia injury followed by subsequent complications from the surgery saw him miss most of the remainder of 2017.

But now returning to health, Saief is looking to reestablish himself as one of the best left-sided midfielders in Belgium’s top league. Upon first glance, a move from the fifth-place team to the third-place team seems lateral but Anderlecht is a much bigger club in Belgium than Gent. Anderlecht won the title in 2016/17 and also is more attack-oriented.

But the most important fact behind the move is that Anderlecht's manager, Hein Vanhaezebrouck, also managed Saief at Gent from 2014 through 2017. So Saief is going to play under a coach who both knows him and rates him highly. This will only boost his confidence as he continues to return.

Should Saief return to the form he displayed before his surgery, he will be a huge asset to Anderlecht and will have more opportunities to create and score goals. That should have him in the shop window for bigger clubs sooner than later.


There is little question that many of the most memorable moments in Benny Feilhaber’s career came under Bob Bradley. There was his goalzo against Mexico in the 2007 Gold Cup final. Then the assist against Spain in the 2009 Confederations Cup semifinal. In 2010 there was the comeback against Slovenia after trailing 2-0 at halftime.

And it wasn’t always positive. One time when Feilhaber was struggling in Europe, Bradley (still the U.S. manager) said that Benny needed to “grow up.” But even then, Bradley always brought out the best in Feilhaber.

Bradley is still getting settled into his new job managing LAFC and already he has brought Feilhaber back on board. After the success that Atlanta United had in 2017, LAFC is looking to match the initial buzz in its debut season. Feilhaber will turn 33 this month and is not the player he was when playing under Bradley for the U.S. team. Still, he is capable of producing magic at certain moments and there will be moments where he helps LAFC win games in 2018.