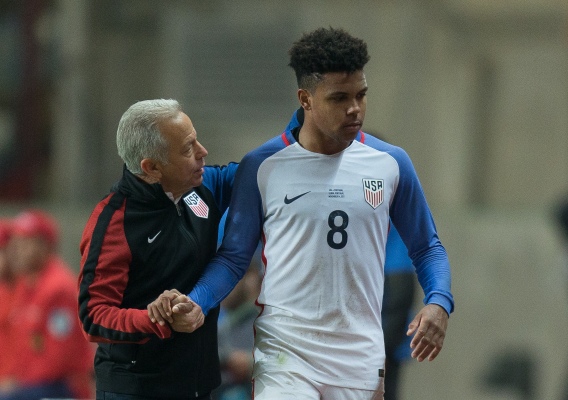 McKennie ready to step into USMNT spotlight in 2018

It might only be his second national team camp, but the teenage Weston McKennie believes he can quickly grow into a leadership role on the U.S. national team as it closes the chapter on 2017 and attempts to build a more positive future.
BY Blake Thomsen Posted
March 25, 2018
9:05 AM
CARY, N.C. - Training is about to begin on day six of the United States national team's camp ahead of the March 27 game against Paraguay, and Weston McKennie is dancing. There is no music, but his infectious energy inspires him to dance anyway. Based on his comfort level, one would never guess this is just his second national team camp.

“When Weston showed up in Portugal [for his first national team camp], I didn’t know him well,” interim coach Dave Sarachan told the Washington Post earlier this week. “But he walked in like he had been there before. He’s got that personality.”

It is that personality, coupled with his increasingly impressive performances for second-place Schalke in the German Bundesliga, that has the 19-year-old midfielder well-positioned to continue establishing himself as a USMNT mainstay for years to come.

In his national-team debut against Portugal in November, McKennie started in central midfield and had an excellent game, scoring the Yanks’ lone goal in the 1-1 draw against the reigning European champions. Speaking to ASN about the game, McKennie offered some insight into his strong mentality, which has helped him hit the ground running for both club and country.

“I don’t really shy away from any challenge,” he explained. “It’s always good to have confidence—not over-confidence, because it was my first time being there—but I felt a type of confidence going into it knowing that the players I was going to play against are playing in the same sort of leagues that I’m playing in. [The level of play] was something I was expecting. It’s something I was familiar with and something I was looking forward to. It was just exciting to go out there and compete.”

Back in camp for the second time, McKennie is looking to cement his place as a fixture in the national team for years to come. While he is keen to learn from veteran players in camp such as DeAndre Yedlin, McKennie already sees himself as a leader in the group, despite being the third-youngest player in camp.

“I believe I can still be a leader at a young age,” he said. “Of course, there are players with more experience than me, and I will always respect them and learn from them. I’ve only been to one camp and one game so far and they’ve had many of these games. There’s a lot of things I can still learn at this level, but I think it will come naturally and it’ll come with the help of the people I’m around. I’m looking forward to the next couple camps and the next couple years.”

McKennie was disappointed that the U.S. failed to qualify for the World Cup, but he has been impressed with the attitude put forth by the players in this young camp, where the average age is under 23 years old.

“There’s still a lot of positive energy in camp,” he explained. “We’re just trying to focus on the next cycle and the new energy that’s coming in. As you saw in the last camp that we were in together, we got a pretty good result. The coaching staff believes in us and wants us to come out and give a lot of energy with the group and click together. It’s been pretty good so far.”

With such a young group together in camp, it is no surprise that McKennie and his fellow U.S. youngsters are dreaming big about what is to come for the next cycle. Many of the players in camp have played together for U.S. youth teams, and there is a real sense of camaraderie and ambition amongst the group.

“Taking over the team is something we’ve thought about,” McKennie said. “Building up together and thinking about the next cycle and the next things that are coming, the Gold Cup and the next Olympics. We’re just trying to come out here and learn from the older players that have been here but also do our own thing moving forward. It’s been a journey and it’ll continue to be a journey.”

Christian Pulisic is expected to be one of the centerpieces of the team moving forward, and, while McKennie is disappointed to not see his friend and Bundesliga rival in camp, he recognizes that Pulisic’s absence could lead to someone else’s gain.

“It goes without saying that Christian is one of our more important players,” McKennie said. “He’s one of the players you can look forward to seeing in the future camps and the future process. Him not being here is a big miss, and we wish he could be here. But it does leave a lot of opportunities for other players to come in and show what they have and prove themselves. At some point the group will start to have a more defined core emerge, but as for right now it’s about seeing where everyone is and seeing other players and seeing how the process will move on from here.”

McKennie’s performances in the center of the U.S. midfield will be one of the most interesting storylines in U.S. soccer over the coming months. At just 19 years old, he has excelled for the second-best team in the Bundesliga. If he is able to consistently transfer his club form over to the national team, it would provide a huge lift to the national team.

Given his confidence and comfort in the U.S. shirt, it would be unwise to bet against him.