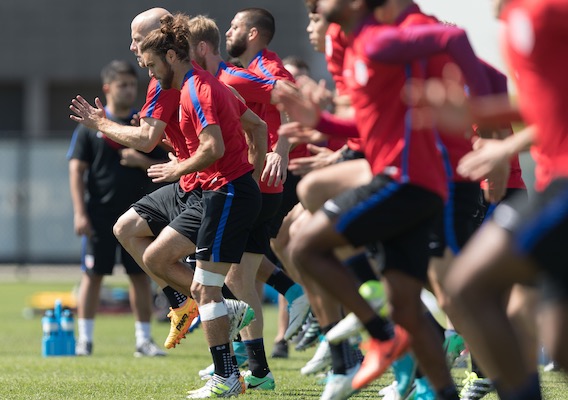 ASN Deputy Editor Noah Davis has a feeling that Bruce Arena will deploy three big bodies in the center of defense tomorrow, bookended by fullbacks who will be authorized to push forward into the attack.
BY Noah Davis Posted
June 10, 2017
3:00 PM

MEXICO CITY—In November, Jurgen Klinsmann employed a 3-5-2 against Mexico. His players looked confused and disoriented, finding themselves in unfamiliar spots. During a break in play in the first half, Michael Bradley and Jermaine Jones pleaded with the coach to switch formations. The German coach relented, but the damage was already done. The Americans lost that game, and the next one against Costa Rica, and then Klinsmann lost his job.

But on Sunday night in the rematch with El Tri at Estadio Azteca, don't be surprised if Bruce Arena brings out the 3-5-2 (or the 5-3-2) again.

If he does, the U.S. will be better prepared. Arena is nothing if not a coach who makes sure his players know their roles, a skill that wasn't high on Klinsmann's resume (or anywhere, really). The Americans will be organized, attempting to absorb pressure and then counterattack quickly in the altitude.

Arena, who's been coming to games in Azteca since 1986, said he didn't know his starting XI during a press conference on Saturday afternoon, but he's clearly been thinking about who to play. The team arrived in Mexico Friday evening after Thursday night's 2-0 victory over Trinidad & Tobago in Denver. Saturday evening's training on the field, where they'll play Sunday night, was the first time the coach had an opportunity to see how his players responded to the quick turnaround. After that, he planned to "determine the starting XI for tomorrow," he said.

If Arena does go three at the back, Omar Gonzalez is a lock to start. He has played in Azteca before and will have fresh legs after not seeing the field in Denver. If Geoff Cameron recovers, he's another sure thing, but he could be replaced by Matt Hedges. John Brooks, who came off against Trinidad and Tobago, should be the third center back.

The wings are more of a question. If Arena wants to get aggressive, he could go with Fabian Johnson and Darlington Nagbe. My guess is that he's more conservative, with DeAndre Yedlin and Jorge Villafaña reprising their roles at right and left back, respectively. I see a midfield of Michael Bradley, Kellyn Acosta, and Christian Pulisic, with Bobby Wood and Clint Dempsey up top. (For what it's worth, I spoke with Nagbe and Acosta before practice; the former sounded like a player expecting to play while the latter didn't.)

"Yeah for sure," he said when asked about it. "Whatever formation we use tomorrow, we'll be ready to go. We've been working on a few things in training but at the end of the day, what Bruce sets for us to do, we'll be ready to do."

What do you think of Noah's Starting XI? Share your take below, and be sure to create your own U.S. - Mexico Starting XI right here on ASN.