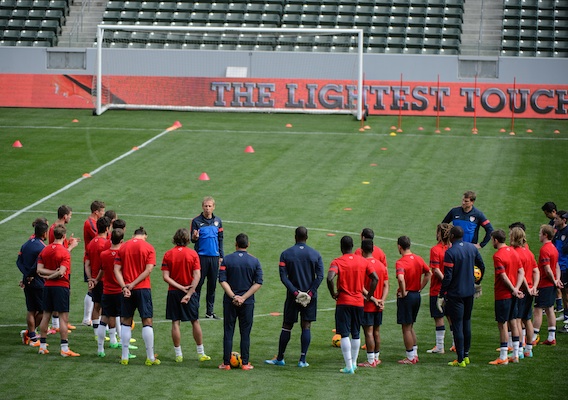 A 2-0 victory over South Korea told us a few things about Jurgen Klinsmann’s plans for the 2014 World Cup. A March friendly against Ukraine should reveal much more. Josh Deaver explores.
BY Josh Deaver Posted
February 06, 2014
10:59 AM
THE UNITED STATES men's national team's recent victory over South Korea was another milestone on head coach Jurgen Klinsmann’s steady path toward assembling his final World Cup roster. During his tenure the U.S. player pool has remained an ever-evolving picture; a delicate menagerie of constantly moving parts. Of the 67 players who have been called up, perhaps little more than half remain in contention for a trip to Brazil and a fleeting chance at immortality. Saturday’s match, and the three weeks of training that preceded it, was about giving domestic-based, MLS players (plus Mix Diskerud) one more chance to impress the U.S. coaching staff. The camp came and went, ending in a 2-0 win for the Americans. More important than the result, however, Klinsmann’s choices provided answers to some lingering questions regarding squad composition and positional depth entering the final stretch run towards the World Cup. So, what exactly did we learn?

Competition at fullback is clearly defined.

The big question coming into camp was the fullback-laden roster and how that might translate to competition for incumbents like Brad Evans and DaMarcus Beasley. Promising Colorado left back Chris Klute, along with the Sporting KC duo of Seth Sinovic and Chance Myers, played the role of potential usurpers, but were cut from the roster prior to game day. This left Portland’s Michael Harrington and Seattle’s DeAndre Yedlin as the lone uncapped defenders with the team. Many expected Harrington to get the nod at left back, but instead his spot went to the latest MLS emigrant and recent Columbus Crew signee Michael Parkhurst. Invited to join the squad for the final week of camp, Parkhurst earned high praise from Klinsmann, who lauded his grace under pressure and ability to circulate possession. By the time lineups were released on Saturday, Parkhurst was in the starting XI, leaving Harrington out of the team sheet completely. That’s called a “tell.” Traditionally a right-sided player, Parkhurst showed well enough on the left, throwing his name into consideration—if only by virtue of an already shallow competition pool. The four-man contest now includes the aforementioned Parkhurst, Mexican-leaguers Beasley and Edgar Castillo, as well as Fabian Johnson, whose preferred position under Klinsmann has yet to be revealed. At the other fullback spot, little has changed. Geoff Cameron is a nearly undeniable starter thanks to his current form for Stoke City, while Brad Evans, who started the match against South Korea, appears to have an inside track for a window-seat to Rio. Again, the options meant to challenge for Evans’ spot mostly washed out. Seattle Sounders teammate DeAndre Yedlin did see time in the waning minutes of the match, but a few nervous touches suggested the speedy fullback may not be ready for primetime. In the periphery, two of Klinsmann most controversial selections—non-selections as it were—loom large. Perpetually fogging the glass window of the American roster, both Eric Lichaj and Timothy Chandler have advanced their cases significantly in recent months. Lichaj is on his first injury-free spell in some time and has carved out a starting spot with promotion-candidates Nottingham Forrest in the English Championship. Chandler—by far the most polarizing American international—is riding high for a resurgent Nurnberg, recently picking up Bundesliga Best XI honors for two consecutive weeks. It was a surprise when the 23-year-old was not called up during the November friendlies; a feeling echoed by Chandler in recent interviews. Was Klinsmann’s freeze-out routine—tried and tested at this point—simply an attempt to humble the outcast defender? We’ll know soon enough.

Kyle Beckerman was very solid, as usual, and Chris Wondolowski continues to make his case. Other than that, not really. Those who saw time will be in consideration until the final roster is chosen. Those who didn’t, will most likely not. (I’m still rooting for you Mike Magee!)

Where does that leave us?

The March 5th friendly against Ukraine will be a significant barometer for where the squad is heading. Being a FIFA-sanctioned international date, two strategies present themselves: Use this all-important camp to cobble together your best-available roster (as Bob Bradley did in 2010) or take the opportunity to convene January Camp II: European Vacation. Klinsmann seemed to indicate the latter on the U.S. Soccer website: “Obviously, it’s challenging bringing a lot of players over from the U.S. or from Mexico for a game that only has three days of preparation.” The coach continued: “It’s more an opportunity to call in more European-based players because they are already in Europe and they can quickly show us where they are at.” Klinsmann didn’t stop there however, mentioning Tim Ream, Brek Shea, Danny Williams, Oguchi Onyewu and, yes, even Timothy Chandler by name. “We want to see a couple of guys who we don’t have a clear picture of right now,” the coach added. “So we might see some people coming back into the roster.” Don’t get too excited, but this set of players could also reasonably include everyone’s favorite optimist, Stuart Holden, who is scheduled to return to full training with Bolton by that time. Dissecting the remaining European player pool—taking into account the departures of Clint Dempsey, Michael Bradley, and Maurice Edu—there remains sufficient room for a couple of trademark Klinsmann curveballs. If the time invested into former under-20 stars Luis Gil and DeAndre Yedlin gives any indication, Klinsmann may make a couple of picks for the Ukraine match with an eye trained squarely on 2018. With young Americans littering the lower divisions in England and Germany, there are a variety of options. Will Packwood is fully recovered from a broken leg and has looked good for Birmingham City since his return last month. Alfredo Morales has become a consistent starter in midfield for 2.Bundelsiga side Ingolstadt, while former U-23 forward Andrew Wooten has impressed for FSV Frankfurt during the ongoing winter break. Munich 1860 striker Bobby Wood, similar to Morales, would represent a pick for the sake of continuity, given that both have seen time with the senior squad under Klinsmann. Despite the plethora of choices, former U-23 attacker Joe Gyau has made a case for inclusion. Gyau—a blazing fast, left-sided winger—received his first senior team call up against Russia in November 2012, but did not feature. The now 21-year-old has been a dominant force for the Hoffenheim reserves in the German fourth division, leading the team in appearances, goals, assists, and minutes played. With his stellar production, it’s a wonder that he hasn’t been loaned out to a second division side or even tapped up to the Hoffenheim first team this season. Staying in the Regionalliga, Freiburg’s Caleb Stanko is a truly under-the-radar pick. If Klinsmann’s priority is to integrate former youth players, Stanko could be next in line. ASN spoke to the Michigan native in December regarding his breakout year with Freiburg. He’s not an option for 2014, but then again, neither is Gil or Yedlin.

Do I have a roster prediction for Ukraine?