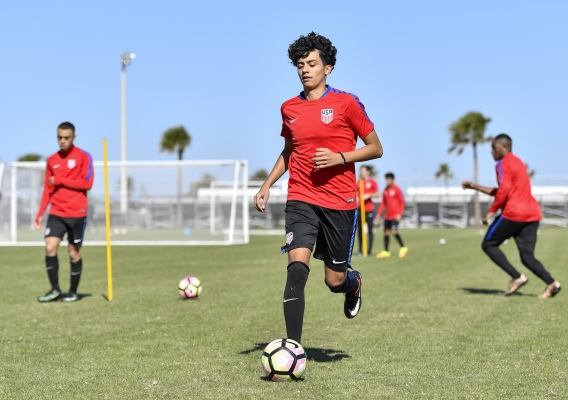 Ledezma & Amaya continuing to push through with the U.S. U-20's

Frankie Amaya and Richie Ledezma have been important players for the U.S. U-20 team so far this cycle. For both players, a lot has changed in their careers the past six months and the next year will be even more interesting.
BY Brian Sciaretta Posted
May 17, 2018
12:00 AM
OVER THE PAST two decades, the United States U-20 national team has been an important tool for American soccer. It has not only been a part of the chain that helps to feed the Olympic team and eventually the full national team, but it has also been an important stepping stone for individual players to get noticed and scouted as they prepare to start their professional careers.

This current edition of the U.S. U-20 team is no exception. The cycle began at January's Youth Summit and was followed by a trip to Spain for a pair of friendlies against an older French youth national team.

The U.S. U-20 team performed well in those games winning one against France and then drawing an Atletico Madrid youth team. One of the positives to emerge from that camp was the play of Richie Ledezma and Frankie Amaya – two players who are close friends and who are rising within the team together.

After solid camps to start 2018, both could be in line for a big role in U-20 World Cup qualifying.

“So far it's going well,” Ledezma told ASN from the current U-20 camp in Florida. “It's hard. There is competition. There are guys that always want to take your position. In this camp going to Honduras, there are guys in my position fighting for the spot.”

Both Ledezma and Amaya have similar backgrounds as neither have had much previous involvements with U.S. youth national teams prior to 2018. At the Youth Summit both began with the U-19 team but were asked to immediately move up with the U-20s with Ledezma seeing time at both the No. 6 and No. 8 positions in the midfield while Amaya fluctuates between the wing and the No. 10 role.

“It was hard to adjust to adjust to this team,” Amaya recalled. “It was actually really difficult. For me and Richie both, because we have never actually been to a legitimate camp. I've never been called up before... The only time I've been called up to was the one camp in January. I was originally with the U-19s but then I stayed three extra days with the U-20s."

“It was hard to adjust and I was really shy,” he added. “Even with the U-19s I wasn't talking that much. I was with Richie most of the time because he was my closest friend. But then getting called up to the U-20s after three days to guys I didn't know. They were welcoming but I didn't really know anyone.”

Then in a 1-0 win over a French team with Zinedine Zidane in attendance (with his son playing in goal for France), Ledezma played a huge role in controlling the midfield and Amaya scored the late winner.

“How big is that?” Amaya recalled with a smile. “Coming from my first camp then scoring against France in front of Zidane. It is really shocking how much my life has changed since January.”

“For me, it gave me confidence when I went back to RSL,” Ledezma said in agreement. “It makes me feel good about myself and Tab told me I had a good camp. I had no confidence coming into the camp in Spain and that changed it all.”

With their rise within the U.S. U-20 team, their lives are going to continue to change as each will soon have to make important decisions as to the next step in their careers.

As a product of the Real Salt Lake Academy and a native of Casa Grande, Ariz., Ledezma has been begun earning minutes for the club’s USL team, the Real Monarchs, and has performed well. He has also been invited to train with the club’s first team.

While he has not yet signed a pro contract with Real Salt Lake, his recent success might have opened other doors as to where to start his career. Still he does admit his ties to Real Salt Lake are strong and that he often gets advice from Martin Vazquez, Monarchs coach Mark Briggs, and first team head coach Mike Petke.

“It depends. It all depends on how I feel and if I am happy and if I want to start my career in the United States or Europe,” Ledezma said. “I am learning a lot from the club here and the coaches are pushing me. They make me do fitness after training. They really care about me.”

For Amaya, 17, his future was far more uncertain. A native of Santa Ana, Calif., Amaya has been a standout for the Pateadores soccer club, which is in U.S. Soccer’s Development Academy.

Regardless of their decisions regarding club situations or college, Amaya and Ledezma likely have a big year ahead with the U-20 team which will aim to punch a ticket and make a run at the 2019 U-20 World Cup in Poland.

In 2017 the U-20 team won the CONCACAF title for the first time and defeated Mexico in the process. But earlier this year, a member from that U.S. team, Jonathan Gonazalez, switched his international affiliation to Mexico in what was perceived as a huge setback for U.S. Soccer.

Ledezma and Amaya are sons of Mexican immigrants but both are happy within U.S. Soccer, despite the bitter rivalry with Mexico. Ledezma added that he doesn’t know anything about the Mexican setup and that he is happy with the U.S. team – the team that called him first. Amaya, however, grew up in a heavily pro-Mexican national team household but did share in their sentiment.

“I don’t know who they're going to be going for. Hopefully me, right?” Amaya said jokingly when asked what his family would do if the U.S. U-20s faced Mexico in qualifying. “I always went for Mexico because my grandmother and family all go for Mexico. But I am not really big on that. My family is big on that but I am not that big on that. I just showed my U.S. jersey right in front of their face [laughs].”

A matchup against Mexico is still a ways off and the team has several camps before qualifying. Earlier in this camp the U.S. team defeated FC Miami City 5-1 before it departed for Honduras for a pair of friendlies against the Honduran U-20 team. After a win over France, the team is eager to show what it can do against CONCACAF opposition.

“It's is a different type of playing style,” Amaya said. “But we are really hungry to win and compete. We want that ticket to the World Cup.”

“There is a lot of potential with this team,” Ledezma echoed. “Hopefully it all goes well.”