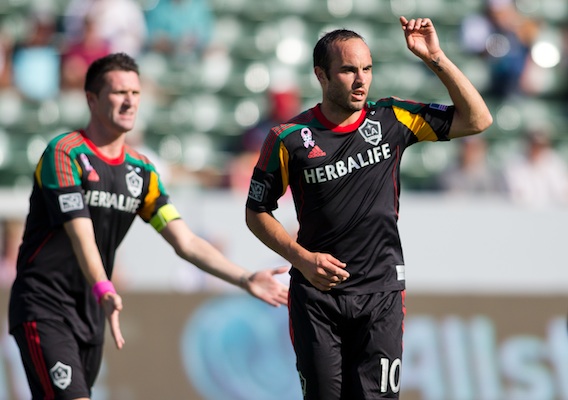 Give a young athlete a smartphone and a Twitter account and just watch him go. That's what we do—watch. And then we gather up the 10 best U.S. soccer Tweets for your perusal here.
BY Justin Churchill Posted
January 10, 2014
11:18 AM
THIS WAS A BUSY WEEK for American soccer—perhaps you noticed. Players on the United States national team certainly noticed, and per usual, they took to social media to express themselves. Here it is, your first ASN Tweets of the Week of 2014.
10. Maurice Edu—Didn't they tell you anything about life in a northern town, Maurice?


9. Michael Harrington—Saying all of the right things. Smart.

Excited and honored to be a part of the #USMNT January camp. Thank you so much for all the support and kind words. Let's get to work.


8. Amobi Okugo—We love the candor. Most U.S. fans agree with his take. Not sure MLS brass will agree...

Please Bradley... stay overseas we look up to you ...you're one of the few #ambitionispriceless ...but if you do come to philly haha

Honored to be called up by the @ussoccer National Team for January Camp. Can't wait to get started! #seattlelove #USAlove

Getting lot of compliments on my quality tweet deletes. Thanks guys.


5. Geoff Cameron—Paying his respects to the legendary Eusebio.


4. Stuart Holden—That's just kinda creepy if you ask me. And yet, we include it here.


3. Dax McCarty—Nothing wrong with a little red hair on the U.S. national team.

“@AlexiLalas: The mutant gene has returned to the #USMNT. Your soullessness is a gift, do not waste it @DaxMcCarty11.” Yes master.

You have to love our game!!! 50% of the time people agree every time. pic.twitter.com/i8zjYpo8Op


1. Landon Donovan—With a resounding statement, Donovan suggests it will be a landmark year for the MLS. (How it all plays out with the national team remains another matter....)

Love seeing @MLS continue to reward US players. It's no longer taboo to play here...players want to be here in their prime #GrowingTheGame

Did Justin get the rankings right? Did we miss a great tweet this week? Tell us in the comments section below.