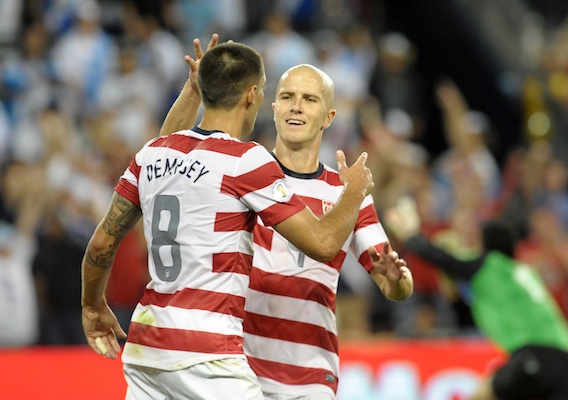 You know how to create your own Starting XI, right? Click here to get started.
Only two players from Major League Soccer made this roster—captain Clint Dempsey and captain-in-waiting Michael Bradley. So that's interesting. Klinsmann addressed this anomaly in a public relations interview on USSoccer.com “This is a huge game," Klinsmann said. "We play Ukraine, which barely missed out on going to Brazil. They had a playoff against France, one of the best teams in the world. So you want to have a very strong team against Ukraine, and as I often mention our team is defined in its spine. The core group of the team is Tim Howard and then Michael Bradley, Jermaine Jones in midfield, Clint Dempsey in front of them and then Jozy Altidore up front. These five players build our spine. If you're noticing a distinct lack of Landon Donovan in the above quote, as well as in the above lineup, you're not alone. Snub? Reality check? Something else? We shall see. “Having Michael Bradley and Clint Dempsey in for Ukraine is very important to us. Clint has played these two months at Fulham and Michael is coming off preseason camp with Toronto, so for us it’s very important to see both back in the team and putting their stamp on the game.” Also noteworthy: Club Tijuana's Edgar Castillo made this squad ahead of "local" fullback options such as Jonathan Spector and Eric Lichaj. Our interpretation? Both Lichaj and Spector should start adjusting their World Cup dreams to focus on Russia in 2018. On a happier note, a few Europe-based defenders will get one more shot to stake a claim for a spot in Brazil. "It’s great to call in players like Oguchi Onyewu, Will Packwood—his first time to come in—Tim Ream, who is playing consistently well at Bolton, Danny Williams, who has now kind of made his way through at Reading and playing week-in, week-out, and Juan Agudelo, who is now in Holland," Klinsmann said. “It’s a huge opportunity for all those guys to prove to us that they are eager and hungry to jump on the train to the World Cup. We will get a good picture of them over those couple of days, and therefore, we left almost all the MLS players back in the United States.” Klinsmann expanded on this notion. “We want to see them perform on the field, but also over four days, we have time to sit down with them for a cup of coffee and discuss their individual situations. We just want the players to understand that every week really counts, every week matters. We want them to pick it up with their club teams. Some players like John Brooks—he sits on the bench right now. Because of injuries he lost his starting spot, and has to fight his way back into the team. “So, the message to all the players is get a starting spot with your club team, to play week-in, week-out. Add to your schedule, on top of your club’s training, maybe one or two sessions a week on your own in order to get yourself a jump start when we go into World Cup preparation camp because it’s going to be very demanding." "The message also is that we are on top of them in terms of scouting them, watching them, knowing exactly what’s going on. We talk to their club coaches. It’s a lot of monitoring work that goes on now over the next two-and-a-half months until we start preparation camp for the World Cup.” What do you think of this roster? Is Klinsmann sending a message to any of his other MLS players? Share your thoughts below.