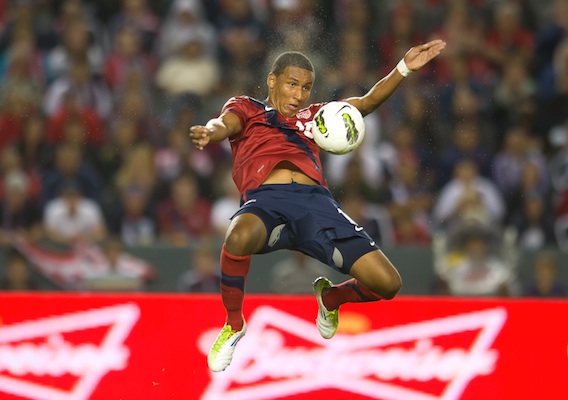 Last week I posited that Geoff Cameron could be the best American field player remaining in Europe. Most responses vacillated between grudging acceptance or shouts for Aron Johannsson, which may not be too far off. However, they—along with Sacha Kljestan, Alejandro Bedoya and a few others—may have some competition in 2014. Juan Agudelo, in purgatory for months, has seemingly sorted out his move to join Cameron in Stoke City, revealing this week that he has signed a deal with the Potters and will be sent on loan for the remainder of the season. The time away would allow the 21-year old to reapply for a work permit before, hopefully, making a permanent move to the English Premier League. Several rumors have emerged placing the 21-year-old in a variety of locales. While clubs FC Twente and Standard Liege were among those reportedly in pursuit, ASN contributor Brian Sciaretta broke the news Friday morning that Agudelo will be headed to the Eredivisie to suit up with FC Utrecht. There is nothing like a good “GOOOOOOOOOOLLLLLLLLLL” to draw your attention south of the border. The one they call “Gringo,” Jose Torres, provided the lung-busting ammunition for Spanish commentators everywhere on Tuesday, scoring the lone goal for Tigres in a 1-0 win over Atletico San Luis in Copa MX play. Recent struggles, which saw Torres register career lows in minutes last season, have him trying to work his way back into the lineup for the upcoming campaign. He did stick the landing on that backflip though. Also on the score sheet this week was Tijuana forward Paul Arriola, who scored for Liga Ascenco side Dorados in its 3-1 Copa MX win over Estudiantes Tecos. Dorados is the second division affiliate for the Xolos (think Sporting KC/Orlando City), allowing Arriola—as well as former under-20 forward Alejandro Guido, who saw 25 minutes of action—to feature for the club during the tournament. Admit it: You forgot about Jonathan Bornstein. The former Chivas USA man suited up with new club Atlante for the first time this week, playing 90 minutes in a 1-0 loss to Merida. Only his second start since 2012, Bornstein has a long way to go if he wants to make it to the World Cup. (OK—we only included that last clause to get a rise out of you. Did it work?) Under-20 midfielder Junior Flores saw his first minutes with the Borussia Dortmund reserves last week, playing 45 minutes and registering an assist in a 2-0 win over Rot-Weiss Essen on Tuesday. He appears set to sign a contract with the German super-club, and with the Bundesliga season set the resume shortly, there is no better time than the present for Flores to make an impact.

Regardless of your feeling on MLS acquisition “rules” or the entire single-entity system, the proposed Maurice Edu-to-Philadelphia-as-a-DP deal remains a tough sell. While returning national teamers (check) and European imports (double check) tend to command a higher premium, Edu’s demands, described by Don Garber as on the “low side” of the reported $1.2 million per year figure, lead to some questions. Namely, is he worth it? Union ownership seems committed to bringing in the former Rangers midfielder. The lack of any recent track record, however, makes it a risky proposition. Edu has played in only 14 competitive matches since arriving at Stoke City in September 2012 (13 of which came while on loan in Turkey) and has not featured since returning from a sports hernia surgery in August 2013. ASN Contributing Editor Josh Deaver is a former academic turned soccer obsessive. Follow him on Twitter already.