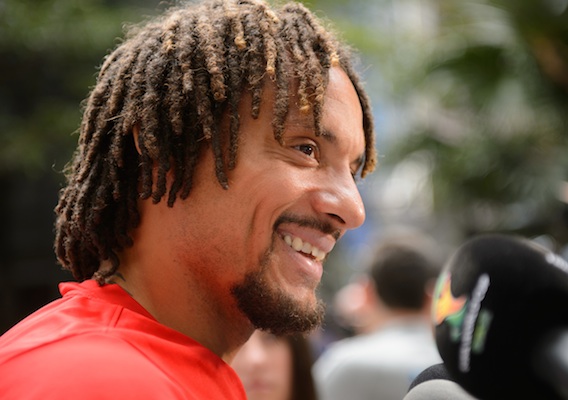 The dreadlocked midfielder recently told ASN that he is very excited about playing in his World Cup. It shows. Jones has been an all-star quote provider, offering up candor, humor, and plenty of insight.
BY John Godfrey Posted
June 16, 2014
3:29 PM
NATAL, Barazil—Some professional athletes have nothing to say. Others have plenty to contribute, but are so guarded in their interactions with the media—perhaps for good reason—that they never give up anything worth sharing. And then there's Jermaine Jones. The 32-year-old midfielder has never been shy on a soccer field, certainly, but he hasn't always seemed particularly interested in engaging with the media. As the 2014 World Cup drew closer, however, the No. 12 man in the ASN 100 has become more and more gregarious. Here's a collection of some of his best Brazil-based barbs and bons mots. On the Brazil-Croatia game and the penalty call
“I watched the game and I was excited that the World Cup started and so it was an interesting game. If the penalty is a penalty, I don’t know. It’s not my decision, it’s not my group, so I don’t care what happens in this group. Brazil wins, Brazilian people are happy. I don’t want to say more than that.” On Tim Howard falling asleep during the Brazil-Croatia match
“Yeah we train hard and Timmy’s like a little bit older so he has to sleep.” On Jurgen Klinsmann motivating the team
“He does a good job. I think it’s important too that we have some guys that have to step on and have to take the team and push the team. For me, it’s the first World Cup and I want to try to win all these games that we play. I hate to lose. In my eyes I have like Timmy, Clint, Michael, Jozy when we see that the team is maybe in like bad feeling or you see that some guys feel a little bit like down, you have to take them and push them onward. You have only one chance to win your games and we need everybody so that’s the point why we have to push everybody.” On expectations from Ghana
“I think out there it will be really hot so Ghana they have like maybe a little bit more chances or better rhythm because they already play in Africa, all the qualify games. We know it will be a tough game, they are a physical team, they have good players with [Michael] Essien, [Kevin-Prince] Boateng, [Kwadwo] Asamoah, but I said before we have a lot of respect for this team, we are not scared. We try to go there and try to win this game.” On the United States' chances against Ghana
“When everybody makes his work and have the trust in themselves and trust in the team, I’m 100% sure that we can beat them and we don’t have to sit back and wait for them to play the game, so we have to play the game that we play always so that we know 100% that we win the game.” On Kyle Beckerman as a player
“He loves to make shit work for the team. He is always one of the guys who push the team, push the players. He never gives up and sometimes you need that kind of player on the team. Outside of the pitch in his private, he is like a really quiet guy, sometimes he makes a joke and everybody is like, ‘Oh, Kyle, you’re here!’ He’s a really nice guy.” On former teammate Kevin-Prince Boateng
“I made trash talk when I was 18 or 19, so I will wait until the game comes and I will see him before the game so we will talk a little bit. Maybe we will have more contact after the game, maybe when we win maybe then I do some trash talk but right now I wait for the game.” On how the United States' defensive corps
“I would say that you can see that everybody comes now, you can see that the World Cup starts on Monday and everybody is really good in shape and concentrate 100% and the guys in the back too. When I see [Fabian Johnson] what he is playing right now is unbelievable. DaMarcus Beasley, nobody talks about him but he’s playing is crazy. He was a striker and he plays left back now and it’s amazing. Then you have the guys in defense like [Geoff Cameron] and [DaMarcus] Beasley, they’re making good job. This is the point where we have to trust them and maybe mistakes happen but we know that we can be a tough team who sticks together when everybody does their job and doesn’t try to make more than they have to do.” Are you a fan of Jones' work on the field? Off it? Tell us your thoughts below.