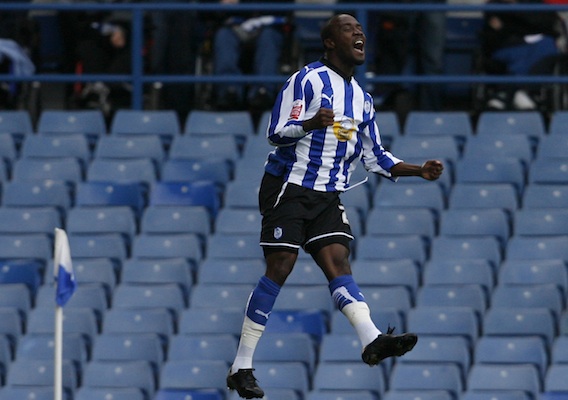 The forward, who happens to be a teammate of recently loaned Stuart Holden, scores again for Sheffield Wednesday, while other Jamaicans make their marks in Europe. Your CONCACAF roundup starts now.
BY Jon Arnold Posted
April 16, 2013
11:00 AM
The five national teams the U.S. faces during the Hexagonal round of World Cup qualifying include players who play outside CONCACAF. You know how the Americans fared abroad each week, but what about the players they’ll be facing? We’ll keep you updated on their progress each week. Also, don’t forget to check out our section dedicated to all things Hex.

Jermaine Johnson looks like the most dangerous player in the Reggae Boyz attack, at least based on recent form. He scored his fourth goal in four games for Sheffield Wednesday. The Owls couldn’t get the win, though, losing to Rodolph Austin and Leeds United, 2-1. Austin went the full 90.
Johnson came on in the second half during the midweek win against Millwall. Ricardo Fuller tied the bow on Charlton Athletic’s 6-0 beat down of Barnsley on Saturday. All six goals were scored by different players and Fuller’s came in stoppage time. Here’s a video of all of them. Not enough Jamaicans scoring goals for your liking? There’s more. Jermaine Beckford came on in the 62nd minute for Championship side Huddersfield Town. The manager might not wait that long next time. Beckford put in a rebound in the 69th minute and beat a defender just a minute later for a brace in a 3-1 win over Wolves. Theo Robinson wasn’t in the team. A point finally came for the relegation-bound Reading crew who drew 0-0 with Liverpool. Adrian Mariappa has been in poor form but played well against the Reds. Jobi McAnuff and Gareth McCleary also went the full 90 for the Royals on opposite wings. Only Tremaine Stewart represented CONCACAF on the Aalesund team this weekend with Demar Phillips picking up a minor injury. Stewart didn’t score on countryman—but not national teammate—Dwayne Kerr, but his club still put two past the Sarpsborg 08 keeper for the win. Lloyd Doyley went the distance at fullback for Watford in a 3-2 loss to Peterborough United, who feature Steve Zakuani’s brother Gabriel. In his second appearance after being loaned to Bodo/Glimt, Dane Richards played the whole second half at forward. Motherwell started a Jamaican midfielder against St. Mirren, but it wasn’t Omar Cummings. Chris Humphrey went the full 90. Humphrey hasn’t been in the national team since June of last year when he missed curfew and was dropped after a match against Panama. Karabukspor didn’t select Luton Shelton in a loss to Galatasaray.

Center back Román Torres and Millonarios lost to Tijuana in Copa Libertadores play in midweek and if crashing out of that competition wasn’t painful enough, it also lost 1-0 on the weekend. Torres scored... for the opponent. His third-minute own goal was the difference with Santa Fe winning 1-0 and overtaking Millonarios at the top of the table. Itagui is level with Torres’ club on points, but it’s not because of Nelson Barahona. He didn’t play in Itagui’s loss to Junior, but fellow Panamanian Gabriel Gomez started and went only 36 minutes. Junior had gone down 2-0 and brought on a goalscorer, but one Twitter user said Gomez ‘got turned around more than a barber’s chair.’ Not sure if he’s just harsh or if Gomez was struggling. Armando Cooper was dropped from the Godoy Cruz team after his first appearance in a month last week. Old man Luis Henríquez went the full 90 for Lech Poznan on Monday in its 3-0 win against Piast Gliwice. Rolando Escobar and Deportivo Anzoategui haven’t played since we last met.

Defender Maynor Figueroa went the full 90 in Wigan’s 2-0 FA Cup win against Millwall. Roger Espinoza was an unused substitute. Emilio Izaguirre went all 120 for Celtic, who beat Dundee United in extra time to advance to the Scottish Cup final where it’ll face Hibernian. Hibs also needed extra time to win its tie, and Jorge Claros—Hibs very own Honduran—played the whole match at defensive midfielder. Claros and co. went into the locker room down 3-0 and came back to win 4-3. Carlo Costly opened the scoring for Veria in a 5-0 win against Patania. With a result like that, you’d think Veria was rolling along, but the win put it out of the relegation zone. It’s more of a log jam than a zone in Greece as eight clubs are six points or fewer from the drop. Osmán Chavez played the full 90 for Wisla Krakow, who couldn’t get a win against Legia Warsaw. Luis Garrido helped Red Star Belgrade to a 4-1 ictory against Spartak Subotica. Andy Najar still awaits his debut with the Anderlecht senior side.

Bryan Ruiz was probably Fulham's best player, but the club gifted Aston Villa an own goal and could only get a draw from Saturday’s contest. Joel Campbell started the Seville derby for Real Betis but made way after being booked in the 63rd minute of a thrilling 3-3 draw. Bryan Oviedo was an unused sub for Everton in a 2-0 win against QPR. The Toffees play Arsenal on Tuesday, so perhaps he’ll get some time. Keylor Navas was probably glad he wasn’t in goal for Levante. He watched the 4-0 defeat his club took from Deportivo La Coruña from the bench. Celso Borges played the full 90 in the 10 kit for AIK, which lost to pesky Atvidaberg, 1-0. Rough times in general for Valerengen, but the Costa Ricans are having some trouble Giancarlo Gonzalez was substituted at the half. Diego Calvo played the full 90 in the 3-0 loss, the second straight without a goal for the club. Michael Barrantes was booked and came out late in the match for Aalesund, who won 2-0 as you read above. Midfielder Christian Bolaños was on the bench for Copenhagen, his first appearance in the team since sustaining an injury in the Ticos’ recent Hex matches. His club beat Nordsjaelland, 3-2. Both American Conor O’Brien and Costa Rican Francisco Calvo were on the Nordsjaelland bench.

Gio dos Santos put in another Man of the Match performance and the last-minute winner in Mallorca’s 1-0 victory Monday against Celta Vigo. The match, between the bottom and penultimate teams, was a true six pointer. We’ll see if Gio’s finish saves the club from relegation.
Gol de Giovani dos Santos - Mallorca vs Celta... A crazy match that ended knotted at three featured a pair of Mexicans. Hector Moreno played center back for Espanyol and Andres Guardado lined up at left back for Valencia. Both went the full 90. Carlos Vela of Real Sociedad was a hipster in Saturday’s match getting a yellow card before it was cool. He got booked in the 9th minute (seven others followed, all from the 30th on) and came out in the 77th after a successful stint on the right wing. Hector Moreno and Espanyol put up a clean sheet on the road, beating Osasuna 2-0. He also contributed to the attack, scoring on a glancing header from a corner to make it 1-0. With the match tied 2-2, Espanyol thought it had the winner in the 91st minute, but Sergio Garcia somehow put in an equalizer that Moreno and his back line should’ve prevented.
Espanyol 3 Valencia 3 by acosart Manchester United’s fixture with Stoke seemed tailor-made for Chicharito, but the Mexican striker underwhelmed and left the 2-0 Red Devils win in the 78th minute. Guillermo Ochoa did his thing for Ajaccio in a 1-1 draw with visiting Nancy. He’s attempting to show enough to keep the no. 1 goalkeeper job for El Tri. Noise continues to grow that he’ll leave Ajaccio for a larger club this offseason. Javier Aquino came out of a 1-1 draw early because of an injury. The Villarreal midfielder’s condition isn’t yet known. Whose performance strikes the most fear in your heart? Have we missed any players who you think should be in the U.S.’ game tape rotation? Any information you’d like to see in future editions? Let us know in the comments section. Jon Arnold (@ArnoldcommaJon) is a writer based in Arizona and is ASN's CONCACAF correspondent.