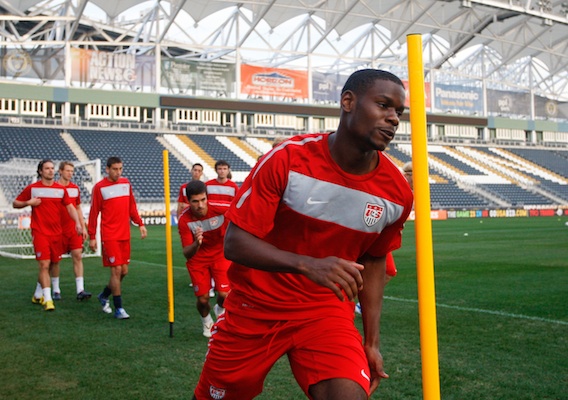 It's All About Maurice Edu And His Return to MLS

It's Maurice Edu's world—we're just tweeting in it. The midfielder/social media champ is revving for a big season and a possible push for the 2014 World Cup. So we put him in the spotlight.
BY Justin Churchill Posted
February 02, 2014
12:19 PM
MAURICE EDU IS BACK in Major League Soccer, which means Maurice Edu is likely to be playing soccer in 2014, which means Maurice Edu is probably going to start tweeting with greater frequency in the coming months. His 466,000+ followers (!) are officially on alert. Given all of that, we thought a Mo-centric Tweets of the Week was in order. Have at it.

Not sure this sartorial splendor is going to fly in gritty, no-nonsense Philadelphia. Does New Orleans have a soccer-specific stadium in the works?

If there's a better human being on the U.S. national team than Terrence Boyd, we'd like to know who it is.

Things will be less chummy on April 5, when the Chicago Fire host the Union.

Congrats to my bro @MauriceEdu on his return to @MLS!

We tried to count up all of the Terps in MLS, but there are just too many.

Our guy @MauriceEdu is back stateside and we couldn't be more excited! http://t.co/K1dWwYVj1b #MOTownPhilly

my guess is Edu plays in MF for @PhilaUnion for designated player $ but his versatility allows them to use him where needed. #CB #CM #USMNT

...and his tall, redheaded bestie never shies away from saying what's on his mind.

Do you really think that a "lack of transparency" is turning potential fans away from @MLS? C'mon.

Will the social calendar leave any time for training?

With Dempsey, Bradley, and now Edu back in America, MLS seems less and less like a feeder league.