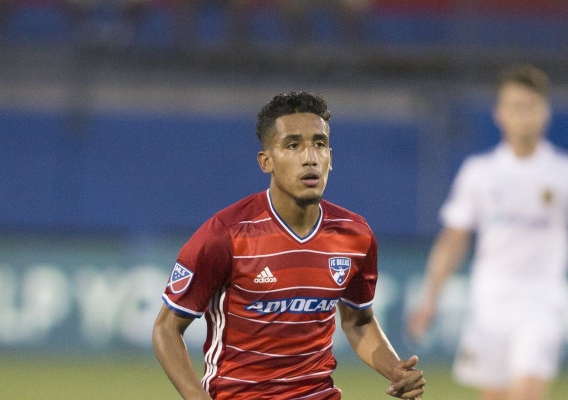 By all accounts, Jesus Ferreira is making a strong first impression with the U.S. U-20 team. But now with American citizenship and first team club minutes potentially on the horizon, it sets the table for a intriguing year for the FC Dallas homegrown product.
BY Brian Sciaretta Posted
January 10, 2019
11:00 AM
WHEN THE United States U-20 team won CONCACAF in November, the team looked so impressive throughout the tournament that it raised expectations for a long run at the upcoming 2019 World Cup in Poland. What is even more interesting, however, is that head coach Tab Ramos did not even have many of his top players at his disposal for that tournament.

The competition to make the current upcoming World Cup team is extremely intense, and that is not even including players like Tyler Adams, Josh Sargent, and Tim Weah who are mostly now with the senior team. Ramos will indeed have many tough decisions for putting together his roster.

One player who is currently in camp and performing well is forward Jesus Ferreira who is making his debut for the United States U-20 team. On Tuesday, the FC Dallas homegrown played well in the second half as the U.S. U-20 team defeated the U-19 team 2-0.

Ferreira has impressed the staff so far and is highly regarded in the strong youth system at FC Dallas. But the looming issue over Ferreira with U.S U-20 team is that he is not yet an American citizen. His formal application for citizenship was filed recently on his 18th birthday on December 24 but it is unclear how long the process will take.

But that did not stop Ramos from calling up Ferreira to get him integrated into the team. Ramos, in fact, has been monitoring Ferreira for some time and now felt that the timing is right. So far, Ferreira is enjoying his time at camp.

“I've been meeting new guys,” Ferreira told ASN of the current camp. “The coaching staff is nice. It's been a pretty good experience so far. It's been a little bit better than expected. I thought it was going to be players mostly focused on practicing but it's more than that.”

“I actually got called up to a U-16 camp once but I don't think they knew I couldn't play,” he added. "At the end, they said they were just going to keep an eye on me because there was no real point for me going to camps since I couldn't play. But my agent has kept in contact with Tab and I've always wanted to try a U.S. camp. It's always been on the table…I don't have a timeline for citizenship but I completed the paperwork before I turned 18 in November. I had everything ready so right when I turned 18, we sent everything in and made phone calls. I don't know how long it will be but it shouldn't be long. Hopefully it's before the U-20 World Cup.”

Ferreira’s recruitment is perhaps one of the most interesting pursuits of an American dual-national (or potential dual-national) in recent times. His pending citizenship stems from his father David Ferreira who was a former attacking midfielder for the Colombian national team. In 2009 the elder Ferreira joined FC Dallas from Atlético Paranaense and immediately became one of the best players in the league including in 2010 when he was voted as the MLS Most Valuable player. In 2013 he returned to his native Colombia to continue his career – where he still plays at age 39 for Unión Magdalena.

While his son moved with his father at a young age to Dallas, he made the decision to stay with FC Dallas when his father left and joined its academy where he signed a homegrown contract in November 2016.

“It was a great opportunity,” the younger Ferreira recalled of moving to Dallas. “We were living in Brazil and the opportunity came at FC Dallas. Everyone was talking about MLS and how it was growing. When it was my turn, he was telling me how the league was going to be even better for me than it was when he was playing. He told me to enjoy my time there… He talks about how the level increases in the United States and when you get into the national teams, the level rises by a lot. He tells me that I always have to be at my top form.”

But now Ferriera is making the transition to the international level and is putting himself into a position where playing in the U-20 World Cup could be within reach, if his citizenship is acquired. So far in camp, his teammates see Ferreira’s huge upside.

“I like him," star attacking midfielder Nick Taitague said. "He’s young, obviously, but he came in without any fear and I think that was important. He is really dangerous around the goal. He is a pain in the ass for center backs, I can already tell that. It’s good. He likes to combine. I think he specializes in being in the box and finishing. He is really tricky.”

As Ferreira is establishing himself with the U.S. U-20 team, it is also going to be an important year for him at FC Dallas. The club recently hired Luchi Gonzalez as head coach and Gonzalez was formerly the club’s academy director and oversaw the development of Ferreira and other key U.S. youth internationals like Brandon Servania, Paxton Pomykal, Thomas Roberts, Reggie Cannon, and even Weston McKennie who left the club before signing a pro contract.

There is little doubt that the door is open for young players at FC Dallas. After spending most of 2018 on loan with the Tulsa in the USL (with six goals and two assists in 14 games), Ferreira is optimistic of a potential breakthrough in 2019 with FC Dallas.

“He was my coach two years ago,” Ferreira said of Luchi Gonzalez. “He's a great coach and I liked him a lot. He knows what he is doing. When he has a goal, he strives to achieve it and won't stop until he achieves it. He works hard and I think he's going a great job. He doens't care about age, if you have the talent and you do well in training, you will play. If we do what he expects and asks while working hard, I think we are going to get minutes.

As with any dual-national there is also the looming debate over which country to represent. This is particularly tricky for Ferreira as he is not yet even a dual-national and only holds a Colombian passport, for now. His father also represented Colombia on three Copa America teams – including the Championship-winning 2001 squad.

Ferreira admits he feels conflicted but also notes Colombia has yet to call him up. A determining factor, however, could be the current U.S. U-20 team. While only a senior cap in an official competition would formally tie him to a nation, Ferreira believes it would be tough to walk away from a program that calls him up to a World Cup, even if its at the youth level.


Jesus Ferreira is having a night for the books!

“Every guy's dream is to play for where they were born,” Ferreira said. “I was born in Colombia and my dad played for Colombia. So it would be really nice to play for them. But I am here in the United States and I really like it too. So it's 50-50 for both. I wouldn't mind either.

“But everybody's dream is to play in the World Cup. If I get the chance to play with the U.S. team at the U-20 World Cup, that would be amazing. I think the U.S. would be my path then.”

Either way, Ferreira is off to a flying start in 2019 and the U.S. U-20 camp is just the first steps of a year which could see him move from a prospect to first team player and U-20 World Cup veteran.

“2019 started with a bang,” he said with a smile. “Hopefully it continues to be great.”