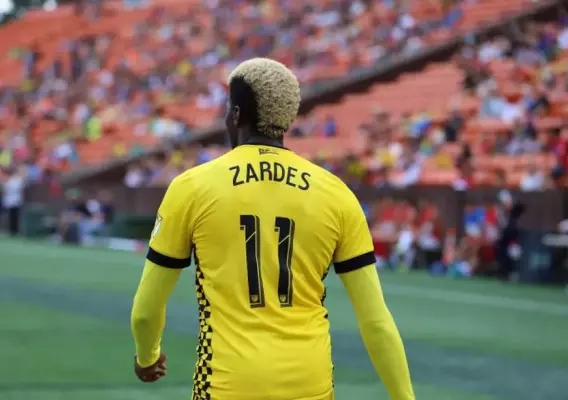 In Columbus, Zardes seeks to make a big presence both on and off the field

On the field, Gyasi Zardes is a polarizing figure that can generate debate among fans. Off the field, the Califorinan is one of the the best teammates and philanthorpists in the league. Now in Columbus he is once again succeeding both off the field and on.
BY Isaac Heath Posted
March 29, 2018
9:00 AM

“If you represent your country you do whatever it takes to play you know, it doesn't matter what position they want to throw you at. Whether its goalkeeper, right back, forward, center mid, left back, left mid it doesn't matter. It’s a huge honor to get called upon by your nation to represent them.”

This “do whatever is needed” attitude is part of what has made Gyasi Zardes a successful player and philanthropist in his young career.

If you bring up the name Gyasi Zardes to a group of U.S. national team fans you will get a plethora of differing reactions. Even in the recent anonymous MLS player poll put out by ESPN, Zardes ranked high in the most overrated player category.

Yet despite the polarizing opinions about him as player, the 26-year-old is one of the more refreshing personalities in the league.

Setting the critics and skeptics aside, he has scored important goals in MLS and for the U.S. national team, but off the field few have rivaled the time spent and impact he has made on young people.

Earlier this year, Kevin Baxter of the LA Times wrote a  piece about the work Zardes was doing in his hometown neighborhood of Hawthorne while a member of the LA Galaxy. In it he described the sadness of the mentored children he would be leaving behind after the trade to the Columbus Crew.

However, for Zardes, a move to another city didn't mean his work would be finished in Hawthorne. The forward began mentoring children from his old high school, Leuzinger, about a year ago and refuses to let a trade get in the way of that.

"I still contact those kids and we utilize technology to keep in contact with each other and I am still mentoring them from Columbus," Zardes said.

To those that have followed his career over the years, his passion for the community he grew up in won't come as a shock. The U.S. international grew up playing in the same parks he would go on to serve, much like he went on to play in the same stadium he used to attend games with his father as a kid.

"To be able to play professional soccer for the Galaxy was just incredible looking back. Also, winning an MLS Cup there, scoring in an MLS Cup, playing my first home US National team cap at the Stubhub center against Panama, you know, there's a lot of history at that stadium and a lot of achievements and accomplishments for me there. LA is always home cause I grew up there. I even graduated college in the Stubhub Center" Zardes reflected.

Given Zardes' rise from the inner city to professional and international soccer, his journey provides meaningful insight into the popular debate about how US Soccer can attract, develop, and retain top talent from underprivileged areas.

The pay to play culture of club soccer in the US has been a constant debate for years and was central in the discussions surrounding the federation's presidential election that ultimately saw Carlos Cordeiro prevail.

In some ways, the work that the Galaxy foundation and Zardes has been doing in Hawthorne can be a blueprint for US soccer around the country.

Zardes knows the sacrifice a family must make in a community like Hawthorne to play soccer in the current system. For him, it's not just the money that is difficult, but also the time commitment. His father drove him two hours each way for practice during the week growing up so he could play club soccer.

That sacrifice from his father was key for him to make it to where he is today, and many others aren't as fortunate.

"They have to generate a system that allows kids to play for free, but also some of these kids need transportation because a lot of these parents work 9-5 and soccer training is at six. It is hard on parents to get all the way back home and then take their kids to training," said Zardes.

Although Zardes has the obvious deep roots in LA, his move to Columbus has been great for both player and club so far. On the field, Zardes has meshed well with his new team, scoring three goals through their first four matches.

After a strong preseason, Columbus picked up where it left off to start the regular season with an impressive 2-0 win over reigning champion Toronto FC. With the noise of a possible move to Austin still out there, it’s clear that the team has bonded nicely.

Much of the strong start for both Zardes and the team can be attributed to Gregg Berhalter and his coaching staff according to the forward.

“He and his coaching staff are amazing. They are helping simplify the game for me. They’re making things easy and helping me understand my new role and my new teammates,” Zardes explained.

“We had a pretty dominant preseason which carried over into regular season. We are progressing as time goes on and I think we are constantly growing as a team which is great and I look forward to giving it my all each and every day I step on the field,” he added.

Off the field the transition has been equally as smooth even though he leaves behind family, friends and that tight knit Hawthorne community.

“To be honest it hasn't been difficult. This team has helped me tremendously with my move from Los Angeles. My biggest thing was making sure my family could get acclimated and they did. My family was here before me. I think Columbus, Ohio is a great place. I really enjoy living here. It’s a family oriented place and there are a bunch of activities to do as a family so, so far so good,” said Zardes.

With Zardes and his family adjusting comfortably to Columbus, it wouldn’t be surprising to see him start lending time to the community there as he did in LA.

“I am taking my time to find the right opportunity here in Columbus because obviously it’s very important that you just don't rush into things. Because for me once you make it an obligation to do something like this you have to sacrifice that time on a weekly basis. You can't say hey I want to do this and then give up on it. You have to ride it out and whatever time you dedicate you have to be able to do that on a weekly basis,” Zardes said.

It is still early, but for now, it seems like the move may be a great change on the field for both the Crew and the revitalized Zardes. One thing for certain, is at the very least, the player’s presence off the field will benefit the community of Columbus.